What is Burning Man?

The concept of Burning Man seems rather ridiculous at face value.  In a hot and dusty dry lake bed, 120 miles north of Reno, NV, 70,000 to 90,000 people (I've heard different numbers) build a temporary city, once a year. At the end, they remove or burn it down. During that week, Black Rock City, at a population of 70,000 is the sixth most populous city in Nevada (source). 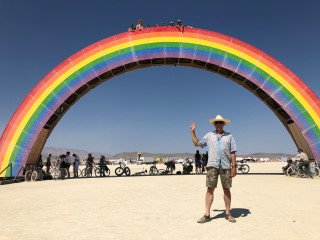 Check out my video of my Burning Man experience.

The purpose of Burning Man is not easily explained, if there even is an official purpose, and I'm sure it's different for each participant.  Some go to party, some to indulge in a drug binge, some for carnal pursuits, some for the art, some to get away from the real world, and for some it is a religious-like calling.  It is difficult to explain Burning Man to those who haven't been.  It is similar to trying to explain the phenomena of a total eclipse of the sun to anyone who hasn't been fortunate enough to observe one.  For some things, you just have to go to truly understand it.

Reasons to Not Go

The reasons to NOT do Burning Man are easier to explain than those in favor. 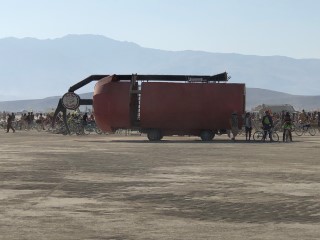 Things I Wished I'd Brought

Before I even try to explain the good points of Burning Man, let me address some questions I have been asked.  There are already a host of resources on what to bring to Burning Man and general advice, which I will not repeat.  I thought I did my homework before going.  For the most part, I was well prepared.  However, here are some things I wish I took along: 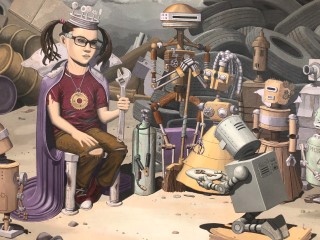 Some Things You Should Bring that Aren't on Most Lists 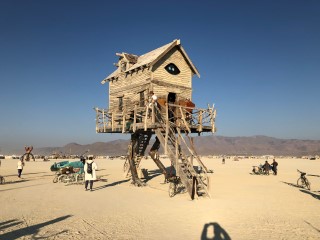 I also want to emphasize that you should protect your feet well.  My biggest mistake was going about in sandals most of the time.  The dust at Burning Man is highly alkaline.  If you're exposed to it for too long, the ph balance in your feet will get out of whack due to a lack of proper acidity.  The consequence can be a case of "playa feet," which is another term for a chemical burn, which I got a bad case of shortly after leaving.  The cure is cleaning your feet well and then soaking them in a mixture of three parts water and one part vinegar.  However, the best cure is prevention.  Keep your feet as protected from the dust as you can with socks and shoes.  If you must wear sandals, clean your feet well and then soak them in a vinegar solution daily, as a preventative measure.

Another thing I wasn't very prepared for is "Playa names."  Much like on the Appalachian Trail, people go by assumed names at Burning Man.  Some people I met there were Mother Goose, Boomer, Rainbow, and Abra (as in "abracadabra").  Some of the others in my group suggested what they called me anyway, "Wizard."  However, I think most people go to Burning Man to escape who they are in real life and live as they really want for a week.  Thus, I wanted a fresh name.  Some friendly neighbors started calling me "Magic Mike," which I answered to, but I would have preferred something that didn't include reference my real name.

I'm not sure why I thought this, but at the time I insisted you couldn't give yourself a Playa name to others in my group with the same dilemma.  In the Delta House initiation scene in Animal House, a new name was given to each of the pledges.  Perhaps I was hoping something like that would happen at Burning Man, but it didn't.  To get to my point, my advice is to forget any tradition of not being allowed to give yourself a Playa name and do so.  Asking for suggestions among your friends is fine, but be prepared with a back-up if they don't come up with anything brilliant that meets your expectations. 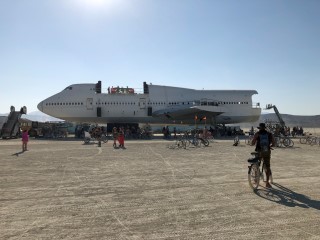 Check out my video of the interior of this 747.

There are a number of ways long-time Burners can identify a newcomer.  That doesn't mean newcomers aren't welcome.  In fact, Radical Inclusion is one of the 10 Principles, which is explained as "Anyone may be a part of Burning Man.  We welcome and respect the stranger."  Nevertheless, who wants to stand out as a noob?  That said, if anyone extends their hand for a handshake, that person is either a noob too, or they are checking if you are.  People at Burning Man don't shake hands, they hug, and do so very warmly and affectionately. 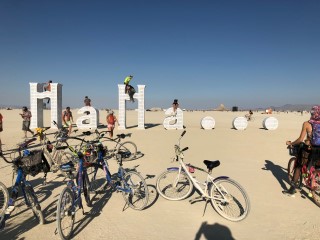 I could go on with Burning Man advice and stories long enough to write a short book, so I'll try to end this with an answer to the difficult question of why one should go to Burning Man.  As I mentioned at the beginning, people go for a host of different reasons.  Here are some, as I perceive them:

I hope this long, rambling article has shed some light on my experience at Burning Man and provided some useful advice to those who go in the future.  In conclusion, I can't say that Burning Man is for everybody. Some people would love it, some hate it, but most would fall in between somewhere.  I think you know which camp you're in.  If this article inspires you to take the plunge, please let me know how it goes. 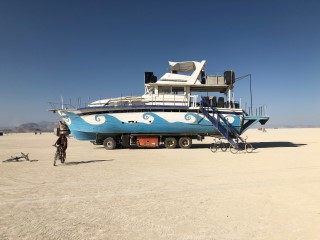 Orange County District Attorney urges possible rape victims at Burning Man or Splash Festival to come forward if they were plied with excessive amounts of alcohol by a Newport Beach surgeon or his girlfriend. DA gave no timeline indications.

Note: Reports of airliner fuselage being stranded in the desert.