Alex Ovechkin Nets the 700th Goal of his NHL Career

On Saturday, February 22nd, 2020 the Washington Capitals left winger, Alex Ovechkin, made history in the record books of the National Hockey League by scoring his 700th NHL goal. He has been one of the best goal scorers over the course of his illustrious career in professional hockey. He has now reached a milestone that only eight players in NHL history have accomplished, and he isn’t done just yet. 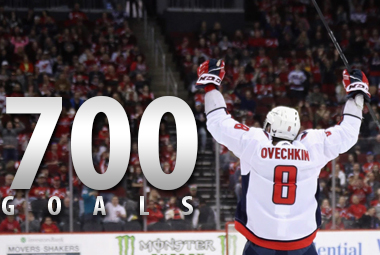 The hard hitting puck slapper drained his 700th historic career goal on the road against the New Jersey Devils in the third period of last Saturday’s hockey game. His Washington Capitals did end up suffering a 3 – 2 loss on this legendary occasion. Currently the Capitals are at the top of the Metropolitan Division with a solid 82 points which is good for the third best record in the Eastern Conference of the NHL.

Ovechkin is the second youngest player in the National Hockey League to reach the 700 mark behind of course Gretzky. He was only 29 years old when he accomplished that milestone back in 1991, and only 886 games compared to “Ovies” 1,143 games to get to 700 goals. Alex is the first Russian player to reach 700 NHL goals.

"It's a special moment," Ovechkin stated. "When you get closer you start thinking when it's going to happen. Finally, it's over so we don't have to talk about it anymore. We're going to move on."

"It was obviously a matter of time, but that was a huge goal for us at the time," Washington Capitals head coach, Todd Rierden explained. "Amazing to be able to watch it live and in person. To be able to go through the last six years with [Ovechkin] has been amazing to watch. Certainly a superstar in my time, the best goal-scorer that I've ever seen."

"I knew even if I didn't score today, we still have 20 games, so one goal I would score," Ovechkin expressed. "It's pretty good company. I am happy to be there."

"It's always special to be in that category but I would say without my team, without my family, without the fans, the support that I have I would never reach that milestone," says Ovechkin. "We have to continue to create history."

"I'm still playing," Ovechkin replied. "But after the year, yeah, I'm pretty sure me and my family and my friends are going to talk about it."

"Obviously we're a little struggling right now, a little tight in our shoulders," Ovechkin proclaimed. "We have to fight through this and everything is going to be OK."