Downtown Grand to be Sold?

Wait a minute, I'm confused.  Is the title of this Article not, "Downtown Vegas Changes?"  I thought that the Downtown Grand opening could be construed as a change in Downtown Vegas given that it happened less than two years ago...
The Downtown Grand opened to such fanfare that, even though my former wife and I visited Vegas for the first time in December of 2013, (two months after the opening of DG) and even though my former wife and I stayed Downtown (at The D) the entire time we were there, I don't believe that we once set foot in the Downtown Grand...because we were not aware of its existence. 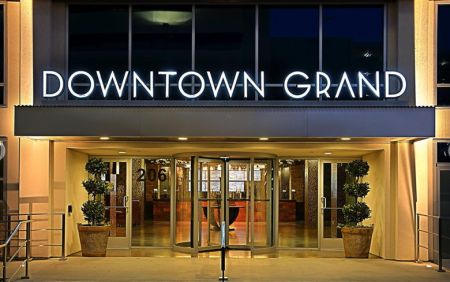 I agree. It does seem very hard to tempt the tourists to detour off Fremont St.I remember when Lady Luck offered you a free five minutes phone call !
They used to have the "Rock around the clock" games but took them away.It really is bad game selection by the slot manager as the locals are not going to play the new 50c minimum penny slots unless there is an edge.
The rooms are very nice with plenty of tv channels and a nice bathroom but I could never make the 9:30am cut off time for the coffee downstairs which was included in a very high resort fee.When I stayed there the pool was closed so I found the RF upsetting.
In some ways I would be more bullish for the LasVegasClub when it reopens as the location is great.

"Personally, I would have just had someone walk along the Fremont Street Experience shouting, "$25-$100 Free Play for new Player's Club Members at Downtown Grand!"

I just stayed there, and found it greatly disappointing. I found our suite in not so good repair and probably of cheap construction to start with, the pool was small, the food less than spectacular, and the staff was rather unfriendly. And yes, the location was kind of unremarkable and also inconvenient. I took days to remember how to get back.

The casino was very sad and slow with the table games either near empty or actually closed.

There was a paper in the room with new member sign up bonuses that advertised how you don't need to go to Fremont because it is all fast food there, and how you should just gamble at the Grand to get all your play on one card. As if anyone would stay there and not go to Fremont.

They desperately need a change. Some kind of draw, any kind of draw to bring people from Fremont or to what to stay there.