On Sunday, January 19th, 2020 the San Francisco 49ers faced off against the Green Bay Packers in the NFC championship game from Levi’s Stadium in Santa Clara, California. The winner of this exciting and highly anticipated match up would represent the NFC in Super Bowl LIV which will be played on Sunday, February 2nd, 2020 at Hard Rock Stadium in Miami Gardens, Florida. 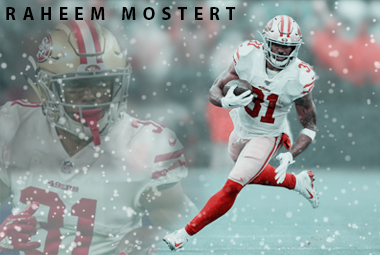 The 49ers completely dominated the Green Bay Packers in the first half of this very important football game. The scoring began in the first quarter when the 49ers line opened up a gaping hole for Niners running back Raheem Mostert to rush in a 36 yard touchdown. That run capped off a 6 play 89 yard drive. San Francisco leads 7 to 0 over Green Bay at the conclusion of the first quarter.

Immediately at the start of the second quarter the 49ers hardened veteran place kicker, Robbie Gould, fearlessly drilled a 54 yard field goal to put the Niners up 10 to 0 early. Following the field goal Raheem Mostert ran in a 9 yard touchdown to increase their lead to 17 points. Robbie Gould drilled another field goal kick, this time a 27 yarder, to tack on another 3 to their score. Finally, Mostert scored his third touchdown of the first half with an excellent effort on this 18 yard run. Mostert had an NFL record setting day on his absolutely incredible ground game performance. The San Francisco 49ers went into halftime with a dominating lead of 27 to 0 in front of their home crowd.

The Green Bay team attempted to come back early in the third quarter when their former MVP quarterback Aaron Rodgers handed the ball off to running back Aaron Jones for a 1-yard touchdown scamper. The 49ers now led the NFL playoff game 27 to 7. What do you know? Raheem Mostert runs in only his fourth rushing touchdown of the evening. His team now increases their heavy advantage to 34 – 7 which held up through the remainder of the third quarter on this crucial contest.

Jones ran in another 1-yard touchdown rush. This brings the score to 34 – 13 after a failed 2 point conversion. Rodgers then hit his target Jace Sternberger on an 8-yard touchdown reception making it 34 to 20 in favor of San Francisco. The final score of this much anticipated sporting event came on a made field goal from 42 yards out by Robbie Gould. The San Francisco 49ers the game in dominant fashion 37 to 20 putting themselves in Super Bowl LIV against the Kansas City Chiefs (Sunday, February 2nd, 2020 at Hard Rock Stadium in Miami Gardens, Florida).

"I did have a lot of doubters and naysayers," Raheem Mostert explained as he has been cut seven different times throughout his NFL career. "Now I get to actually tell them, 'Look where I'm at now.'

"I never gave up on my dreams."

"It was pretty special," Kyle Shanahan stated after getting handed the NFC Championship trophy from his father Mike Shanahan at the postgame ceremony. "To get a trophy handed to you by anyone is really cool. ... It was pretty cool it happened there at the end."

"It's still kind of surreal," says linebacker Fred Warner. "With the stuff this team has gone through, this organization, it's special. Its the pinnacle of football right here."

"He's so fast," tackle Joe Staley proclaimed. "He's incredibly fast. He's fearless going through the hole. He has trust in the linemen to block it up. He's a great running back."

"The lanes that we saw and the way he was running we just wanted to keep feeding him," Shanahan expressed. "I know he was feeling it. That wasn't too hard to see."

"We just weren't very consistent the first half," Rodgers exclaimed. "Made a couple of mistakes personally that hurt us and kind of let it get away from us."

"Right now, they are the gold standard in the NFC," says Packers coach Matt LaFleur regarding the San Francisco 49ers.