Click on any image for a larger version. Image from GoogleMaps.com.

This is a long trail in southwest Las Vegas that mostly follows a flood control canal. I can't say the trail is very scenic, but it is wide, fairly straight, fast, and safely away from car traffic most of the time. The trail gets little pedestrian usage, so is a safe place to bicyclists to go fast.

The trail is badly named, in my opinion, because it intersects neither Tropicana nor Flamingo Boulevards. I guess the name of the wash it parallels is called the "Tropicana Flamingo Wash." However, I've lived in Las Vegas for 13 years and see such flood canals all over the place and didn't even know there were names for them.

These photos were taken starting from the eastern terminus on Russell Road, traveling east. 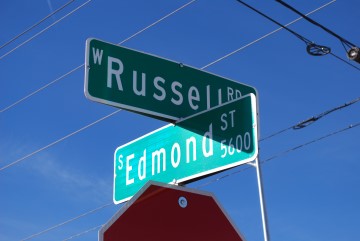 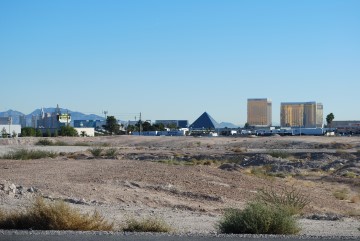 The eastern terminus is at the intersection of Russell Rd and Edmond Street. If you've never heard of Edmond Street, it is half-way between Decatur and Lindell. The picture on the right shows the view of the south Strip casinos with your back facing the trail. If you were to go east on Russell Road it would take you right past the Mandalay Bay. 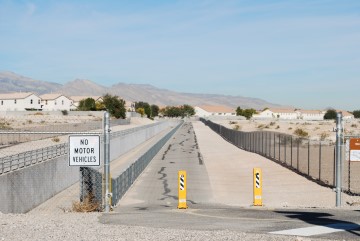 Beginning, or ending if you're traveling the other direction. 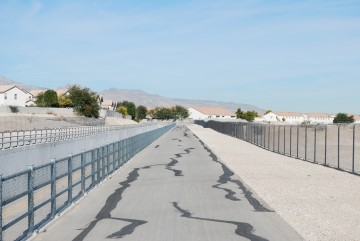 Much of the trail looks like this, as you'll see. 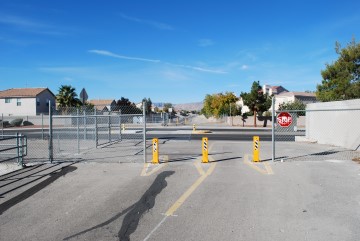 Lindell Rd crossing. Trail continues directly on the other side. 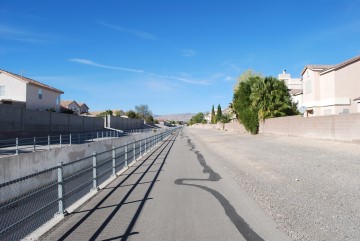 The city does a good job repairing the cracks. 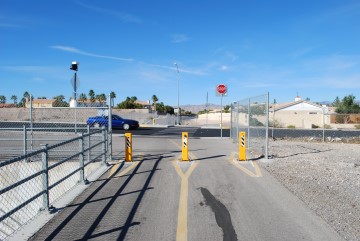 Jones Blvd crossing. The trail continues directly on the other side. 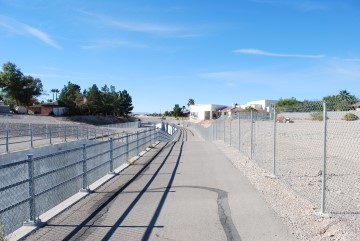 Another clear blue sky in Vegas. 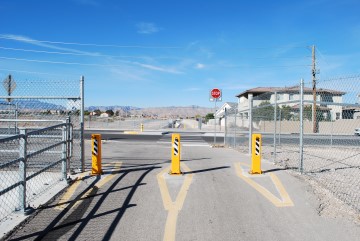 Torrey Pines Drive crossing. The trail continues directly on the other side. 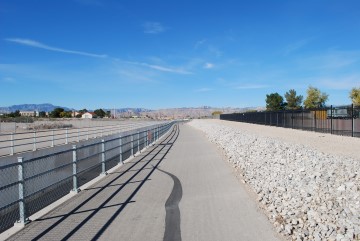 Nothing but you and the trail between street crossings. 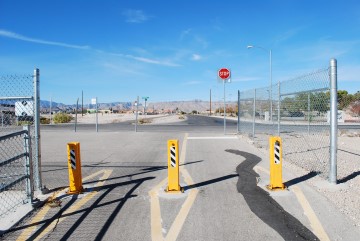 Intersection with Redwood Street. Dewey Drive is straight ahead and the trail is just to the south of it. Here begins the "trail connector" between the two sections that are safely off the streets. The connector is along city streets. 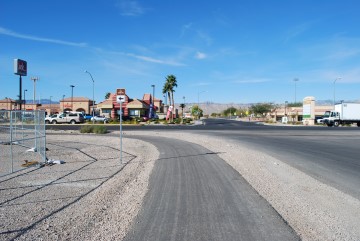 This is Rainbow Blvd. Make a left turn to stay on the trail. 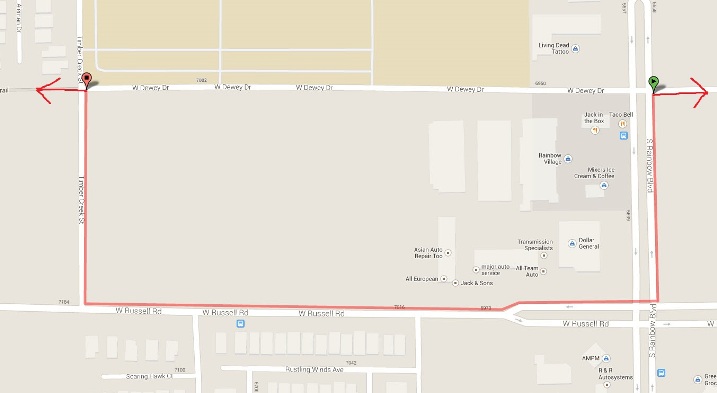 You didn't hear this from me, but the map clearly shows you can take a shortcut on Dewey Drive. There is no crosswalk through Rainbow, so it would necessitate jaywalking. There is an island in the middle of Rainbow to make it easier. 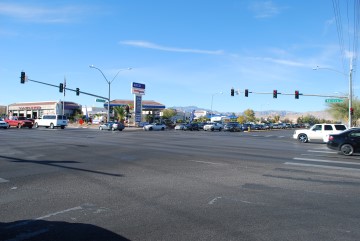 The busy intersection of Rainbow and Russell. 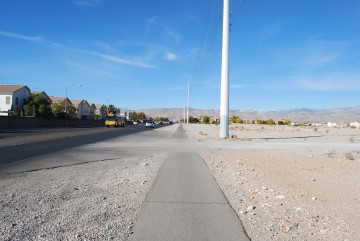 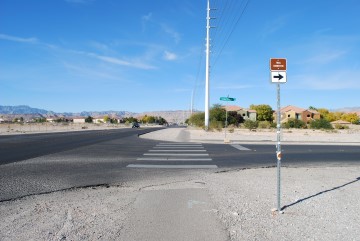 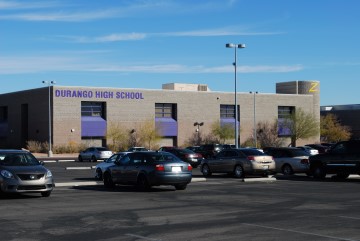 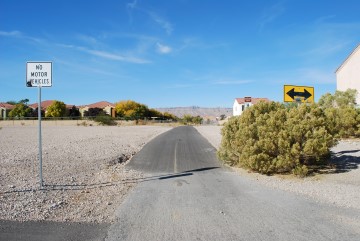 The trail resumes here, directly across from Durango High School. 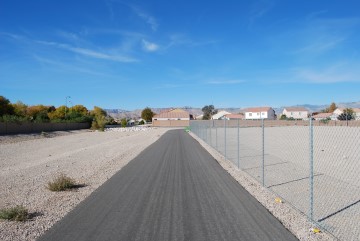 Nice to be back on the car-free path again. 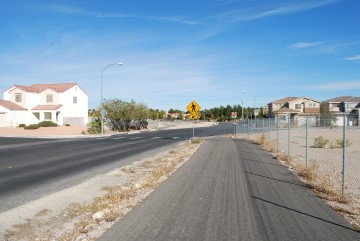 Here is where the trail crosses Tenaya Way. It resumes about 50 feet up the street on the other side. 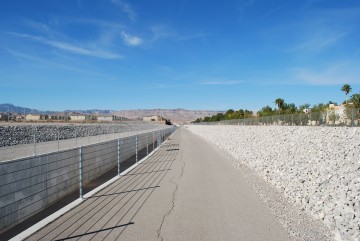 Another straight shot to the next street crossing. 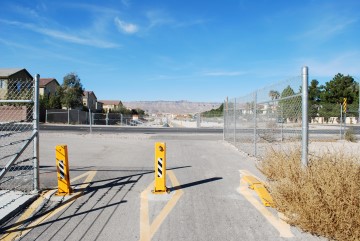 Tioga Way crossing. The trail resumes directly on the other side. 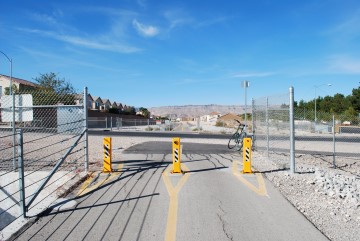 Buffalo Drive crossing. The trail resumes directly on the other side. 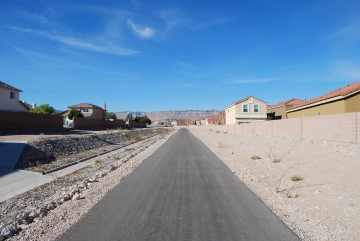 Nary a cloud in the sky. 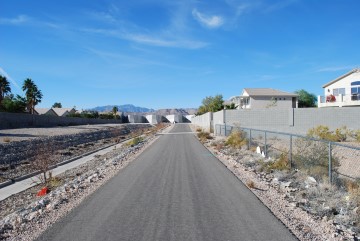 A water detention basin ahead. The trail goes around it, to the right. 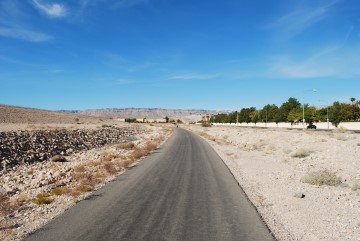 Coming up to the end. 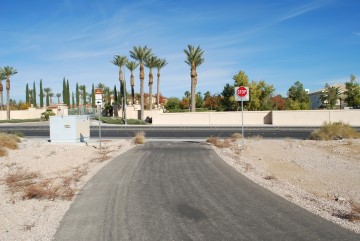 The ending on Hacienda Avenue. That is the very elite Spanish Trail community of Las Vegas straight ahead.

I was curious about that enormous yellow house seen through the gate, so I checked Zillow. It is 105,499 square feet, 29 bedrooms, 39.5 bathrooms, and valued at $50.5 million. In all fairness, I think that includes some other guest houses on the same property. A little further snooping revealed that to be the Las Vegas home of Michael Jackosn while he lived here (Source). I wonder if Michael rode this trail to get his exercise. 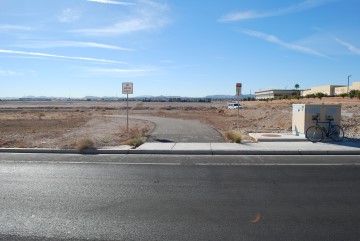 Here is what the trail beginning looks like from this end. 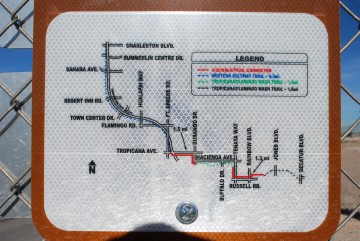 In the unlikely event you get lost, there are lots of these maps along the way.