I'm going to take a brief moment to highjack "my own" thread to a different topic. I have something I want to post, but it doesn't warrant a whole new thread. I was inspired to post it because today is Easter, but I didn't want to add more controversy to the Happy Easter thread.

Five years ago on Easter Sunday, I was a bit low, and I made a cell phone video to share with a few friends. The cell phone I was using at the time was great for the things for which I regularly used it, but terrible for making videos. Both the audio track and the video resolution are abysmal, but my personal videography and narration are even worse. I decided to uploaded it to youtube this morning, in case any of you would like to have a look. It's just over a minute long, and yes, some of my smart aleck nature comes through.

Doc thanks for sharing that cool little video you did it was very nice.
Doc

Doc thanks for sharing that cool little video you did it was very nice.

Then I should take it that it's not offensive to make a pun about a Psalm?
Tiltpoul

Tiltpoul
Joined: May 5, 2010
Circus Circus used to have a special place in my heart. It was one of the first casinos I went into BEFORE I was 21 (many many years ago); the Adventuredome at one time, was a very underrated amusement park. They have a surprisingly thrilling roller coaster (though it seems tame on the surface), and some very high tech rides at its peak. My last trip there, I walked through, and I felt like a creeper among children. It's gone downhill a lot, as did the whole property.

My first trip after I was old enough to gamble I stayed at Circus Circus. At the time, Stardust and Sahara were still open, so it wasn't quite so remote. The rooms were cheap, and I had a decent room. Now the place is overrun by families who allow kids to be out whenever. I was very disturbed by the property.
"One out of every four people are [morons]"- Kyle, South Park
FleaStiff

That is a really terrifying looking clown.
Then again, you don't see many $100 chips at Circus Circus.

Yep, that's a single-color, hot-stamped, Long-Cane-Version Paulson chip, very much like the Carson Nugget chip I posted -- the one they seem to recommend on their site for 25¢ and 50¢ chips. Boring seems like a reasonable description. But thanks for posting it anyway. It's nice to see the variety of chips in everyone's collections.


(Sorry, I was a bit slow to see and respond to your chip.
bigfoot66

Doc
Joined: Feb 27, 2010
You are welcome to guess anything you like, even the Wynn, if you choose. But your guess seems to be more justifiable. Am I supposed to make advance announcements?

BTW, no one ever told me whether they had figured out the method I alluded to for guessing correctly (almost) every day. If you did, you could mention it in this thread, but it might be more fun not to make a public announcement of the method. PM me if you need confirmation.
AcesAndEights

AcesAndEights
Joined: Jan 5, 2012
I stayed at the RV park outside Circus Circus with my family when I was but a wee lad. My parents were not gamblers and my sisters and I were not old enough, but I do remember walking through the casino and marveling at an arcade full of video games they had there. I wished that my parents would slip me a twenty and let me loose in there, alas they were far to cheap for that.

We were there in the summer and the temperature was blistering, especially on the asphalt. I may be inflating the temperature in my memory, but I feel like it was still not much below 100 in the middle of the night. We weren't staying in an actual RV, but rather a tent trailer. While we were there, the showers were broken. One of my sisters was fixing her hair outside the tent trailer and a fellow RV park-er walked by and wondered aloud, "Oh, did they fix the showers?" My sister's hair had become so greasy that it looked like it was wet from out of the shower.

It's amazing I ever went back to Vegas as an adult after that experience, but I guess the trick is to not go in the summer, and not stay outside. We were on a 3 week camping trip around various places in the west; I'm not entirely sure why we stopped in Las Vegas, probably just to see the giant neon signs and other sights.
"So drink gamble eat f***, because one day you will be dust." -ontariodealer
Doc

Doc
Joined: Feb 27, 2010
I agree about the heat. I think that Circus Circus even cranks it up a bit on their property. I have never been to Las Vegas in the middle of the summer -- June and September are the closest I have come. I almost skipped WoVCon last year because it was scheduled for June 15, but we survived.

My first visit to Las Vegas, I went to a comedy show at the Tropicana. One of the comic's lines was: "Some people try to make excuses for the heat here; they say, 'It is a dry heat.' Bull! The thermometer says 125 degrees -- you've got that setting on your oven!"

When my wife and I were still adventurous enough to walk the strip in the daytime on our few June/September trips, we did like all of the other tourists: we walked through every casino along the route, just to go through their air conditioning before stepping back out onto the sidewalk.
Doc

Yes, bigfoot66, you guessed correctly. And I received one PM that gave an effective way to guess my chips for the next couple of months, but there's another way to get a good indicator of the rest of my entire collection. But only for those folks who have been paying attention for a while.

Today's Casino Chip of the Day is from the Reno edition of Circus Circus. According to Wikipedia, the structure started out as a department store in 1957. Expansion plans to add a hotel and casino in 1977 were abandoned when an established casino operator offered to buy the place and convert it to a casino.

After Jay Sarno and friends sold the Las Vegas Circus Circus in 1974, the new owners were incorporated as either Circus Circus Enterprises or Circo Resorts – I can't really figure out the distinction. That company purchased the Reno department store structure and turned it into a copy of the Las Vegas casino and hotel. The new facility opened in 1978, in an era of considerable casino growth in Reno. In addition to the hotel rooms that were incorporated in the 1977-78 conversion, two more hotel towers were opened in the 1980s.

The same company continued to develop new properties in Las Vegas and eventually became known as the Mandalay Resort Group, which was purchased by MGM Mirage in 2004. Result: the Reno Circus Circus is now owned by MGM Resorts International. If you have the funds, they would probably sell it to you.

Circus Circus Reno is the northernmost unit of three large casino hotels that are connected by wide pedestrian bridges over the Reno streets. I think it is possible to enter the Eldorado on 3rd Street, pass through the Silver Legacy and Circus Circus, and exit the Circus Circus parking deck at 7th Street without ever stepping completely out doors. And perhaps without breathing any "fresh" air until reaching the parking deck.

On my only visit to the Reno Circus Circus, I lost a whopping $5 at craps, which was better than my result a few minutes earlier at the Silver Legacy but worse than the game before that at Eldorado. Circus Circus was the fifth of ten casinos that I visited that day to add chips to my collection. Yes, this whole collecting business is a bit of a compulsion. Didn't teddys say something back last Thursday about my being obsessive-compulsive?

Unlike the Circus Circus Las Vegas chip that I posted yesterday, the Reno chip has the same image on both sides. It is (according to one of the on-line references I have been using -- mogh.com) a Chipco ceramic chip (no manufacturer's logo I can see) with a satin finish (which I can verify). That resource says it was issued in 1997 but that the same design with a linen finish was issued in 1995. The edge printing on this chip does, indeed, say "$1", so without further input I will guess that the "tick mark" on the edge of yesterday's chip was a "1" that was just missing the "$". 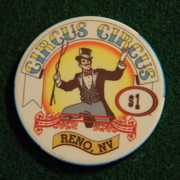