Jay Sarno and associates opened the Circus Circus casino in 1968 without a hotel. The main structure is shaped like a giant circus tent, and circus acts performed to entertain the family and perhaps to distract the gamblers. It looked pretty neat in the James Bond film Diamonds are Forever, but that aspect of the facility had been scaled back significantly the last time I looked for it. It seems that nowadays, in Las Vegas the word "circus" more often implies gymnasts from Canada and eastern Europe.

Circus Circus was not a big financial success for Sarno, and it faced the same challenges (federal accusations of ties to organized crime) that he was encountering at Caesars Palace. Sarno and his partners sold Circus Circus in 1974. Several hotel towers, low-rise hotel units, and an RV park were added – the only RV park on the strip. There is also The Adventuredome, a carnival-midway styled arcade area.

I was quite disappointed the one time I tried the buffet at Circus Circus, but I have heard that the steak house is really good. Never been there myself.

Circus Circus now belongs to MGM Resorts International, although MGM seems to try to hide that fact. A couple of years ago, the Slots-a-Fun casino right next door merged under the same license with the Circus Circus casino, but I plan to post the Slots-a-Fun chip separately when this thread gets to "S".

I cannot find a manufacturer's logo on the ceramic chip shown below, but an on-line resource indicates that this is again a Chipco chip with a satin finish and that it was issued in 1999. The two images are opposite faces of the same chip. The edge marking includes three pink bands that match the color on the faces. Between those edge bands are single vertical bars or tick marks that I suppose could be the numeral "1", though there is no accompanying "$". If any of you have a $5 Chipco ceramic chip from Circus Circus, perhaps you can tell us whether the edge says "5" or just has the same tick mark. 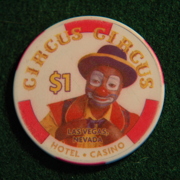 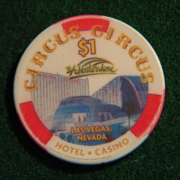 Doc
Joined: Feb 27, 2010
I'm going to take a brief moment to highjack "my own" thread to a different topic. I have something I want to post, but it doesn't warrant a whole new thread. I was inspired to post it because today is Easter, but I didn't want to add more controversy to the Happy Easter thread.

Five years ago on Easter Sunday, I was a bit low, and I made a cell phone video to share with a few friends. The cell phone I was using at the time was great for the things for which I regularly used it, but terrible for making videos. Both the audio track and the video resolution are abysmal, but my personal videography and narration are even worse. I decided to uploaded it to youtube this morning, in case any of you would like to have a look. It's just over a minute long, and yes, some of my smart aleck nature comes through.
teddys

That is a really terrifying looking clown.
Then again, you don't see many $100 chips at Circus Circus.
Nice video.
"Dice, verily, are armed with goads and driving-hooks, deceiving and tormenting, causing grievous woe." -Rig Veda 10.34.4
Johnzimbo

Johnzimbo
Joined: Sep 29, 2010
I have the same chip as Doc as well as this boring one

FleaStiff
Joined: Oct 19, 2009
>They even have a three-hour happy hour with very low table limits, without seeming to attract a bunch of lowlifes.
>"25¢ Roulette" and "$3 Craps", very nice facility right there close to the strip. Not a bad way to spend your 5-8 P.M. time slot.

Quiet, sedate and yet a low-rollers paradise. Supposed to have had a very friendly and entertaining craps crew at one time too. One craps dealer elsewhere started going there with his craps and poker pals regularly after an out of town visitor dragged him there initially. Don't know what it like now though.
s2dbaker

That is a really terrifying looking clown.
Then again, you don't see many $100 chips at Circus Circus.
Nice video.

That immediately made me think of The Sisters of Perpetual Indulgence:

WongBo
Joined: Feb 3, 2012
oh admit it, you were ALREADY thinking about her!
In a bet, there is a fool and a thief. - Proverb.
zippyboy
zippyboy
Joined: Jan 19, 2011
And don't forget that when CC opened, not only did it not have a hotel, but they charged admission to get in. There were actual circus acts taking place around the casino, which distracted players from the real task of gambling, and in one famous story, a trapeze artist fell and plunged to the airbag below. The whoooosh of air released from the airbag knocked all the cards off adjacent BJ tables. They had an elephant picking the keno numbers. They had the biggest neon sign Yesco had ever built at the time. Circus Circus was always thought to be a low-rollers joint in a time when every other casino was actively soliciting whales, however, when CCE finally went public and they opened up the books, every other CEO was amazed at the profits CCE had been raking in from the volume, volume, volume. CCE went on a buying/building spree adding Luxor, Excal, half of Monte Carlo (along with Steve Wynn), Mandalay Bay, Edgewater and Colorado Belle in Laughlin, and three places in Reno, as well as the only RV park on the strip.

(photos to follow in a bit)
"Poker sure is an easy game to beat if you have the roll to keep rebuying."
s2dbaker

oh admit it, you were ALREADY thinking about her!

"Poker sure is an easy game to beat if you have the roll to keep rebuying."
RSS Feed