WongBo
Joined: Feb 3, 2012
there are usually solid color chips and chips that have striping on the side.
sometimes the latter will have cash value printed on them as well.
it is mainly for use when someone buys chips at a high denomination
and makes it easier for the dealer to watch high value inside bets.
In a bet, there is a fool and a thief. - Proverb.
WongBo

WongBo
Joined: Feb 3, 2012
there is an excellent resource for chip collectors at the museum of gaming history...

CHIP GUIDE, MUSEUM OF GAMING HISTORY
In a bet, there is a fool and a thief. - Proverb.
s2dbaker

Let me disabuse you of that notion. CaliMont Station serves dishwater coffee.

So it's still better than instant decaf, right? ;)

You can get a decent cup at the Dunkin' Donuts at Fremont for $2.00+tax.

I've tried DD coffee. Decent just about covers it. But it's a much better than the half-burnt swill they serve at Starbucks.
Donald Trump is a fucking criminal
Doc

i am not sure if you mean that you only collect chips that you have actually procured in person.

That's what I mean. If I survive, I am sure I'll be back to The D again in the future to get a chip. I just would prefer to get it in May if they have them then.

Doc, you may want to ask NicksGamingStuff about D chips. You do know, he deals there, right? (I think this is public information by now).

I once asked directly whether that was the place, but I didn't get a direct answer. Maybe it's a case of, "I can't say it right out loud." There was an offer from NicksGamingStuff to get and hold a chip for me, but I at least have the patience to wait until a visit when they have the new chips in play. Las Vegas is not nearly like the other places that I go to just to get a chip – I just add new Vegas chips to the collection next time I am in town.

What WongBo said. The 39 mm ones are the size I usually encounter. I assume these promo chips are larger so that they don't get mixed in with the chips in the trays/stacks.
Doc

Lots of uncertainty (on my part) today regarding names, ownership, and the like.

The Casuarina, also known as the Westin Casuarina because of its being a member of that upscale division of Starwood Hotels and Resorts, is off-strip to the east by a long block on Flamingo Road. It is a stone's throw from the back end of Bally's, provided you have a fairly good throwing arm. All of the outdoor signage says "Westin" much more prominently than "Casuarina." Their web site just calls the hotel "Westin Las Vegas" and only applies the name Casuarina to the casino.

The CasinoCity.com directory does not mention the casino under any name at all, so far as I can find, and I don't really understand that. Since my chip says Casuarina and this site has a dedicated forum with that name, I'm sticking with it.

The casino has operated as the Casuarina since 2003, having been closed for some time after previously being known as the Maxim. In 1996, while in a car in front of the Maxim, rapper Tupac Shakur encountered a fatal volley of gunfire. Except according to those who claim he is still alive.

It would be good to have the kind of input that pacomartin often provides, because I am not even clear on who owns the casino. The NGCB list of non-restricted licenses says it belongs to Wimar Tahoe Corporation under control of William J. Yung. This is the same Yung family that, through their Columbia Sussex venture, had such extreme troubles with the Tropicana Atlantic City. Wikipedia, in discussing that fiasco, says that the Westin Casuarina was not involved in the Columbia Sussex bankruptcy but that in 2010 it forfeited on its mortgage and there was a foreclosure. Lots of details I don't know about, I suppose. I don't even know whether Columbia Sussex is really the same company as Wimar Tahoe Corporation. Anyone have some useful input here?

I have long been curious about the choice of the Casuarina name. Apparently it is/was also the name of a resort in the Cayman Islands that was owned by the same folks who applied this name to their property in Las Vegas. I didn't even know what "casuarina" meant until I checked a dictionary:

casuarina
noun
a tree with slender, jointed, drooping twigs that resemble horsetails and bear tiny scalelike leaves. It is native to Australia and Southeast Asia, and is a valuable source of timber and firewood. • Genus Casuarina, family Casuarinaceae.
ORIGIN from modern Latin casuarius ‘cassowary’ (from the resemblance of the branches to the bird's feathers).

I suppose an Australian/Asian plant provides a suitable name for a Las Vegas casino/hotel where you can receive treatments in their Hibiscus Spa. It just isn't a name I would anticipate. It sounds more like something meant to confuse people.

The Casuarina casino has always impressed me as a quiet, almost relaxing place, in contrast to most other casinos in Las Vegas. They even have a three-hour happy hour Monday through Thursday with very low table limits, without seeming to attract a bunch of lowlifes. The billboard visible in Google Maps Street View says "25¢ Roulette" and "$3 Craps", all this in a very nice facility right there close to the strip. Not a bad way to spend your 5-8 P.M. time slot.

The Casuarina chip shown below does not mention "Westin" at all. I guess fair is fair if the hotel and the casino inside it don't want to recognize each other. It is a blue chip with pink and gray edge inserts and a Reversed Hat and Cane design from Paulson.

If anyone has Maxim chips, I think this would be a fine place to post images. I don't have one in my collection. Post other Casuarina chips, too, of course. 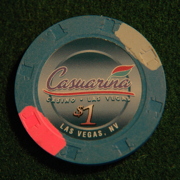 ok, so mm is millimeters in this case. Are Roulette I and Roulette II also size instructions?

Probably not... just to indicate two totally separate color schemes either for separate tables or a backup set. When someone "loses" a roulette chip at coloring-up time, the croupier must stack all those chips and make certain the set is complete. Although it has no cash value at the cage they don't want someone hoarding chips when they are worth ten dollars and then sneaking them back onto the table when worth one hundred dollars.

I think this is a small order for an opening party or something. Either D chips will come later or they will keep using Fitzgerald chips for awhile.
Doc

I think this is a small order for an opening party or something.

I thought it was interesting that for the designs with multiple colors, they specified the quantity for each color, but for the others they didn't identify a quantity at all. I don't understand the sometimes-yes-sometimes-no character of listing quantities in the Chip and Token Report.
rdw4potus

I really like playing at the Casuarina. It's quaint without being dumpy. Small, but (kind of) classy.

And, Doc, casinocity lists it as "the westin..."
"So as the clock ticked and the day passed, opportunity met preparation, and luck happened." - Maurice Clarett
1BB

1BB
Joined: Oct 10, 2011
Ah the Casuarina my old stomping ground. It was called the Maxim back then. I'll bet you didn't know that the Griffin Detective Agency had an office there.
Many people, especially ignorant people, want to punish you for speaking the truth. - Mahatma Ghandi
RSS Feed