It seems to me that the Aria is one of the few casinos in Vegas with no discernible theme at all.

I would say "one of the growing number of Vegas casinos without a discernible theme at all."

But perhaps there should be a thread for that.
Donald Trump is a fucking criminal
Doc

As for the Aria chip design, it struck me as identical to the Bellagio's when I first saw them. I guess they might be interchangable.

My Bellagio chip, coming up in a week, looks nothing like the Aria chip I posted, other than that they both have a bit of blue. We'll have to see what MathExtremist's Bellagio chip looks like to see how it compares to the Aria one. Ah, the suspense! Almost anything to keep folks coming back to the thread. :-)

I expect Aria and Bellagio would indeed accept each other's chips at a table or at the cashier with no problem. Unless, perhaps, your Bellagio chips looked like the ones that bozo on the scooter ran off with.
Ayecarumba

My Bellagio chip, coming up in a week, looks nothing like the Aria chip I posted, other than that they both have a bit of blue. We'll have to see what MathExtremist's Bellagio chip looks like to see how it compares to the Aria one. Ah, the suspense! Almost anything to keep folks coming back to the thread. :-)

Hmm, now I'll have to dig my little collection out of the closet to refresh my memory. I regret not keeping track of the dates when I picked them up.
Simplicity is the ultimate sophistication - Leonardo da Vinci
Doc

Doc
Joined: Feb 27, 2010
When you dig them out, get some photos ready to post so that we can make comparisons.

I have no idea how many series of chips we might have collected as a group, and I have no denominations except $1 myself. There are probably lots of alternate designs in the hands of our members, and I am hoping we can get a lot of images posted of chips at least one of us has in hand. I just want to do it in an orderly fashion (such as alphabetical within state) so that it isn't an overwhelming task to locate a particular posted image later on.
MathExtremist

When you dig them out, get some photos ready to post so that we can make comparisons.

I have no idea how many series of chips we might have collected as a group, and I have no denominations except $1 myself.

Most of mine (and it's really only about 2 dozen or so) are $1 chips from various NV casinos. I have one $5 Bellagio chip as well, and then a 5 chip (no currency indicated) from one of the Holland Casinos in Amsterdam, plus a 100Fr chip from the American Salon at Casino de Monte Carlo. That one brings back memories.
"In my own case, when it seemed to me after a long illness that death was close at hand, I found no little solace in playing constantly at dice." -- Girolamo Cardano, 1563
Doc

Arizona Charlie's Decatur is a locals casino situated 3 miles or so roughly due west of the Las Vegas Premium Outlet Mall, which (in case you are not familiar with it) is between I-15 and Main Street, half a dozen blocks before you get to Fremont Street. That should give you a vague idea of the casino's location, suitable for the purposes of this thread. If you plan to go there, you can look for your own, better directions. Perhaps this is an appropriate place to ask the question: What's the deal with "locals" casinos having hotels? Other than the Wizard doing a review, do folks regularly need hotel rooms in the town where they live? Sounds more like a topic that suggests secret liaisons, doesn't it?

Back more on topic, at their café, they regularly run a $2.99 (with player's card), 24-hour breakfast deal that includes two eggs, hash browns and choice of bacon or sausage and toast or biscuit and gravy. I think you can get it with a ham steak for $3.99. Now that's a deal you can hardly beat for the combination of food quantity, quality, and price. Unfortunately, this is a locals place, and a deal like that attracts people who bring their twelve screaming kids along for the chance to dine out. Let Dad gamble a little while Mom wrangles the rug rats in the café. At least that was what I encountered on my only visit. YMMV.

Just to stomp all over the Wizard's "I'll focus on the actual casino names" approach, I checked Wikipedia, looking for some info on the origin of the name. Along the way, I learned that the place was originally constructed as a bowling alley in 1963, with the casino added on in 1988. A casino expansion in 1994 involved demolition of the bowling alley and some adjacent businesses. The name is supposedly a reference to the original owner's distant relative "Arizona" Charlie Meadows, who performed in Buffalo Bill's Wild West Show. Don't blame me if that is untrue; I just stole it from Wiki.

As has been the case with so many other casinos, the ownership of this one went through bankruptcy, with the major creditor claiming the lion's share of ownership. Unless something has changed since I last checked, this casino, its namesake across town (look for that chip tomorrow, along with comments on alphabetizing), and the Stratosphere are under the same ownership now.

Since I asked the question about Aliante Station, I'll repeat it here: How many members here have ever made it to Arizona Charlie's Decatur? 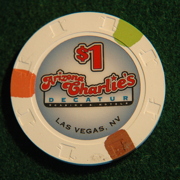 Edit 3/28/12: I have just received from rdw4potus the links to some images of his chips from casinos that I have already passed in this thread. Thanks, rdw! I am editing my posts to include his images, such as this one:

bigfoot66
Joined: Feb 5, 2010
I have been there. I was down a few hundred bucks for the trip and decided to check out of the El Cortez. I went down that way to go to the Original Pancake House across the street and then went into the casino. I played their double deck game and won about $500 in 15 minutes and got the hell out of there, got on the 15 south and headed home. The place struck me as a bit dingier than a downtown casino and I have not since returned. Very little reason to go there.
Vote for Nobody 2020!
Doc

The place struck me as a bit dingier than a downtown casino and I have not since returned. Very little reason to go there.

Yes, perhaps, but this thread hasn't yet made it to the really scuzzy establishments. Congrats, though, on recovering your bankroll there.
Wizard
Administrator

Wizard
Joined: Oct 14, 2009
Arizona Charlie's Decatur is the 4th or 5th closest casino to my house. In my estimation it has the worst air quality of any casino in Las Vegas. Once you step through the doors the stench of tobacco smoke is overpowering. There is no safe spot in the casino to escape it, except for a self-enclosed non-smoking slots room. I actually didn't know about this room until my last visit there. It is not well marked at all.

The clientele of ACD for the most part look like some very haggard human beings. Many of them are in those motorized scooters and/or pushing around an oxygen tank. Come to think of it, I think I wouldn't turn down an oxygen tank if I had to play there. However, in their defense, if you're living off of a small Social Security check, then I think you could stretch it a long ways at ACD. Everything is cheap and the limits are low. Definitely a place to kill time on a low budget, waiting to die.

I should add that if you observe the Sabbath and must attend services, ACD is the closest casino to an Orthodox Jewish temple in Las Vegas. A very devout friend of mine, who is probably a millionaire, stays there on Friday nights for that reason when he is in town. Hopefully the man upstairs appreciates the sacrifice.
It's not whether you win or lose; it's whether or not you had a good bet.
teddys

teddys
Joined: Nov 14, 2009
You forgot to mention, that $3.99 breakfast deal includes steak! That's the only redeeming feature of ACD. I've been a couple times. They used to have a really good coupon deal in the ACG for blackjack, and you could use it as many times as you wanted. It's a dark, dingy dump. If you looked up "locals'" casino in the dictionary, you should see a picture of ACD.

The only place I've ever seen to offer $4 minimums on blackjack. I assume they did not have quarter or $2.50 chips.

Any casino built after 1992 in Nevada must have a 200-room hotel to get a non-restricted license.
"Dice, verily, are armed with goads and driving-hooks, deceiving and tormenting, causing grievous woe." -Rig Veda 10.34.4
RSS Feed