Wizard
Joined: Oct 14, 2009
Here is a picture of the Aquarius from my Laughlin article. Largest casino in Laughlin by both table games and hotel rooms. Second in slots. I've stayed there a few times when it was the Flamingo Hilton. 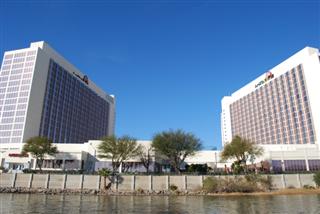 It's not whether you win or lose; it's whether or not you had a good bet.
Johnzimbo

Johnzimbo
Joined: Sep 29, 2010
I know at one point I had a $1 chip from the Flamingo Hilton but must have lost it. Arghhhhhh.
Doc

... but must have lost it. Arghhhhhh.

Maybe someone pirated it from you.
Doc

Another day, another dollar.

Sorry. My compulsions would have forced me to use that quip eventually in this thread, so I thought it would be best to get it over with early.

Today we finally get to a casino in Las Vegas, at least according to the wording on the chip. Of course, the Aria, as the only casino to my knowledge in MGM Resorts City Center complex, is south of center on the strip, in Paradise (I think) and well outside of the Las Vegas city limits. This is what I meant in an earlier post of this thread about being a "little loose" with the name of the city in the post header.

Aria opened in December 2009, I believe, and I picked up this souvenir chip in January 2010, the only time I have played the tables there. After about a month of play, the chip is not exactly mint-out-of-the-tray new, but it is in outstanding condition compared to most of my beat-to-smithereens samples. (If I had the resources and inclination to collect $5,000 chips, they probably wouldn't be as filthy and chipped as the ones that I do have.) I like this chip's clean design, the fact that the name of the casino is molded into the chip (a high-class feature, in my opinion), and the nice mix of colors for a "white" chip.

The Aria hotel and casino is situated well back from Las Vegas Boulevard, actually closer to I-15, as the crow flies. I have walked there from the strip, ridden the tram down from Bellagio, and driven to the parking garage between Aria and the Mandarin Hotel. No matter which transportation mode I choose, the Aria seems a little more complex to get to than most other casinos in Las Vegas. And sometimes they even make it a little harder for you: as a comment to a thread here about the nearby Cosmopolitan of Las Vegas, I posted a photo of some amusing signage inside the Aria garage. I suppose that being dropped off at the front door by a limo would be convenient.

I haven't been in the Aria in more than a year, but my residual impression is one of a high-class décor, lighting a little dimmer than I like, and a number of reasonably quiet restaurants, bars, and lounges surrounding the gaming floor, making for an overall pleasant environment. And the only time I gambled there, I broke even exactly (up a souvenir $1 chip), after toking the dealers, which perhaps contributes to an overall pleasant memory.

Edit 5/27/12: Check this post later in this thread about UV images visible on this and other chips.

Edit 3/28/12: I have just received from rdw4potus the links to some images of his chips from casinos that I have already passed in this thread. Thanks, rdw! I am editing my posts to include his images, such as this one:

the fact that the name o the casino is molded into the chip (a high-class feature, in my opinion)...

I believe all mgm property chips are molded this way.

Do you consider Circus Circus and Slots-A-Fun to be MGM properties? If not, then how about Monte Carlo? Or New York New York? None of my chips for those four casinos have the casino name molded into the chip. Stick around here, and I will show them.

But you are indeed correct about most of the MGM Resorts casino chips, at least in Las Vegas, so thanks for contributing to the discussion. And there may be another chip series for some of those four properties I listed that have this feature too. If you have some like that, please post photos to the thread when we get to that casino; I'm hoping that lots of other members will post photos of their alternate chips designs at the appropriate points.
Ibeatyouraces

When I played at NY-NY and MC earlier this year, the name is molded in.

Excellent! Maybe someone will post a photo of that style chip when we get to the M's and N's, so we can make comparisons.

Same at Bellagio and Mirage.

Agreed. My chips from those two (as well as several others) have the names molded in the perimeter.

Although mgm owns CC, they wont admit to it.

Yeah, that's why I started out with, "Do you consider ....?"
Wizard
Administrator

Wizard
Joined: Oct 14, 2009
In this thread I think I'll focus on the actual casino names. In this case we all know that an aria is a vocal solo in an opera. It can still be accompanied by music, but must be just one singer. Given that, I never noticed any kind of operatic or musical theme to the Aria. It seems to me that the Aria is one of the few casinos in Vegas with no discernible theme at all. Somebody correct me if I'm wrong (as always, and I often am).
It's not whether you win or lose; it's whether or not you had a good bet.
MathExtremist

When I played at NY-NY and MC earlier this year, the name is molded in. Same at Bellagio and Mirage. Although mgm owns CC, they wont admit to it.

The Bellagio chips have always had the name molded in around the perimeter. I have a souvenir chip from shortly after they opened, two years before MGM bought Mirage Resorts.
"In my own case, when it seemed to me after a long illness that death was close at hand, I found no little solace in playing constantly at dice." -- Girolamo Cardano, 1563
RSS Feed