The Aliente Station ....
A question that comes to my mind is what does aliente mean? ....

I can't help with the translation from whatever language this started in, but maybe I can give a hint: the spelling is "Aliante", not "Aliente". Perhaps you can find something useful from that.
WongBo

This book claims it means TO SOAR...but not referenced:

Unofficial Guide to Las Vegas 2011
In a bet, there is a fool and a thief. - Proverb.
Doc

Doc
Joined: Feb 27, 2010
Ah! Italian seems quite plausible, given the casino chain was founded by the now late Frank Fertitta, Jr. and is run by his two sons. I know nothing about them, but the name certainly sounds Italian.
Wizard
Administrator

I can't help with the translation from whatever language this started in, but maybe I can give a hint: the spelling is "Aliante", not "Aliente".

Doh! However, my point about liante meaning swindler remains valid, although the Italian theory seems to hold more water.
It's not whether you win or lose; it's whether or not you had a good bet.
WongBo

WongBo
Joined: Feb 3, 2012
I love that they intended it to mean "to soar" or "gliding" but it has the unintended meaning of 'at the SWINDLER'.
Totally appropriate for a casino! Like my signature says..a fool and a thief...
In a bet, there is a fool and a thief. - Proverb.
s2dbaker

Doh! However, my point about liante meaning swindler remains valid, although the Italian theory seems to hold more water.

Well, just to bring the discussion back to casino chips, I'll go ahead and post a new chip-of-the-day while all of us in the USA are on the same calendar date.

Based on info I stole from another site, the Aquarius started its life in 1990 as "The Flamingo Hilton Laughlin" -- perhaps just one of a line of casinos losing the use of the Hilton name, including the ones in Las Vegas and Atlantic City. The name was changed to Aquarius when Harrah's sold the casino half a dozen years ago.

According to the Wizard's Laughlin review, the Aquarius is the largest casino and hotel in Laughlin. Check out that entire review, if you haven't already. Outside of the casino is one of the beautiful places to walk along the river, though they don't have a beach.

I collected this chip during my first visit to Laughlin, in 2008. As I have posted previously, I really like the Las Vegas strip, but I can only take the noise and neon for a few days at a time. Then I have to get away, decompress, and return for more fun. I'm far too cheap to fly across the country just for the three days until I start to feel the negative buzz in my head, and the get-away-for-just-a-while option often works.

On our May 2008 visit to Las Vegas, my wife and I took our pressure-release escape to the Grand Canyon for a couple of nights. On the way back to Las Vegas, we spent two nights in Laughlin (immediately after Bike Week), and I added almost all of that city's casinos to my chip collection. Later, I learned about Avi Resort and Casino out south of town and had to pick up that chip on a subsequent visit.

My most recent visits to Laughlin were in January and May of 2010, on similar detours from visits to Las Vegas. I did not gamble at the Aquarius on either of those visits to town, but I did pick up dinner at their Café Aquarius that January. 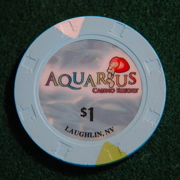 The colors in this image are quite a bit truer than those of the previous image in the thread.


Edit 3/28/12: I have just received from rdw4potus the links to some images of his chips from casinos that I have already passed in this thread. Thanks, rdw! I am editing my posts to include his images, such as this one:

I'd never heard of the word before. I had to go to the dictionary to find it. It's there, and it does mean that. The question is how you manage to come up with such rarely-used, very obscure words now and again?

If you wanted to say "at the swindler" you would say "al liante." However, the two ls would come blend together, so it would sound like aliente. I wonder if this has a bearing on their Latino business. Sorry to turn this into another Spanish Word of the Day.

Would you go to a casino called "at the swindler"? I'm honestly puzzled at the suggestion.

I vote for the Italian.
Donald Trump is a fucking criminal
Ayecarumba

Ayecarumba
Joined: Nov 17, 2009
Interesting design on the insert. Is it supposed to be clouds or water in the background?
Simplicity is the ultimate sophistication - Leonardo da Vinci
Doc

Interesting design on the insert. Is it supposed to be clouds or water in the background?

So that's my guess. I had never really paid attention to the insert background.
RSS Feed