Tiltpoul
Joined: May 5, 2010
I enjoy Mandalay Bay, though there is an overpowering aroma as you walk through; not as distinct as Venetian, but kind of similar to it. They used to have a GREAT BJ pit, with S17, Surrender and RSA, with $15 table minimums at off peak hours. The pit is still in the same place, but the rules have changed to H17. At one point they had a Double Deck game, same rules except no RSA but S17, but every time I played on that table, I got killed...

It'll be interesting to see how the Michael Jackson Cirque Show does there, considering Viva Elvis is on its way out.
"One out of every four people are [morons]"- Kyle, South Park
Doc

I guess this is proof that I don't see much of the scenery while I am driving....

At the bottom edge of the photo on the center inlay of each of these chips, you can see part of a small building. I don't think I have ever noticed it when I have driven by, but I just checked the images on Google maps, and sure enough it is right there at the S.W. corner of S. Las Vegas Blvd. and W. Hacienda Ave. It appears to be something in a Greek or Roman style with columns and porticoes, and it is surrounded by water. Does anyone know what that is?

It seems a shame that I should miss a structure like that until seeing its roof on a chip inlay. The whole area looks like a garden of some kind that (to me at least) has been hidden in plain view.
Nareed

Nareed
Joined: Nov 11, 2009
On my first two trips to Vegas, I did more sight-seeing than gambling. During the first trip I did not go to MB, because I judged it was too long a walk from the Luxor. I had no idea there was a tram connecting both properties! :)

Anyway, I did go on my second trip, I looked around and eventually left. I suppose if you're not staying there, and you don't like the shark acquarium (and I don't), there's not much to draw you there. On my third trip I enarly did stay there. Had they not charged resort fees, I think I would have chosen it over the Rio. Now I like staying Downtown, so it looks like MB will remain nothing but a landmark on the way to the outlet mall as far as I'm concerned :)
Donald Trump is a fucking criminal
bigfoot66

Here's my Mandalay Bay chip. It's also a Paulson chip with 6 edge inserts, but they're evenly spaced. I think I like the triplets better..

Looks like 12 total inserts to me, 6 couplets (right word?).

I suppose it's a matter of perspective. The chip I posted and described as having "six edge inserts in two triplets" is described in the MOGH catalog as "Inserts: 2 PI/RD/OR". I interpret that as meaning they think there are only two inserts and that each is a combination of pink, red, and orange. Apparently I don't even agree on the colors. The fluorescing insert/section that I called pink is the one they called "RD".

For the chip that rdw4potus posted, MOGH says "Inserts: 6 WHITE/GOLD". Just call it the way you see it, I guess.
rdw4potus

Here's my Mandalay Bay chip. It's also a Paulson chip with 6 edge inserts, but they're evenly spaced. I think I like the triplets better..

Looks like 12 total inserts to me, 6 couplets (right word?).

LOL! yes, 12. I just looked at the preview image when I wrote that, and on the smaller image it looked like it was all one color. D'oh!
"So as the clock ticked and the day passed, opportunity met preparation, and luck happened." - Maurice Clarett
AcesAndEights

On my first trip to Vegas where I actually gambled, we were staying at the Trop, so I walked over to MB on the advice of a friend who said the waterfalls were kind of scenic. I have to agree; I was definitely pretty tired and drunk at the time, but I seem to remember a very long walk if you're walking in off of the strip, and there are waterfalls all around you. It's an interesting effect.

I then proceeded to lose $600 playing blackjack using the absolute worst donk strategy ever. This was before I was an informed gambler. I did make all of that money back on the same trip after I learned how to play Craps. Ah, the good times when $600 seemed like a lot of money to lose or win on one trip.
"So drink gamble eat f***, because one day you will be dust." -ontariodealer
Doc

The Margaritaville casino is just an area of the Flamingo casino operating under the Margaritaville banner. The MOGH catalog lists the chips right along with other Flamingo chips. However, the chips do say "Margaritaville Casino", and there are other Jimmy Buffett-licensed Margaritaville casinos open or on the way in other cities. The man created a trademark with one song, and it's still serving him well 35 years later. With this projected growth of the name/emblem in the casino realm, I feel adequately justified in presenting this chip with a day of its own.

My wife and I had previously dined several times at the Margaritaville restaurant at the corner of the Flamingo property, just across the alley from O'Sheas, and I think the casino opened the first of October last year. I picked up my souvenir chip during my visit to Las Vegas for WoVCon][ in May.

I looked for a chip while playing/losing at craps. By the way, that crap table is almost as close to the street as the one used to be at Slots-a-Fun, but at least at Margaritaville there is a glass door, and you are in the air-conditioned space. Wasn't the O'Sheas crap table almost on the sidewalk, too?

Turns out the cashier didn't have any either. She even checked with her supervisor and told me they try to hold onto them for collectors if they notice one showing up at the cage. I left my business card and asked that they hold one for me. I checked back three days later, and sure enough they had one. I don't know whether they had really been holding it for me or not, but at least I got one for my collection.

The two images below are opposite sides of the same chip. It is a light blue RHC Paulson hat and cane design, with no edge inserts and with oversized center inlays on both sides, one primarily white and one primarily dark blue. Of course, there are parrots prominently displayed on both inlays – you just have to follow through on a theme! There are no hidden UV images on either side of this chip. I think a palm tree would have been nice. 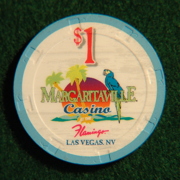 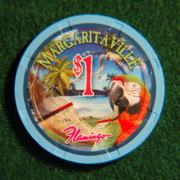 Here's my Margaritaville chip. I was surprised by how much more fun this casino was than the Flamingo-proper. At the Flamingo, the dealers always seem to be just "there," while the Margaritaville dealers were having fun and making the experience enjoyable for the players as well.
"So as the clock ticked and the day passed, opportunity met preparation, and luck happened." - Maurice Clarett
Doc

I guess I haven't played the main floor at Flamingo recently enough to recall what the dealers were like. I did think those in Margaritaville made the game fun (except for the fact that I was losing money).

So after the discussion yesterday, who has a guess at how the MOGH catalog counts the number of edge inserts in the chip that rdw4potus posted? Four? Eight? Some other number?


Edit: BTW, you really need to find where photobucket has hidden your second image of chips. I took a look at the MOGH image for the other side of that chip, and it includes a reference to another Jimmy Buffet song. Unless yours is different from the one in that catalog.
RSS Feed