A popular sportsbook named MyBookie which is currently starved of sporting events to accept bets on has recently decided to take wagers on the summer migration patterns of nine great white sharks. This online operator is using the data from Ocearch, a non-profit organization that has been tracking the movement of these great white sharks for years. 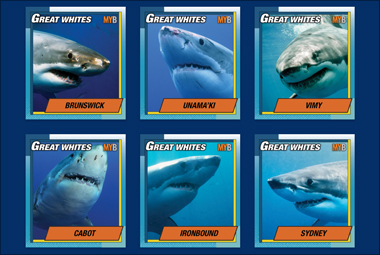 Some people are in favor of this venture as they believe it could bring some much needed awareness as well as money towards conservation efforts, but others are strongly opposing this idea for they think that this is just another way to unethically exploit these animals. Nonetheless, MyBookie and Ocearch are in the middle of negotiations at the moment, and only time will tell if betting on the migration patterns of great white sharks will become a thing of the future or not.

How the Gambling Process Would Work

“After being tagged with a tracker, sharks ping on OCEARCH when they come to the surface. Based on these pings, MyBookie will offer gamblers a variety of ways to place bets, such as how far a shark will travel between pings, whether a shark will enter a certain body of water, and what date a shark will ping next. For great whites that ping less frequently, wagers will be able to be placed on if it will resurface by a certain date and what country’s waters the shark will be in when it resurfaces. Statistics will be updated in real-time, allowing users to closely monitor their bets.”

“At first, I thought, we can’t be doing science and gambling at the same time,” Chris Fischer, the founder of Ocearch, proclaimed. “But this is totally out of the box. If you’re thoughtful, you ask, ‘How could this manifest?’”

“With no sports running, we’ve had to get more creative than usual,” says Strauss. “The shark is a good animal for this — it follows some of the same migratory patterns, so you can set odds on it. We kind of know where it’s going to go, but we don’t know when it’s going to get there.”

“There isn’t necessarily only one right way to care about sharks,” says Catherine Macdonald, a shark researcher at the University of Miami. “But in an era in which franchises like “Jaws” and “Sharknado” still predominate the public’s conception of great whites, gambling could end up reinforcing the association between sharks and entertainment, perhaps “cheapening” the animals’ significance.”

“In the hundreds of millions of years that they have traveled the oceans, sharks have become linchpins that hold entire marine ecosystems together. They have huge impacts,” Jasmin Graham, a marine biologist at Mote Marine Laboratory, informed. “They don’t get a lot of respect for all the work they do.”

“We’ve never dabbled in this space,” says Fischer. “Ocearch’s brand had been hijacked before, including one instance in which a foreign company put several of the nonprofit’s tagged sharks up for paid adoptions. Any contenders for Ocearch partnership require a fair bit of vetting.”

Even if Ocearch doesn’t end up working with MyBookie, the idea of optioning sharks for the gamblesphere is “interesting,” Mr. Fischer goes on to say. “It would have been much more interesting if I had known who they were before they did it.”

“Every Week Is Shark Week.”

“I have no illusions of grandeur that we are going to make millions of dollars off of this. It’s a fun thing and hopefully it catches on,” David Strauss of MyBookie stated.

“That always stuck in my mind, and the OCERACH site is perfectly set up to do this. All we had to do was come up with the odds. We were lucky that I knew about sharks and how they migrate,” says Strauss.

“I wanted to do it, but I also wanted to shine a negative light on fishing, so that is a negative side that is really not something we wanted,” Strauss explained.

“They Wanted You to Bet on Sharks. The Odds Were Not in Their Favor: Gambling on shark migration patterns could raise awareness, some experts say. But it could also fuel the animals’ reputation as mere entertainment.”, Katherine J. Wu, nytimes.com, June 23, 2020.

Oh come off it. You will always get do gooders who say Frozen Orange juice is just a way to force orange juice off the market for five years. Or some "save the bedbugs" and protect mosquiotes movements.
Remember those 'save the whales, collect a full set" teeshirts?
No one said rainwater futures would exploit water.
Bookies want action and that includes rain drops falling down a window pane. Remember the 'horse races" in the
POW movie Stalag 17

Even in the heyday of the Comstock lode, gambling was a major activity. Staking a prospector could make a man rich, though it was rare. Faro was big and Faro games were franchised. Road and bridge lotteries were common.
Footraces were not cancelled due to mud. bystanders made book on fights.

Integrity???
Consider the Yukon gold strike: all those ads for a wax that would pick up gold as someone rolled down a hill. Journalism integrity did not exist and people who made bad bets were not granted relief.

Perhaps its a lifestyle defect. We now punish a thug worse than a thief and it used to be the reverse. We now break up public fights but we used to make book on them. We now prosecute fraud but we used to merely laugh at the fate of a fool and his money. Bet on sharks? Why not? Bet on the Jets instead? Why not?

At least you know that the sharks won't be shaving points off their pings.

I've always found the archives at UNLV interesting but inadequate. Same with old movies that feature Vegas or Reno in passing. I recall one old murder movie that did not feature any games at all but did offer a glimpse of the ultra=low "last chance" minimum bets being advertised on a doorway. Perhaps some salesman kept a diary of his adventures with Jimmy Duggan as he traveled about America or there is some Life in West Possum Trot that could be consulted for its gambling data in relation to ordinary people and ordinary life rather than as an industry. Look how many lawyers and judges and housewives became distillers in Prohibition America.

Doorway clarification: The movie caught an existing, historically accurate painted doorway that referred to a "discount" game.
Often information is misinterpreted because of changes in language. Dead Soldiers rarely refers to corpses but more often to empty bottles of booze. Someone unfamiliar with the pseudonym Jimmy Duggan would not know craps was being discussed..Gambling and ordinary lives of early America is virtually unexplored territory.

i keep forgetting we have a naming expert available to us. What about the name "Ace High"?It used to be quite popular in the USA particularly in rural areas. It certainly indicates a gambling orientation. Anyone s till using it anywhere???????

I seem to be all alone here but i'll just think of Ibsen and go blundering onward. We no longer name kids Faith, Hope and Charity, so perhaps no longer naming kids "ace high" has less significance, but it surely should play some role.
We still have tv game shows, casino nights, names in a hat, etc..

FOOLTHAT I AM!!!! What about all those McDonald's Lottery contests? Millions of dollars ripped off and no one cared or even really noticed.

Look at the local newspapers. No one was alert to the "lily-white" winners despite the demographics of the Carolinas hardly being "lily White" in residents and being nowhere near that in FastFood customer demographics. No reporter or editor (or reader) had his eyes open and mind focused! We ignored the mechanics and results by focusing solely on the prizes. Millions of us! Is that how much gambling permeates our lives?