Last week the United States Supreme Court ruled that a sportsbetting ban within the country was to be overturned, allowing sports wagering to be decided on a state-by-state basis. 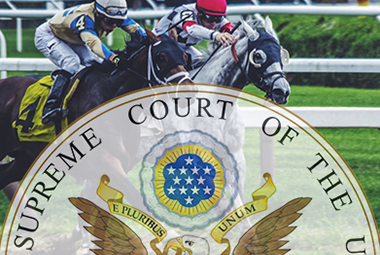 The Supreme Court ruled in a 7-2 decision to overturn a lower court ruling that forbade New Jersey from offering sportsbetting within their borders. The argument at hand was an anti-commandeering doctrine that the court had ruled on in the past. The doctrine stipulates that the federal government cannot force individual states to enforce federal laws. This doctrine is often tied to the tenth amendment, which reads:

“The powers not delegated to the United States by the Constitution, nor prohibited by it to the States, are reserved to the States respectively, or to the people.”

The issue at hand is that the federal government banned sportsbetting in all but a handful of states with the Professional and Amateur Sports Protection Act of 1992. New Jersey voters approved of allowing the activity within their borders years ago, but the Garden State was sued by professional sports leagues to prevent the wagering from taking place. Lower courts ruled that New Jersey’s law was in violation of PASPA, which takes precedent over the state legislation. Thus, sportsbetting remained illegal, and New Jersey appealed the case all the way to the Supreme Court.

In a complete victory for New Jersey, the court also ruled in a 6-3 margin to completely overturn PASPA, as they deemed the law to be unconstitutional. This majority opinion was written by Justice Samuel Alito, who opined:

"The PASPA provision at issue here-prohibiting state authorization of sports gambling-violates the anti-commandeering rule. That provision unequivocally dictates what a state legislature may and may not do.”

"The legalization of sports gambling requires an important policy choice, but the choice is not ours to make. Congress can regulate sports gambling directly, but if it elects not to do so, each State is free to act on its own. Our job is to interpret the law Congress has enacted and decide whether it is consistent with the Constitution. PASPA is not. PASPA "regulate[s] state governments' regulation" of their citizens, New York, 505 U. S., at 166. The Constitution gives Congress no such power. The judgment of the Third Circuit is reversed.”

The decision was a complete victory for New Jersey as well as all other states who want to legalize and regulate sports wagering. Barring congressional action, the activity will be decided by individual states, who can set their own rules for the betting. Still, interstate activity will be illegal, as the Wire Act of 1961 forbids using telecommunications equipment to facilitate sports wagers across state lines.

An industry poised to boom

Sportsbetting is set to become a major industry in the United States within the next few years. Several states have already introduced legislation to regulate the activity already, and more are jumping on the train. States that implement sportsbetting will bring in millions of dollars in taxes annually, and will also protect players from illegal bookies. It’s estimated that illegal betting in the United States amounts to between $80 billion and $380 billion annually.

It’s thought that a legal sportsbetting industry could create upwards of 100,000 jobs in the country, with IT, customer support, marketing, and other sectors seeing benefits of a boom. Spots like Monmouth Park in New Jersey are set to be among the first to open to sports wagers, and will be gearing up for an influx of customers. Moving forward, there could be more than 30 states legalizing the activity, proving to be lucrative for all parties involved.

Regardless of what happens, the decision by the Supreme Court is a game changer for the country, as it has opened the possibilities to create a new industry and protect players. We look forward to covering this emerging industry, and will keep readers up to date on the latest sportsbetting news as it comes about.