The Language of Video Poker 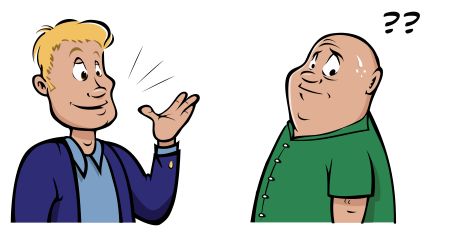 Obviously, my language would make no sense, and there's a pretty good chance that I would end up getting myself institutionalized if I used my language too often.  However, there can be a good time to invent your own language, and I suggest that one of the best times is when learning video poker strategy.

For an example of what I mean, for those of you familiar with the Wizard of Odds Video Poker Strategy Maker, you will know that the strategy maker spits out an analysis of the game in the Video Poker notations that are used by our very own, Wizard.  However, Video Poker Hall of Fame Member Bob Dancer has his own notations that he uses and often points out that those notations work for him, but some prefer his while other prefer Wizard's.

My suggestion is that a person can use one set of notations or another in learning how to play a particular Video Poker game, but what is often most effective (in my opinion) is developing one's own, "Video Poker language."  Even if you develop such a language and determine that you prefer the notations of Dancer, the Wizard or any other source of Video Poker notations that you might find, I believe it is still beneficial to think of Video Poker in your own way rather than carbon-copying the method of someone else right off the bat.

Furthermore, despite being (very slightly) advanced at math, I actually consider myself more of a verbal learner, so right now I am trying to perfect my Ugly Ducks (98.91%) Deuces Wild game that I can occasionally play positively, and I am coming up with my own Video Poker language with which to do that.

For many Video Poker players, it is possible that you played some form of traditional poker when you were a kid, perhaps even some form of poker in a casino prior to Video Poker.  I know that is certainly true in my case, and so I am able to use some terms I picked up from that experience to facilitate learning a new Video Poker game.

For example, if I don't have any Deuces, I know that I should always hold a 4-10 low open-ended straight draw, unless I have any four to a Flush (which inherently includes four to a straight flush, which should also always be held) with exception to any three to a Natural Royal which should be held if there is no single-gap straight Flush Draw included.  Additionally, any 5-9 low three to a Straight Flush with no gaps would also take precedence over the open-ended straight draw with four cards.

Another example is the fact that Dancer and Wizard often refer to penalty cards, which I often call penalty cards, but I call, "Blockers," for the purpose of this game...sometimes.  For instance, when deciding whether or not to hold four to an open-ended straight (W-5-6-7, for example) when I have a Wild Card, I refer to my Wild Card as a, "Blocker."  Even though it doesn't strictly block a hand like W-4-5-6, I call it a blocker because it is essentially a redundant card if I catch another Wild Card.  As you can see, I could catch another Deuce and the Wild Card (in the latter straight) is only serving as itself because it is acting as a two.  You only want to hold an open-ended straight draw (no possibility of a playable three or four to a Straight Flush) if the Deuce is NOT serving as itself.  The Deuce has to always be something else.

When is a Deuce not a Deuce?  Easy question, when you have one Deuce and no Straight Flush draw to hold, then a Deuce should never be a Deuce if you are going for a Straight!

Parenthetically speaking, there are some exceptions to those straight draws as pertains to the number of suited cards, but I think I have provided enough examples of my language to get my point across.

Do you understand everything in the above four paragraphs?  It doesn't matter.  I don't need you to.  That's my Video Poker language and I wouldn't attempt to teach it to anybody because it would likely be convoluted and confusing to anybody who is not me.  It makes perfect sense to me because I invented it, just like as if my parents had decided to teach me, in some bizarre joke, that a dog is actually called a peanut butter sandwich and vice-versa.

I definitely suggest going to school, but I don't want you to go to school and eat my dog while you pet my peanut butter sandwich.  I think it is a helpful thought experiment to decide what a dog, a peanut butter sandwich and anything else you come up with mean to you!  The point of Video Poker is to make what is mathematically the best play and anything that can help you do that is a positive.

If you can understand and memorize the notations of the Wizard, Bob Dancer or anyone else and recall them immediately causing you to play Optimal Video Poker, then more power to you and perhaps you don't need to create a language.  For someone like me, who tends to prefer expressing everything using full words, coming up with the idea to create my own language for Video Poker has proven invaluable and saves me from having to look down at a strategy sheet every ten or so hands.