I visited the Mob Museum on June 2nd, 2013. Officially it’s called the “National Museum of Organized Crime and Law Enforcement.” That’s quite a long name, so I’ll call it The Mob Museum as well. It is worth pointing out that law enforcement is an important part of the museum, well represented in several exhibits. 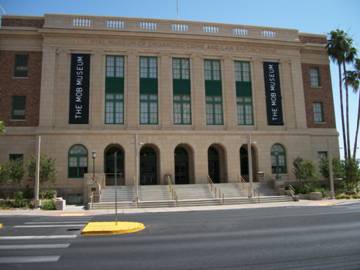 The Museum is located on Stewart and 3rd St. in Downtown Las Vegas. It’s just two short blocks away from the Fremont Street Experience. The building previously housed a courthouse, and it is on the National Register of Historical Places of the US Dept. of the Interior, as shown in a plaque by the entrance: 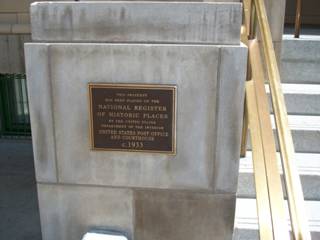 The museum’s purpose is to illustrate the history and activities of organized crime, and of the law enforcement agents who fight against it. While the subject is interesting and very relevant, it is hard to illustrate in a meaningful way. In this the museum acquits itself well.

The museum is divided into three parts. These are:

Each part occupies one floor of the museum. Oddly enough you begin on the third floor and move down from there. This is made perfectly clear when you buy your ticket, and also by signs and helpful attendants at the entrance.

A museum is supposed to illustrate a subject, not to delve deeply into it or tell its whole history. This the Mob Museum does, mostly with captioned photographs, captioned artifacts, charts and short videos scattered all over the place, and one movie in a small theater on the second floor.

Emphasis is made on Prohibition as a major contributor to the growth of organized crime in America. This is entirely correct. But it would be a mistake to think Prohibition made the mob possible. Organized crime is as old as humanity, after all. Pirates bedeviled the Mediterranean, and then the Atlantic and Pacific, for millennia. Bandits were the bane of overland caravans. Nor is the mob confined to the Mafia, the Italian gangsters. To name one, the Yakuza in Japan is a well-known organized crime group with a very long history.

What Prohibition did was provide the gangs of the time with two things: 1) a huge source of revenue and 2) the tolerance, if not the affection, of large segments of the public. In addition, bootlegging gave the mob time and money to develop a network all over the United States. This came in very handy afterwards.

One very interesting and very relevant exhibit is this one: 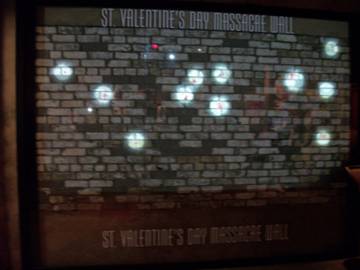 That’s the actual wall against which the Valentine’s Day Massacre occurred. The bricks were acquired by the Mob Museum and the wall was reconstructed. The spotlights highlight blood spatter on the wall.

The Massacre was part of a Prohibition-era fight between rival gangs. Seven members of one gang were murdered by rivals posing as police and carrying Thompson machine guns (the famous Tommy gun). By today’s standards it doesn’t sound so terrible, not when Mexican drug gangs kill many more people habitually. But in the early 20th Century it sparked a public outrage that finally got the government involved in the fight against organized crime.

When Prohibition ended, as the museum shows, the various gangs had established themselves firmly, divided territories among themselves all over the country, and had even begun to diversify into other illegal pursuits and rackets. Things like prostitution, narcotics, gambling, and more crucially involvement in unions, industries and even government.

The mob next began to move into Las Vegas, where gambling was legal. Now, a casino running honest bets, with a big enough house advantage, can easily make a lot of money. A criminal, though, seeks always a bigger score through illegal means. The gangsters running the casinos in Las Vegas (though it’s worth noting not all casinos were run or owned by gangsters) skimmed money from their own businesses, thereby reporting a lower income and evading taxes. This is beautifully illustrated here: 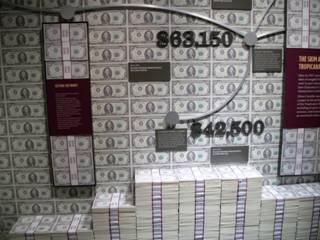 The bills are painted on.

Unfortunately the museum does not show much about other illegal activities, like robbery, which the mob involved itself with, nor how the gangsters were run out of Vegas, for the most part, by the 1970s when corporations moved in to take their place.

It does show some older photographs of one Oscar Goodman, a defense lawyer who specialized in defending mobsters, and who later became Mayor of Las Vegas. Lest you think the former Mayor resents this in any way, he was a special draw at the Museum just a few days before my visit for a meet and greet event.

There are a few exhibits about cheating, including a video presentation in a mock slot machine illustrating loaded dice. But only a short mention about how gangsters all too readily killed, beat up or tortured suspected cheaters, including casino employees suspected of aiding or conspiring with cheats.

A section on the second floor warns of graphic images. I won’t post them here, but I’ll give a general description. In short, we get to see several dead gangsters. These photos, along with a chart detailing notable mob killings and attempted killings, rip off the mask of glamour often associated with the mob. We are reminded these are violent criminals, who do not hesitate to employ violent means to settle disputes, including torture and murder.

On the second floor a short movie is shown on three screens inside a theater modeled like a courthouse. The theme is the Kefauver Hearings, run by the Senate Special Committee to Investigate Crime in Interstate Commerce, headed by Senator Estes Kefauver, in the early 50s. There is some video testimony of actual mobsters included.

The upshot of these hearings was the admission that a national organized crime syndicate did in fact exist in the US. This admission was made by J. Edgar Hoover, then director of the FBI. He also admitted little had been done about it since then.

Don’t miss the short movie. It’s perhaps the most interesting exhibit of all, if not the most dramatic.

Finally you reach the first floor and the section on law enforcement.

About the first thing you’ll see is this: 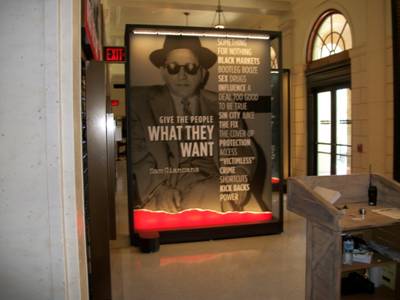 The quote by Sam Giancana is only “Give the people what they want.” This succinctly explains the mob’s existence. Although as you can see from the added list, even legalizing drugs, prostitution and other practices that do no harm to the rights of other people, would not be enough to eradicate the mob.

Exhibits in this floor explain how difficult it is to prove in court many of the crimes committed by the mob. These exhibits include wiretapping equipment, other forms of audio surveillance, lists of common slang words used by gangsters (to hide their true meaning; a primitive and simple kind of code), and even words used by law enforcement agents (for the same reason). There are recounts of undercover agents as well.

But in truth prosecuting the mob isn’t a very exciting subject. There is a small pair of cubicles which provide an interactive demonstration about how agents use their weapons. You can try your hand at seeing whether you can identify the right target, and whether you can then hit it. It’s not as simple as it sounds.

We also get to see a few details of organized crime in other countries. These exhibits include some very disturbing images. You can guess how they chose to illustrate the Yakuza’s practice of punishing sins against the organization by severing a finger. We also see what lines of “business” these organizations are involved with. Things like pirated movies, drugs, counterfeit designer goods, etc.

He most disturbing images in this floor, at least to me, do not involve any graphic scenes at all. See for yourself: 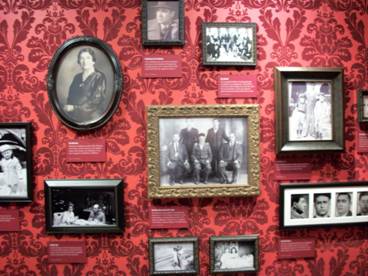 If you see these family photographs, you’d find it hard to believe these same people regularly engage in murder, violence and crime. That’s what makes these so disturbing: the monsters look like people after all.

A small theater set up like an elegant showroom, shows a few snippets of mob movies, and some exposition on America’s fascination with these figures. This goes back to the 1930s and Edward G. Robinson (a long time, see?) we learn that real mobsters sometimes act as consultants in these films, and in one at least (and I’m not saying which) an actual gangster makes an appearance.

I’ve never shared in this fascination with gangsters. In fact, I was concerned the Mob Museum would be yet more glamorization of the mob. If you share this concern, you can rest easy. It is as much as about prosecuting the mob as about the mob itself.

You exit via the museum gift shop (this is a common practice in museums and exhibits). I would scarcely mention it, except they sell serious books about the subject. I recommend reading “The Battle for Las Vegas” by Dennis N. Griffin. It focuses on the one term of Sheriff John McCarthy and his actions against the mob in Las Vegas. But it also tells, in succinct fashion, the history of how the mob got established in Vegas and what it did there. It’s available from Huntington Press in Las Vegas (they’ve also published a title which should be familiar to readers of this website: Gambling 102 , by Michael Shackleford).

The mob Museum is interesting and instructive; it tackles a difficult subject in a way that’s honest and straightforward. It is well worth visiting.