I visited the Atomic Testing Museum on May of 2012. 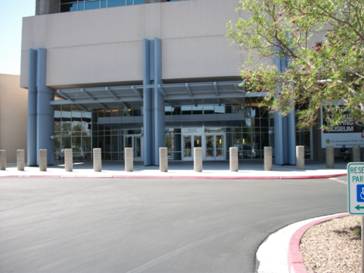 My opinion of the museum is essentially: interesting, but not compelling. It is worth visiting once. The museum is given over to the history of atomic testing in Nevada, with some mention of other places. Atomic weapons, all kinds of them, were the major factor in the Cold War. That is, their very existence and deployment largely determined the course of the Cold War. If you look at the most critical points in said war’s history, you’ll find the two most salient are the Cuban missile crisis, which involved the deployment of short range nuclear missiles in Cuba, and Reagan’s “Star Wars” (actually called the Strategic Defense Initiative) program to build a defense against intercontinental ballistic missiles (ICBMs).

This s interesting, yes? Indeed, very much so. One can discuss such things for hours, and countless books have been written on the topic. But that is not what the museum is about. What it is about, as noted above, is the history of atomic testing in Nevada. This it accomplishes fully and well, with some additional necessary information.

To begin with, the first thing you find is a couple of small booths showing a looped tape of Walt Disney’s film on nuclear energy. I bet you weren’t expecting to find the name “Walt Disney” in this context. It is a classic short film, which remains one of the best on the subject as regards presentation, clarity and entertainment. I’ve seen it a great many times, on TV and twice in school, but I still sat through it again on both my visits. If you look closely, you can see they used mirrors on the demonstration of a chain reaction using mouse traps and ping-pong balls (it makes perfect sense when you see it).

Next you come across the most interesting exhibit in the museum: the Timeline. It runs along the walls for about one third or so of the museum. It shows first what was going on concerning atomic testing, then what was happening in history (or in the news), and lastly it shows the state of American popular culture.

The Timeline is fascinating for those with any interest in history. But beyond that it helps put in a very wide context both the history of atomic testing and many of the other exhibits in the museum. I recommend taking your time when visiting. Make sure you see both the Timeline and the exhibits.

I will not attempt to list all the artifacts exhibited. For one thing there are too many. For another, I did not take notes on all of them. But I will list a few which shouldn’t be missed or that deserve special attention. 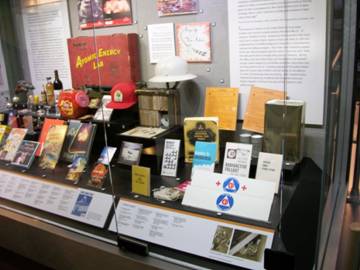 Here you can see everything from covers of popular magazines, to atomic-themed products, to booklets on what to do in the event of a nuclear attack, to equipment for use in such an event. Some of these things are fascinating as seen from a modern perspective. One can deduce easily, for example, that the people of that time, late 40s to mid-50s, did not regard a nuclear war as a cataclysmic event which would, at least, destroy human civilization.

This is not the time or place to debate this view versus our modern view, the latter holds nuclear war as equal with the end of the world. But I do want to say there were reasons for such a belief at the time. For example, ICBMs were few and unreliable, and there weren’t as many nuclear bombs in existence at the time.

Make sure, though, to read the placards on that exhibit. Some are informative, others are very funny.

Next we have this: 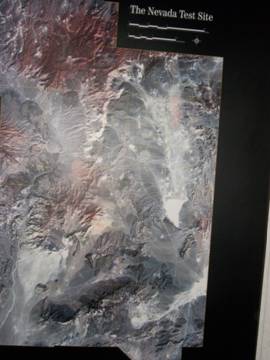 This is just a map drawn over aerial photos of a portion of Nevada, dividing the region into areas. Each area is numbered. You can guess what follows, and you’d be right. One such area, though it may not be in the map, is number 51. Yes, that’s the origin of the infamous “Area 51.” Of course this is far from being transcendent, but it is interesting. Plus it shows there’s nothing sinister or even secret about the name. 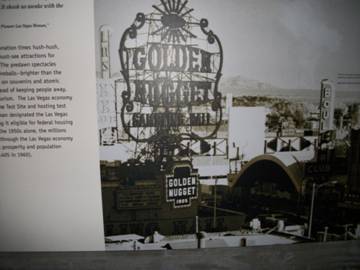 It’s not easy to see, but that white column next to the vertical sign reading “B O U L…” is a mushroom cloud. That’s how near to Las Vegas atomic bombs were tested. The shot is from Downtown Vegas.

This did not deter tourists. It attracted them. People flocked to see atomic bombs going off. Now, even at that time the dangers of radiation and fallout were well known. So one has to conclude the authorities at the time deemed the risk to the people in Las Vegas was minimal. Yet it would be interesting, to say the least, to find out what’s in the medical records of people who resided there at the time.

It bears mentioning that military and scientific personnel involved in the tests would have been standing a lot closer, and would be involved in more tests. Their medical records would also be interesting to see. 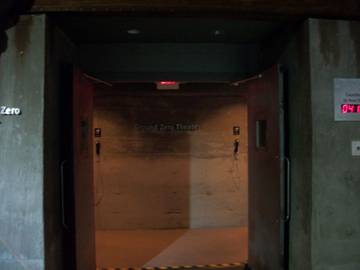 This is the Ground Zero Theater. Here you can watch a short movie, which begins with a black and white sequence of a nuke going off. It is impressive, especially if you seat close to the screen, but not overwhelming. This is where realism, valuable for education, should have been trumped by dramatic effect, valuable as entertainment. How so? Well, how about watching a nuke go off just yards away rather than miles away? This is impossible to do in real life, but easily accomplished in a modern high end computer.

There is some dramatic effect, however, as fans blow air in sync with the detonation. Also you get the eeriness of watching the explosion seconds before you hear it, though that’s not as unusual (it happens in every thunderstorm).

The tail end of the presentation has people involved in making and testing atomic bombs talking about the significance of their work. They mention keeping the peace a great deal, as I noted at the start in my remarks concerning the course of the Cold War.

Much of the rest of the museum is given over to the technical aspects of testing nuclear weapons. This is very interesting, but the subject is too dry for a review. If you have an engineering or scientific streak in you, you’ll love it. If not, it may prove a bit dry in person as well. I have to admit I didn’t find it engaging myself. Partly this is because I already knew the reasons why these weapons are tested, and partly it’s because the technical details can be too technical.

In other words, what’s most interesting about atomic bombs is how they go off, and what happens in and around the target afterwards; see how many photos of Hiroshima after the bomb was dropped you can find, and how many articles on the building of atomic weapons (at that one of the best is contained in Tom Clancy’s novel “The Sum of All Fears.”) How engineers determine the actual yield and radiation is less impressive.

This is a bit like how much scientific research is carried out, too. While it’s fascinating to read about, say, the Higgs Boson, the graph that shows its discovery is just a graph most people won’t understand even after it’s explained to them. Still, wouldn’t you want to see the super Collider at CERN?

Near the end of the exhibits this was added: 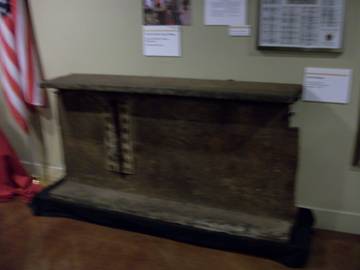 This is a piece of an I-beam salvaged from the remains of the world trade Center in 2001.

Both memorials and displays of relics of the 9/11 attacks are common. What makes this one special is that, as you can see, it is not held behind glass. It sits there unguarded, with only a small sign warning of sharp edges. In other words, you can lay your hands on this piece of the WTC. On both my visits I found this exhibit a deeply moving experience.

It is completely appropriate to have it in the museum, given the museum’s theme and all. It also serves as reminder that the most fearsome weapons Man has ever devised are, in the end, only of limited use as a deterrent against some enemies.

Once you’re finished with the atomic testing part, the museum hosts a travelling or special exhibit. In 2010 it was a showing of battlefield art. These are pieces made with bullets, cartridges, shell casings and even shrapnel.

Ashtrays made from shell casings are rather common. The pieces exhibited at the time were much more elaborate and certainly not made in an actual battlefield.

I won’t describe it in detail, as these itinerant exhibits change every several months. But I’ll mention it was a serious look at UFO sightings, what is known about extra-solar planets, and what work is being done concerning the possibilities of life elsewhere. The last includes SETI, complete with a picture of the famous “WOW!” signal (look it up).

So, in conclusion, the Atomic Testing Museum is interesting enough for one visit. I wouldn’t recommend bringing small children along, as they’d likely find it boring. Older children, say above 13 or so, might enjoy it.