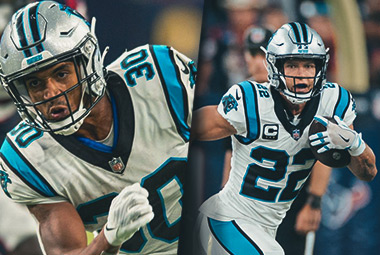 The Carolina Panthers defeated the Houston Texans in that match – up with a final score of 24 to 9, and up to this point the Carolina Panthers have gotten off to a great start with an overall record of 3 and 1 to the beginning of the 2021 – 2022 season of the National Football League.

McCaffrey was forced to leave that Thursday Night Football game vs. the Houston Texans early in the second quarter after he pulled up limping following a 2 – yard rushing attempt due to a strained hamstring injury. On Friday, September 24th, 2021 the Carolina Panthers and their head coach Matt Rhule expressed to the sports media outlets that Christian would have to miss at least a few weeks of football activities while he recovered from his most recent injury.

Now on Tuesday, October 5th, 2021 McCaffrey may be ready to play this weekend against the Philadelphia Eagles. Christian is currently listed as hopeful to play this Sunday, October 10th, 2021 when the 3 and 1 Carolina Panthers host the 1 and 3 Philadelphia Eagles at 12:00 p. m. CST from Bank of America Stadium located in Charlotte, North Carolina.

Currently there are only two players in the entire National Football League that produce close to 40 % of their team’s offensive output while playing, and they are Derrick Henry of the Tennessee Titans and Christian McCaffrey of the Carolina Panthers. Look for the Carolina Panthers to quickly remove Christian from the game if there seems to be any signs of tightness or any other setbacks in McCaffrey’s return from this hamstring strain.

How the Carolina Panthers Replaced Christian McCaffrey at Running Back

The Carolina Panthers also had previously worked out the former Cleveland Browns and Houston Texans free agent running back, Duke Johnson, following the time when McCaffrey had to leave the ball game vs. the Houston Texans a couple of weeks ago. Johnson never ended up signing with the Panthers, and I believe he is still out on the NFL’s free agent market – place. Hopefully for both the Carolina Panthers as well as Christian McCaffrey he can play this Sunday against the struggling Philadelphia Eagles and not aggravate his injured and recovering leg muscle, but only time will tell.

"They are still doing a bunch of diagnostic testing, so I can't tell you if that is one, two, three or four weeks," the Carolina Panthers head coach Matt Rhule explained when the injury to Christian McCaffrey first happened multiple weeks ago. He goes on to say, "It breaks my heart seeing these guys work so hard and get hurt. We're a better football team (this year). I'm going to get to Wednesday and see. In talking to Christian -- he's going to come out to practice and see exactly where he is football - wise."

"Obviously, we want him back," the Carolina Panthers starting quarterback Sam Darnold expressed. "But I want him to take his time right now and make sure he's good for the end of the season."