In the first two editions of this three-part series on Home Poker games, we took a look at what is perhaps the most commonly played Home Poker game, Five Card Draw, and we looked at the Home Game of Texas Hold 'Em in the second.

However, one of the most potentially lucrative situations that can present itself in Home Poker does not come in the form of one beatable game, but rather in the form of many, with Dealer's Choice.

The single greatest advantage that a player can garner while dealing is the ability to select a game that most benefits that player.  My favorite game to select is a variation of, "Seven Card No Peek," which I will explain, but first you might want to familiarize yourself with standard 7CnP:

My variation is a little different: First of all, a card is turned over AFTER the seven card hands are dealt out face down, and the first player has to beat that card with either a higher card or a ranking hand.  The first four cards in a player's hand require a bet of one unit each to see while the final three cards each require a bet of two units per card.  After the player has successfully beaten the turned card, action then moves on to the next player who has the option of paying for cards to attempt to beat the hand of the previous player, or the player may fold.  This continues around the table until it gets back to the dealer. 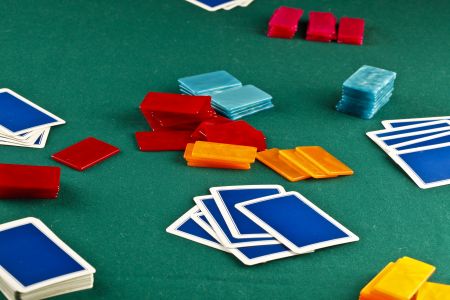 The tendency of most players is to play this game WAY too aggressively by way of being hesitant to fold until they absolutely have no chance of having the best hand.  For example, I've seen players go up against Two Pair (Kings or Aces High, even) with a pair of Deuces hoping that they will catch Trips despite the fact that the player with the Two Pair has two unseen cards remaining and no other player has yet matched either of the cards composing the Two Pair of that player.

Think about that for a second: Imagine that a total of thirty cards are showing and the player with two pair has two remaining unseen cards...That means that even if the first player in this example were to catch a Deuce in those last two cards, there is an approximately 18% chance that the second player will turn over another of the paired cards for a superior Full House anyway.  Some players will even go for this play with a deuce showing in one of the hands of the other players.

This is a pure probability and Pot Odds based game as there is no bluffing and no strategy other than playing the math, which makes it a terrific game for me.  The best part is that the other players sometimes absolutely love it and will themselves occasionally call for the game!

I would love to go over more examples and strategy points of this variation of Seven Card Stud, I could write a book about it, in fact, but I doubt if anybody would be inclined to read it.  One quick tip that I can concisely give is that it pays to be willing to fold!

In fact, most of the advantage of this game (as the dealer, playing last) is that you are going to be able to see when players make strong hands early and then mentally calculate the approximate pot odds that you are getting by playing, in many cases, you won't play at all.  For example, if there are six players at the table and it comes back to me in a situation where one player has ended up with Trip Tens, I know you are only about 15% to get Trip ANYTHING or better, so there is a very good chance that the Pot Odds are not even going to justify venturing a minimum of three units (and that's if I get running cards) to try to beat the Trips.  I'm going to fold immediately, and it will have cost me nothing.

While folding may not sound like the most exciting thing in the world to do, remember that the Pot grows quickly as the turn makes its way back around to the dealer, so when the dealer does stick around against a bunch of marginal hands, it is in a monster pot!

Just to give an example of how a hand might go, I've gone to Random.org and asked it to draw 43 cards from a standard deck (Six players, one turned card)

Here are the results:

As the dealer, I would fold at this point because I only have one out of Four Cards that ranks higher than the Nines which are the high pair at this point, further, that one card is already matched by the first player who is showing a Queen.  My six is matched by two other players, as well.

I'm going to let Random.org do a few more hands until I get one that could be favorable to the dealer, so we can see what I would do in that situation:

In this situation, we see that the fifth player has turned over a Pair of Fours immediately, however I know that the probability of getting a Pair (or better) in seven cards is over 80%.  There have also been eleven units bet so far, so there is no question I want to see a few cards here:

First Player: J, 10, 8, 6, 5, FOLD (Just about all players would fold in this situation, the player has risked six units and does not have a pair and only two over cards to the best showing pair.  There are also two other Jacks on the board)

---Some argument can be made that the second player would have folded before either of the two unit bets, but then, the Ace is an unmatched overcard...I would have folded in this situation after seeing the Queen, (Both of my overcards have appeared TWICE in other hands!) but I think most players would have played it.  You'll notice that all the Queens are now out.

--- It is difficult to imagine ANYONE continuing to play in the situation of the third player if the second player plays on.  The player has a double-matched Jack, a single-matched Nine and NO OVERCARDS to the Queen.

---With no Pairs, no overcards and a double-matched four, there is really no way that this player can continue to play.

---It is tough for this player to continue to play, Trips don't look good because the four is matched by player four.  Two of the other threes are out and every other Jack is showing.  The sevens are only matched once, but that still only gives this player four cards to improve against a higher pair with one card left AND MORE cards to improve the Pair of Queens!  In fact, Player Two has a better chance of improving with ONE card than does player five with the remaining two!

---The Dealer has a tough decision to make here.  We know that all of the Queens are out, so there is no possibility for improvement there.  Furthermore, there is only one free Nine and one free Seven left, and player two can still improve with that last card.  However, if the Dealer folds, there is a 100% chance that the dealer loses four units...let's calculate the dealer's rough chances of improbing just based on the seven and nine that remain:

We know the results of 29 cards, so that leaves 23 unknown cards.  The player has a 2/23 chance of hitting either a seven or nine with any remaining card...

That basically means that there is roughly a 90% chance that the next card will not improve the Dealer's hand, which equates to a more than 70% chance that the player will not catch a seven or nine with any of the three cards remaining.  The Dealer probably cannot be seen using a pen and paper to determine how many unmatched cards are left that will otherwise give the dealer two pair (with runners) but this essentially means that the dealer will lose six additional units in an effort to win 32 units (including the four the Dealer already has in there):

Of course, we also have to look at the probability that the Second Player can improve with that last card assuming the Dealer hits something.  Based upon the known cards, the second player can hit either an Ace or a King to improve, rendering a 6/23 chance of improvement, close to 25%.

Again, these are rough approximations because the other players aren't going to take too kindly to you pulling out a pen and paper and doing complex algebraic equations, but what we will assume is that if the second player improves, the Dealer will almost definitely lose.  The decision needs to be made now, however, because the more money the Dealer puts in (and loses by folding) the more continuing to play is justified.

The Pot Odds still make continuing to play (rather than folding the four units) a positive decision to the tune of roughly three units.  That means that the Dealer is still expected to lose one unit overall (3 units - 4 units = -1 Unit) but that is better than the guaranteed loss of four units.

Unfortunately, the Dealer finished this hand with 9Q972KA and lost to the Pair of Queens, but we did get to see how the decision-making process works.

The takeaway from this Article when it comes to Dealer's Choice home games is that an astute player will find a reasonably obscure game (or invent one) and make sure to be very well-versed in that game.  The result will be an advantage every time that game is dealt simply because of having more knowledge than the other players.

Another thing that a player can do is to call a casino game such as Three-Card Poker, Pai-Gow Poker or Blackjack and make sure that the rules yield an even bigger edge to the dealer than the casino would even otherwise get!  It is important in doing this to make sure the other players understand the rules of the game you are calling so that there are no disputes.

Hopefully, this series of Articles will prove beneficial if you find yourself in a Home Game at any point in the future, particularly if that game involves, "Dealer's Choice."  Not only will you be able to call the game that best suits you, but other players will likely be calling for Texas Hold 'Em or other variations of Five Card Draw, so you'll be able to implement what was discussed in the two previous Articles, as well.