In the second Article of this three-part series, we're going to take a look at another common game for, 'Home Poker,' games which is Texas Hold 'Em.  While Texas Hold 'Em remains a popular staple in the poker rooms of many casinos across the country, it is still a very common game to see in home games and has been since the poker boom of the early 2000's.  As with the previous Article, this Article is going to be written under the assumption that the reader has, at least, a rudimentary understanding of the basic game, and if not, there are any number of online resources that can help you understand it.

The one aspect of Texas Hold 'Em that I would highly emphasize, even for those looking to just jump into a home game, is that the learning curve is much steeper than it is for Traditional Five Card Draw.  The math and the strategy of the game is much more difficult for a player to understand and new players need to be cautious of doing such things as over-valuing hands and chasing hands.  Even in a home game, particularly a no-limit game, buy-ins can be wiped out very quickly by a player who makes just a few mistakes.

With that said, though, and assuming that the reader has at least a rudimentary understanding of this great game that poker great Mike Sexton describes as taking, "Five minutes to learn, but a lifetime to master," here are some tips for home games of Texas Hold 'Em.

Be the Most Aggressive Player, not the Most Popular

As with any home poker game, one of the main reasons that people play Texas Hold 'Em in such an informal environment as opposed to the casino is because of the casual atmosphere.  In many of these games, players are looking to simply make their buy-ins last until, 'The end of the night,' whenever that may be.  For an astute player, this tendency among home game players makes having the moxie (and ability) to steal antes and small pots paramount as players will often tend to play more conservatively and underplay their hands. 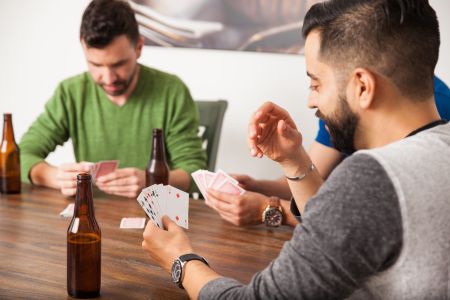 It is important to point out that a tendency to play more aggressively will easily prevent you from being the most popular player at the table, and furthermore, you're going to run into a lot of hands that have been underplayed that you have pursued too aggressively.  These sorts of games are going to have a lot more, 'Calling station,' type players than your average casino game, especially in the later rounds, so you can exploit that tendency by betting aggressively on strong hands knowing that it won't take very much to get the other player to call you.

The previous paragraph applies mainly to post-flop betting rounds, when it comes to the pre-flop betting round, you're going to be able to observe the sort of hands that people are willing to play pre-flop and use that information to determine if they have a tendency to fold what would otherwise be playable hands.  This information is most useful if you have position on another player, and most especially, when there are fewer players at the table.  A small pre-flop raise in some games can win some blinds and antes nearly by default as many players won't even see a flop without a hand that is in the top 80%, or so, of starting hands.  In other words, you can often get such players to fold their blinds a good portion of the time and wonder, "How do you always have something?"

It is very important to keep the raise size limited in these situations because, when such players do call, you're often going to find yourself having to, 'Catch up,' to an unexpected powerhouse, or perhaps high suited connectors.  It is true that you can and will outdraw these hands, on occasion, and certainly you're going to get your own fair share of legitimately strong starting hands, but you have to make sure that your bet sizing is such that the blinds and antes you pick up justify the occasional lumps you're going to take when you do go up against a strong hand.  It may sound like an oxymoron, but you need to be tentatively aggressive.

Understand the Tendencies of the Other Players

Many professional poker players have cited their unpredictability as a huge part of their success, while others such as Daniel Negreanu have a seemingly God-Like ability to read their opponent's hands.  In the case of a home poker game, you're actually going to be able have a greater chance of achieving both.

One of the keys to a home poker game is the fact that you will tend to play the same people week-in and week-out, and again, due to the casual environment, many of these home players will have a tendency to be complacent and play their cards in a nearly robotic manner.  That is why it is very important to make mental notes during the course of play in a home game, then go home and turn those mental notes into actual written notes that you can use to study the tendency of the players at the game prior to each session.  Much with Five Card Draw, the simple act of being an observant player is going to be essential to achieving this goal because you want to get a gauge of what cards people are willing to go into a pot with, which can be determined by seeing what they have at showdown.  If you have a player, for instance, who doesn't mind calling a pre-flop raise and going in with absolute garbage, (consider a player who starts with two low and off-suit cards, such as a 7-5, and occasionally shows down a winning straight) then you know that you can generally bet even more aggressively pre-flop and post flop against that player because they'll call with virtually anything!

Another indicator you want to look for in a home game is bluffing, and this is going to be robotic (rather than skillful) bluffing.  One of the most common bluff tendencies that I have seen in home games is that of the, 'Missed draw,' when a player plays through until the River, but is disappointed by missing on a hand that appeared to have huge potential, and takes a stab at the pot, anyway.  Unfortunately, the sort of betting pattern that this player is going to exhibit is going to be very similar to the way that player bets when he/she actually makes a draw and achieves a powerful hand, so you will most definitely have to look for other cues as to when the player is bluffing.

This will not be as difficult to do as it would in live casino games due to the casual atmosphere of the home game.  The players of a home game are going to have a tendency to have their guards down as they are busy enjoying the conversation, the drinking or paying more attention to a particular sporting event on TV than they are to playing the game.  Some of the tells from these players can be extremely blatant, and some of the tells aren't really tells about their hands at all, but rather tells about how little attention they are paying.  I remember one particular occasion where a player had checked his cards twice pre-flop, then after the flop, and then once after the turn and again after the turn after turning back to the TV for a second.  Believing the player might have a Flush Draw and had to keep looking at his hand, (and after I had raised pre-flop, gotten called and raised after the flop and gotten called) I said, "Three clubs on the board, King-High, if that helps you out."  The player responded, "Oh, sorry, I don't even have a Flush draw.  I'm watching the game, sorry about that, I keep forgetting what my cards are!"

Obviously, I accepted the apology, but internally I was thinking, "No need to apologize, I love knowing when I am essentially just going up against a random hand!"  That knowledge, of course, gave me the ability to play that particular player strictly according to the math, essentially just raising him (and getting called) anytime I had a better than average hand.

Also, for the home game that includes some friendly imbibing, it is important to understand the tendencies of both of every player at that table: the sober version and the drunk version.  For the most part, intoxicated players have a tendency to bet more aggressively with weaker hands than the sober version otherwise would, to overvalue hands, and to chase draws.  These tendencies, if existent, are important to keep in mind as the night wears on.  A drunk player is almost invariably easier to beat than a sober one.

With respect to being unpredictable, the simple act of playing the tendencies of the other players (which will cause you to play all the players differently and play differently out of different positions) lends you the appearance of unpredictability, even if you're not being particularly unpredictable.  For instance, I might know going in that I am going to do x against player a, y against player b or z if player c stays in, but since they only pay attention to the action when they are involved with the hand, they will see me showing down hands against one player that I wouldn't even still be in the hand with if I were against another player. Because these players are only paying attention to showdowns, and I'm showing down a wide range of hands, I have been lent an image of unpredictability while playing a highly automated game depending on who is in the hand with me.

As with any other home poker game, if you are perceived as the guy who, 'Takes the game too seriously,' and who is, 'Always winning,' you might find yourself being excluded from the game eventually.  Hopefully, you'll find another one.  The best piece of advice I can give for Texas Hold 'Em, or any other home poker game really, is that if you want to be the most popular guy, just kick back and have some beers and play like everyone else is playing.  On the other hand, if you want to win some money, unless you happen to be going up against an unusually strong home game, it won't be too terribly difficult...certainly much easier than in a casino.

For the last Article of this three-part series, we're going to look at the ever-popular, 'Dealer's Choice,' home poker.  Dealer's Choice offers perhaps the best money-making opportunities of all if you are able to identify players that don't have a great concept of the probabilities in poker and you pick a mathematically advanced game.