Red Parrot: Long story short: My girlfriend accidentally threw away a box with $10k of my blackjack money. We live in an apartment complex and threw the trash yesterday into the dumpster which has a giant compactor similar to this.

By the time we got to it, the compactor had been run. There's no way to physically access the trash that had been compacted. The apartment manager said we can't access the compactor area since it would be a liability for them. The trash hasn’t yet been picked up by the city’s weekly pickup. Is there anything we can do to get this money back? Any help is much appreciated. 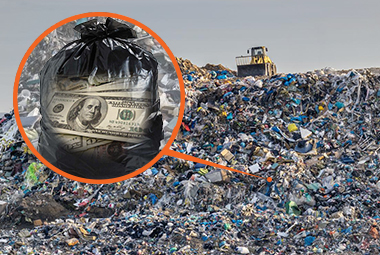 Rockky176: Call the city and see what they could do to help you. They have likely heard it all before. If not, consider getting a lawyer or a court order to stop them from destroying the trash.

LV Bear: I like Rockky's suggestion. Calling the city seems like the best option. Accept whatever they tell you as the end of it. It probably won't be worth paying a lawyer; even if successful, the fees will likely eat up most of the money, and you might not even recover the money anyway. Then what? You've paid a lawyer plus lost the 10k.

Think of the logistics -- who is going to go through the compacted pile of garbage? Surely not you; it will probably need to be a city or landfill employee in proper protective gear. The city, landfill operator, and maybe others will rightfully want you to reimburse them for the expense incurred in the search. Sad as it sounds if the city won't help, chalk it up to experience and definitely buy a safe.

I once forgot I had $5000 of "emergency cash" hidden in the trunk of a car that I was disposing of. My son remembered it and was able to retrieve it just before the car would have been gone forever.

Hit a7: Years ago, when I was still going to school and living at home (in a condo complex), I was expecting a package with some very expensive hardware for a project I was working on. The UPS guy left it on the porch, I got it, opened it and confirmed it was correct, and left it inside my door with the wrapping paper making it look kinda messy but still inside the box. I left for the day; when I came back that night I found out it was trash day. My dad had tossed the box, thinking it was trash. By that time, the trash had been tossed, compacted and taken away. Contacted the trash company but to no avail. I was a super broke college student and replacing that order was out of my reach. I was truly devastated. Not to be a pessimist, but getting the apartment manager, or trash operators, etc. to give you a break is very difficult. They are on a schedule and it seems they hear stuff like this all the time. So sorry, wishing you the best.

Tuco: Once, I dropped a wad on the casino floor. Didn't discover it for ~20 min. By then, it was way too late. Went through the whole surveillance circus. First, they were telling me they didn't see anything, but after I called the sheriff, they suddenly found the video evidence. The looked around, picked it up, went to the other side of the casino, and started feeding it into slots. Good customer! When casino security confronted him, he denied it and left. The sheriff told me that if they'd got to him first, they would have searched him and confiscated the cash (lesson there). However, in order to assuredly get the money back, I'd need to prove that it was mine, i.e. unique property (another lesson). Now, sometimes I'll snap a photo of my spread-out wad to capture serial numbers.

Dunbar: You could indemnify the apartment complex.

"The apartment manager said we can't access the compactor area since it would be a liability for them." 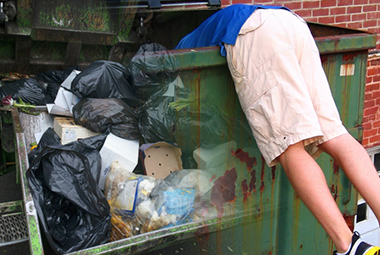 My law professor wife says why not indemnify the complex? Bring a document saying you will not hold them liable for any issue regarding searching the compactor. If you can get to a lawyer quickly, he/she would write it up for a couple hundred dollars. You could also google it and write it up yourself using a template. I think it's possibly more impressive/threatening if you have a lawyer do it.

If the apartment manager still refuses access, threaten to sue him as well as the apartment complex. They have possession of your property and are refusing to return it. I think it's analogous to your dropping your wallet on a casino floor and confronting the person who picked it up the next day. Even though it was your negligence that brought about his possession, he has to give it back to you.

If they don't cave at the legal threat, consider taking them to Small Claims Court, or whatever the equivalent is in your state. Most states, including Nevada, have a route to settle small claims without getting a lawyer. In Nevada, the limit is, conveniently enough for you, $10,000. If you show in that court that you offered to indemnify them, I don't know how the apartment complex could defend their decisions.

Red Parrot: They said they'll let me go through the trash. Not looking forward to going through all that trash though... Thanks for all the suggestions. Unfortunately, I wasn't able to find it. I'll chalk this up as an expensive lesson.

As they sometimes say in sports, "that can't happen!". Bottom of the 9th, tying run on 3rd base, winning run on 2nd, meaningless run on first base. Runner on first base gets picked off! "That can't happen!"
Applied here,
*money should never be in some 'box' [at least it wasn't a trash bag, that's the worst]
*in other words, not in something that could possibly look like trash
*seriously consider having her head examined. Who throws away a box without looking at what's in it?

Sorry to be so mercilessly critical but "that can't happen" needs to be a mantra in your life.

how well do you know this woman? What woman, especially, doesn't look in a box her boyfriend has been saving and not showing to her? Just saying.

Yes odg is on the case of the lying whore.