The 145th running of the Kentucky Derby will take place on Saturday, May 4th at Churchill Downs in Louisville, Kentucky. The 20 horses participating in the race are by rule all three-year-old thoroughbreds. 19 of the 20 race horses have all qualified for the event based on points they have earned in the 2019 Road to the Kentucky Derby, which is a series of 35 races. 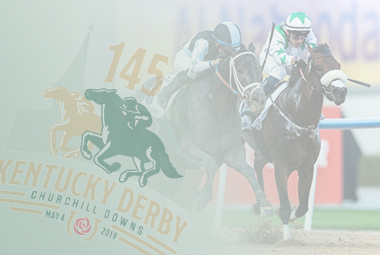 The seven major preps for the Kentucky Derby are the Louisiana Derby, UAE Derby, Florida Derby, Wood Memorial, Blue Grass Stakes, Santa Anita Derby and Arkansas Derby. The winner of each of the major preps earns 100 points, which guarantees the horse a spot in the Derby as long as the owner pays the required nomination and entry fees.

Horses can also qualify via the European Road and Japan Road. In 2019, none of the offers for the European Road were accepted and the top three finishers in the Japan Road declined their invitation as they had not been nominated. The connections of the fourth place finisher on the Japan Road, Master Fencer, decided to accept the offer, marking the first time that a Japanese-bred horse will enter the Derby.

Not only a big event in the USA, it also represents a long history all over the world.

This grey colt is owned by Juddmonte Farms Inc. Tacitus is trained by William I. Mott and will start the Kentucky Derby from the #8 post position. Jose Ortiz is the jockey that will ride this impressive horse on Saturday. Tacitus earned 150 points in the 2019 Road to the Kentucky Derby and has won the 2 Derby prep races, the Wood at Aqueduct and the Tampa Bay Derby.

Omaha Beach is a dark bay colt owned by Fox Hill Farms and is trained by Richard E. Mandella. This horse won the major prep, Arkansas Derby, as well as the Rebel Stakes and has earned 137.5 total points. Omaha Beach will start from post position #12 with jockey Mike E. Smith.

Vekoma is a chestnut colored colt owned by R. A. Hill Stable and Gatsas Stables. This horse trained by George Weaver has earned 110 points and will start from the # 6 post position. With Jockey, Javier Castellano, Vekoma has won the Blue Grass Stakes (major prep) and finished third in the Fountain of Youth Stakes.

This chestnut ridgeling is owned by Imperial Racing LLC and is trained by Brendan P. Walsh. Plus Que Parfait has 104 total points after winning the major prep, UAE Derby, in Dubai. Jockey, Ricardo Santana Jr., will be taking off from post position # 9 with Plus Que Parfait.

Roadster is a grey colt trained by Bob Baffert and is owned by Speedway Stable LLC. This horse with jockey Florent Geroux has won the major prep, Santa Anita Derby and has earned 100 points. Roadster will start from the #17 post position.

This bay colored colt owned by Allied Racing Stable, LLC and is trained by W. Bret Calhoun. By My Standards won the major prep, Louisiana Derby Stakes, and the Maiden Special Weight races with jockey Gabriel Saez. They will be starting from post position #3 and has a total of 100 points.

Maximum Security is trained by Jason Servis and is owned by West, Gary and Mary. This bay colt won the Florida Derby (major prep) and has 100 points too. Luis Saez is the jockey that will be riding Maximum Security in the Derby from the #7 post position.

This horse is another bay colored colt owned by West, Gary and Mary. Game winner is trained by Bob Baffert and has 85 points leading into the big event. This horse finished second in the Santa Anita Derby and the Rebel Stakes while coming in first place in the Sentient Jet Breeders’ Cup Juvenile as well as the American Pharoah Stakes. Game winner along with jockey Joel Rosario will start from post position #16.

This chestnut colt and jockey John Velazquez will hit the track from the #13 post position. Code of Honor is owned by W. S. Farish, trained by Claude R. McGaughey III, and has earned 74 points in the 2019 Road to the Kentucky Derby. This colt finished first in the Fountain of Youth Stakes, second in the Champagne Stakes, and third in the Florida Derby.

Haikal is a bay colt owned by Shadwell Stable and trained by Kiaran P. McLaughlin. Winning first place in the Gotham Stakes and third in the Wood Memorial this horse has a total of 70 points. Rajiv Maragh will be the jockey for Haikal starting at post position #11.

Winstar Farm LLC, China Horse Club International Ltd. and Starlight Racing own Improbable while Bob Baffert is the trainer of this chestnut colt. Improbable has tallied 65 points after winning the Los Alamitos Cash Call Futurity and the Street Sense Stakes. This horse also finished second in the Arkansas Derby and the Rebel Stakes. Improbable’s jockey is Irad Ortiz Jr. and will start from the #5 post position.

War of Will is trained by Mark E. Casse and is owned by Gary Barber. This bay colored colt has 60 points as it placed first in the LeComte Stakes, the Maiden Special Weight, and the Risen Star Stakes. War of Will and jockey Tyler Gaffalione will begin the Kentucky Derby at the #1 post position.

He’s a dark bay colt owned by Willis Horton Racing LLC and is trained by Steven Asmussen. Long Range Toddy has 53.5 total points while coming in first place in the Rebel Stakes and the Remington Springboard Mile Stakes. This colt will be accompanied by jockey Jon Court in the #18 post position.

Tax has earned 52 points and is owned by R. A. Hill Stable, Reeves Thoroughbred Racing, Lynch, Hugh and Corms Racing Stable. Danny Gargan is the trainer for this dark bay gelding. Tax’s jockey is Junior Alvarado and they will start from post position #2. This horse finished first in the Withers Stakes, second in the Wood Memorial and the Maiden Claiming, and third in the Ramsen Stakes.

Cutting Humor is owned by Starlight Racing, trained by Todd A. Pletcher, and will be raced by a jockey that is yet to be determined. This dark bay colt has earned 50 points and has finished first in the Sunland Park Derby. Cutting Humor has the #10 post position in this weekend’s big race.

This dark bay colt is trained by Michael J. Trombetta and is owned by Live Oak Plantation. Win Win Win has 50 points while it finished second in the Blue Grass Stakes and third in the Lambholm South Tampa Bay Derby. Julien Pimental is the jockey of this horse which will start the Derby in post position #14.

Shields, Jr., Mrs. J. V., McFadden, Jr., E. J. M. and LNJ Foxwoods own Country House who is a chestnut colt trained by William I. Mott. This horse has 50 points as it finished 2nd in the Risen Star Stakes, 3rd in the Arkansas Derby, and 4th in the Louisiana Derby Stakes. Jockey, Flavien Prat, and Country House have the #20 post position.

Gray Magician is a gray colt owned by Wachtel Stable, Eclipse Thoroughbred Partners and Barber, Gary. He is trained by Peter Miller, and they do not have a jockey they have decided on just yet. Gray Magician has 41 points in the 2019 Road to the Kentucky Derby with a second place finish in the UAE Derby as well as a fourth place finish in the Sham Stakes. This colt will start in post position #4.

Owned by Wertheimer and Frere and trained by Todd A. Pletcher this chestnut colt has 40 points leading up to the event. Spinoff finished 2nd in the Louisiana Derby Stakes and will start at the #19 post position with jockey, Manny Franco.

Master Fencer is owned by Katsumi Yoshizawa and trained by Tsunoda K. This chestnut colt accepts invitation to compete in the 2019 occasion via the Japan Road. Master Fencer finished second in the Fukuryu Stakes and fourth in the Hyacinth Stakes. Julien Leparoux is the jockey of this Japanese horse that will start in post position #15.

These are the odds according to TOPBET Sportsbook.