The first thing that I want to do is congratulate everyone out there who may be reading who got Holm to win at some extremely long odds.  I believe I saw +1300 reported at the Golden Nugget on the Forum at one point, and I had heard even longer numbers ranging from +1500 to +2000.  Unfortunately, I don't have any concrete proof (nor do I care enough to look) that anyone actually got action at +2000.

The second thing I should do is toss out a disclaimer that I am not a particularly rabid fan of MMA, Men's or Women's, and some would likely suggest that I am not a fan at all.  I defend myself by saying that if there is an MMA fight going on in the rare event that I am channel surfing, (usually only watching NFL games if I have the TV on) it's generally interesting enough that I will stop and watch the bout and the remainder of the bouts on that particular program.  Again, unless there is an NFL game on.

The third thing I would like to do is congratulate "The Preacher's Daughter," Holly Holm on what was clearly a well-fought battle to anyone with eyes, whether or not they have any knowledge of martial arts, mixed or otherwise, whatsoever.  It certainly didn't help that Rousey's fight plan seemed to be, "I'm going to play to every one of her strengths," but it is what it is.

I should probably start paying a little bit of attention to these sorts of things, though, because with just a little bit of research (read: knowing the fight was even happening) I'd have been THRILLED to get some money on Holm at +1300, or more. 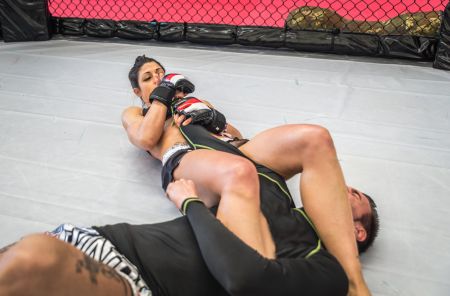 I want to take a second here and explain why, and perhaps, make some comparisons to a few other sports.  The first thing that I would like to do is divulge everything that I could have known about Holly Holm with, say, two minutes of research prior to this fight taking place:

Holly Holm is a southpaw former boxer and I know that there have been many right-handed boxers that have feared skilled southpaw boxers.  Mayweather, for example, was terrified of Pacquiao until Pacquiao was of such an age not to be as effective against Mayweather.  I could also note that, as a boxer, Holm amassed the impressive record of 33-2-3 having knocked out 9 of her opponents, presumably while wearing the sort of thick gloves that they DO NOT wear in MMA.

I could also determine that Holm is an adaptable fighter, having held multiple Women's Boxing Championships in multiple weight divisions.  I would know that she is determined, having reclaimed boxing titles that she had previously lost by coming back and scoring a unanimous decision against a fighter (Anne Sophie Mathis) who straight up knocked the crap out of her in her first bout.  Furthermore, due to this tremendous boxing history, Holm is familiar with the spotlight, so one can assume she would not feel any, 'Jitters,' as a result of, 'Being on the big stage.'

I would also see that she was an undefeated UFC fighter having amassed nine wins, six of which came by knockout.  As a former women's champion boxer, there is certainly no surprise that she has that kind of knockout power.  She was the Seventh-Ranked UFC Women's Fighter in that weight division going into the fight.

Again, I could learn all of that in two minutes.

For the purpose of this example, I'm going to say that the best Odds that could have been grabbed on Holm were +1500, which is essentially 15-1, because it helps with my comparison.

If we were to look at the Super Bowl Futures on VegasInsider.com as of today, we could note that the Seventh-Ranked team (in terms of likelihood to win the Super Bowl) is the Minnesota Vikings.

I'm not even going to analyze the Vikings as a team, I don't have to, I just need to analyze what it would take for them to win the Super Bowl, here's a list:

1.)  Assuming they make the Playoffs (they probably will) they would have to win either three or four (if they don't get a bye) games in order to win the Super Bowl.  These are four consecutive games and it is very likely that they will NOT be the favorite in at least two of those games.  However, for the sake of argument, let's just say that the implied odds were 50% to win every game, in that event, they have a 12.5% chance to win it all if they get a bye and 6.25% chance to win it all if they don't.

2.)  There's a good chance that the Vikings will NOT be the winner of that Division.  First of all, the Packers are only one game behind them in the Standings and they play this week, the Packers have also utterly dominated Minnesota in recent years.  If the Packers win this game, a game in which the Vikings are favored by only one point because of home-field, then they will have a shared record and the Packers will have a victory over them.

That does not necessarily put the Packers ahead in the Division race, however.  They would be ahead in the first criteria, head-to-head record, but they would need either a win or a tie in the final game of the regular season (played in Green Bay) to secure winning that way in the event of a tie in overall win-loss.  The second tie-breaker, in the event Minnesota loses and then beats Green Bay, is Division record which, if the Packers were to lose the second meeting of these teams, the best they could do is tie in Division Record.

I could go on, but there are too many weeks left to play to even worry about getting into third, fourth or thirty-seventh tiebreakers right now.

3.)  Even if the Vikings do win the Division, they still might not get that bye week.

First of all, the Carolina Panthers are unbeaten and the two teams do not play this regular season.  Therefore, they have two wins on the Vikings right now and a slight advantage in strength of schedule with the combined record of the Panthers remaining opponents being 31-34 to 38-26 for the Vikings remaining opponents.  Actually, that's probably more than a, 'Slight,' advantage.

The Arizona Cardinals will prove interesting because the two teams are currently evenly matched with a 7-2 record, and the game between the teams WILL settle the matter in the event of a tied record.  That game will take place in Arizona, although, Arizona are 1-2 this year at home compared to 4-0 on the road, so maybe they'd actually prefer to play in Minnesota.  In any case, barring a disappointing performance from either team (or injury) in the next three weeks, Arizona will be the slight favorite to win that game.

Carolina would need an epic collapse for Minnesota to end up with a superior record.

4.)  The Vikings might not make the Playoffs AT ALL.

This is going to be my shortest point because it is not a very good one.  Personally, I think it is extremely likely that the Vikings will make the Playoffs because you have Atlanta and Green Bay as the running WildCard teams if the season ended today, to finish worse than Green Bay would mean Green Bay won the Division and would put Minnesota in that WildCard slot.  Aside from that, the closest non Division Leader is 4-5 and is a full three games behind Minnesota in potential WildCard Standings with only seven games to play.

Two of those teams do play Minnesota this year, however, and I believe that the Vikings will only be favored in three of their last six games, so it is not ridiculous to believe that one of those other teams could catch Minnesota if the Vikings drop this one to the Packers.

Dearest Mission146:  What Was the Point of Making Me Read All of That Football Bull**** Unrelated to the Topic at Hand?

Again, theoretical poser of inquiry, my point is that the Minnesota Vikings have to go up against all of those possibilities, not to mention the fact that I assumed they were 50% to win every game in the Playoffs, (assuming they do win the Super Bowl, the implied Odds will have them at less than a mean of 50% to have won any given game in the Playoffs) and they are 15-1 as a Super Bowl Future team.

The bookmakers are implying (as of the time that Holm was getting +1500) that Holly Holm beating Ronda Rousey was no more or less likely than the Vikings winning the Super Bowl.

Holly Holm, the multiple-time boxing champion, only needed to land one really good punch.  The Vikings need to do A LOT!!!

My point is that, if you ever see those kind of long odds on a fight event in which the two combatants are extremely talented professionals with a proven track record of success, you might do well to get a few bucks down on it.  Always do your own research, though, because that statement might not always be true, but generally speaking, those kinds of odds on a well-hyped event are worth a little further investigation.

Congratulations to those of you who did your homework.