Ron44
Joined: Aug 22, 2019
Baccarat or Mini-Baccarat
1. Are flat bets the safest bets which have the least risk of losing your session bankroll?
2. Does betting on patterns either streaks or chops improve the chances of betting on a winning side?
3. Does shuffling after each hand versus after each deck versus shuffling at the end of a six deck shoe affect the odds?
Any input would be appreciated. Thank you.
kubikulann

Baccarat or Mini-Baccarat
1. Are flat bets the safest bets which have the least risk of losing your session

The least risk is not playing at all.
What do you mean with ‘losing your session’? What is a session: a predetermined number of rounds? reaching an objective? play until the bankroll is exhausted ?

2. Does betting on patterns either streaks or chops improve the chances of betting on a winning side?

No. One round is independent from the past (no memory).

Baccarat or Mini-Baccarat
1. Are flat bets the safest bets which have the least risk of losing your session bankroll?
2. Does betting on patterns either streaks or chops improve the chances of betting on a winning side?
3. Does shuffling after each hand versus after each deck versus shuffling at the end of a six deck shoe affect the odds?
Any input would be appreciated. Thank you.

There are ways of interpreting your questions.
Nothing you do by way of changing betting levels can make any difference to the house edge.

So your best chance of not losing your bankroll is to not bet.
The 'best' way of extending your session is to repeatedly min bet on banker: BORING.
More exciting, but likely to shorten your session is any kind of progression. I find a 1,2,3,3,3 progression mildly amusing.

If you wish to make a tiny, insignificant profit, then you could martingale from a minimal starting stake and quit as soon as you are ahead That can actually give you a very very high probability of winning, say $1 with a low possibility that you will go home broke. But it will be an incredibly short session of an average number of wagers between about 1 and 2 wagers.

To me, Baccarat is as boring a way of losing money as I could ever imagine.

A baccarat 'expert' will be along shortly to regail you with his stories of successful money management and 'hit and run' technique. Don't buy such nonsense.

Oh, and Marty is just another fun way of losing money. I don't recommend it unless you have more money than sense or you are absolutely desperate to win a dollar.*

*I ignored the 95% payout of Banker bet
Take care out there. Spare a thought for the newly poor who were happy in their world just a few days ago, but whose whole way of life just collapsed..
7craps

Baccarat or Mini-Baccarat
1. Are flat bets the safest bets which have the least risk of losing your session bankroll?

You really need some kind of win goal target as ANY bankroll without a target has a 100% ruin probability.
and... define 'flat bets'


difference is only average number of rounds to ruin
Last edited by: 7craps on Aug 22, 2019
winsome johnny (not Win some johnny)
MDawg

For example, here's a shoe I played during a trip earlier this year. Not even the best shoe of the trip by any means, but a nice one: 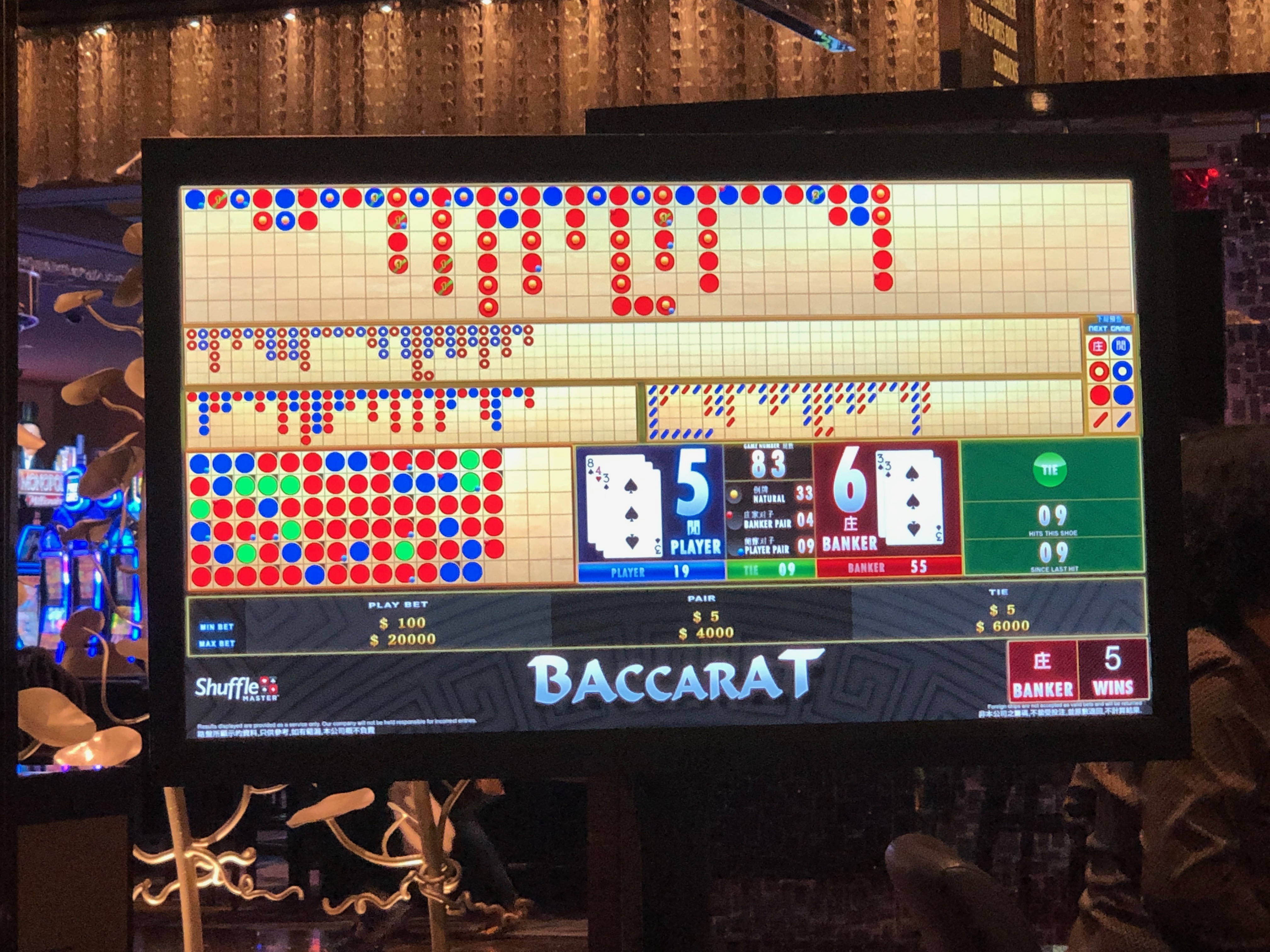 VERY early on in the shoe it was obvious that the pattern was "player runs only one." Even the dealer was saying this, and even the dealer at the unoccupied table next door who was looking at the back of the screen was saying it. You'd have to be an idiot not to recognize that pattern.

So, every time player ran one I would bet the bank big. Since I'm a believer in streaks, I would additionally press into each bank run. In the old days I would have cleared easily a half million on a shoe like this. This time, I didn't get that I don't play like that but this was definitely a shoe where I was pressing to a couple thousand a hand.

But the key - again - was to LEAVE after this shoe. You just get a sense for when things can't get any better. You must also have a sense for when the shoe is not following any pattern, and to drop your bet, switch tables or just plain leave.

Same with BJ, there is more to it than just the count. You could have a great count and be getting crappy cards with the dealer getting all the good stuff. Following the trend also means pressing the bet when you keep winning. Or leaving when it's just not happening.

Don't be that guy who is clutching his chips desperately betting knowing inside that there is no way for this to end short of losing his entire bankroll. But also, DEFINITELY don't be that guy who can't recognize when the chips are flying and it's time to press. Years and years of experience have taught me the difference.

One of these guys who posted above negatively could be presented with the above Bacc. shoe and not win a nickel. Hard to imagine, but true.
I tell you it’s wonderful to be here, man. I don’t give a damn who wins or loses. It’s just wonderful to be here with you people.
Ron44

MDawg
Joined: Sep 27, 2018
None of those betting systems works so I can't comment there. There is no hard and fast rule as far as what exactly to press is what I mean.

You mention betting only player...put it this way, I have seen players dump anywhere from thousands to tens of millions right before my eyes stubbornly betting player against a bank run. That shoe above would be a very bad shoe to bet player. On the other hand, I have cleaned up massively on a shoe with so many players back to back followed by just one bank followed by even more players back to back (twin player runs) that the pit bosses have literally been smacking their foreheads over the amount of chips flying out of the tray. Meaning, anyway, that betting always bank or always player is an over all sure loser.

As far as getting a "free hand" I play midi or grand Bacc. only, and most casinos will give you as many free hands as you like. One exception for example is the Hard Rock Vegas, which is fairly player unfriendly for both BJ and Bacc., and in Bacc. the HR Vegas allows only 3 free hands per shoe. If you run out of or are not allowed free hands yes betting both player and bank at the same time is one way to do it, at a slight cost.

There are times when I will use free hands such as at the beginning of the shoe but I've also come right up to a brand new shoe and bet bank, won, tripled, won again on bank, tripled a third time won again on bank, and then am left with a big decision as to what to do next...of course getting three banks right off the bat on a new shoe is just blind luck but I bring it up just to point out that free hands aren't always the way to go.

I've also hit four blackjacks in a row on a shuffle right out of the gate all played to table max, again just blind luck but sometimes your bet and your luck just coincide. Sometimes all it takes is winning one hand with a big bet, and now you don't care because you won a lot, and leaving that big bet up there and a run happens.

If you get to the point in a Bacc. shoe when you are asking for a lot of free hands it's probably time to take a break because you'll probably notice that at that point you're winning the free hand mental bets and losing the real ones, in other words that something (meaning the shoe) is probably going random and it is time to leave.

Look...put it this way, standing behind a Bacc. shoe watching it, for the most part it looks to an outsider like there is no way to win. But when you're in the shoe and a pattern emerges and keeps repeating and you press into it, that's the way to win. Another sure fire way to win is 2 or 3 banks appear and you jump on bank or already were on bank, and then press as more and more banks come. Of course, again that is the luck of being there when a massive bank run happens, but beyond the luck is to leave quickly if the run doesn't happen again. Whenever I have played there has been always at least one ten bank (or player) run usually more like 13 or so, in one or more of the shoes I play that day. The details of how to preserve capital until those inevitable runs or patterns emerge is not really something that may be taught. It's the same reason why some gamblers perceive when the clutch is there and are able to press into big victories and some gamblers will never be able to win.

In the shoe above there was no reason to leave until the shoe was over the pattern of only one player was broken only thrice, and it was an easy shoe to win at. Really, on a shoe like that it's only a question of how much you're going to win.
I tell you it’s wonderful to be here, man. I don’t give a damn who wins or loses. It’s just wonderful to be here with you people.
ChumpChange

I always bet Player on the home game because my betting pattern depends on not paying a 5% vig.
Ron44

Ron44
Joined: Aug 22, 2019
MDawg, Thank you very much for your detailed reply which gives me a lot to think about. Some people would say that intuition enables a gambler to press into big victories. I realize that intuition cannot be taught. I can certainly improve my game skills in other areas thanks to your information. Good gambling to you.
RSS Feed