it just that the Gen 3's are rock solid and when the 4's came out they had problem after problem with them....
AcesAndEights

it just that the Gen 3's are rock solid and when the 4's came out they had problem after problem with them....

Ah okay, good data point. I'll keep that in mind.
"So drink gamble eat f***, because one day you will be dust." -ontariodealer
QuadDeuces

I wonder where she keeps the magazine.
bbvk05

The gen4 guns have extraction issues in the 9mm models. They've issued two revisions/reccalls but it isn't fixed. Im Still seeing a high rate of malfunctions in my classes. I'm a huge glock booster, but stick to gen 3 in 9mm.

That said, 9mm is the right choice.
EvenBob

EvenBob
Joined: Jul 18, 2010
This is a super article on how to carry a concealed
handgun. It covers everything and in great detail.

Look at the site while you're there. There is a ton
of good info for men there, you're bound to learn
something worthwhile.

http://artofmanliness.com/2012/09/26/guide-to-concealed-carry/
"It's not enough to succeed, your friends must fail." Gore Vidal
pacomartin

This is a super article on how to carry a concealed handgun.

A gun for Barbie? Woman meets dealer who is muscling in on her territory.
Instant Attraction.
Gets into his van for instant gratification.
Afterwards still decides to do what she came there for...
so she draws a small pistol and Dealer contemptuously comments
"that is a .22"
Woman: "Yeah, but look where I've aimed it".
Dealer turns deadly pale with fear.
EvenBob

EvenBob
Joined: Jul 18, 2010
This gives you what, about 50 rounds? For the
guy who's a really bad shot, or has seen too
many Steven Segal movies.

"It's not enough to succeed, your friends must fail." Gore Vidal
pacomartin Are these things really useful for self defense? What if you some kid runs up to you and grabs this gun out of your belt. Are you responsible?
Face
Administrator

Face
Joined: Dec 27, 2010
I’d say mostly ridiculous. You can get a proper used gun for about the same amount, one that… just isn’t so bloody ridiculous.

A .22 isn’t a manstopper. Better than nothing, but just no.

Unless you wear an untucked long shirt, you’re going to run into legal problems in many states, and a hassling from LEOs in most others.

I had a gun about that size, a 6 shot Derringer that shot .22SR. It was bitch to manipulate, just too small for man hands.

How’s it secured? Well enough to stay put while being easy to release? I can’t suss it out from the pic.

I’d say it’s mostly a fashion accessory or conversation piece. I wouldn’t fault someone for carrying it, but as a serious SD measure? That’s just nonsense.

Laws vary, but yeah, you can be charged with a crime if your gun falls into the wrong hands and is used for misdeeds. I’m sure most states would at least nick you for child endangerment or some kind of negligence, if not something more serious.

Edit: I'm not sure which is more absurd. It's too close to call. 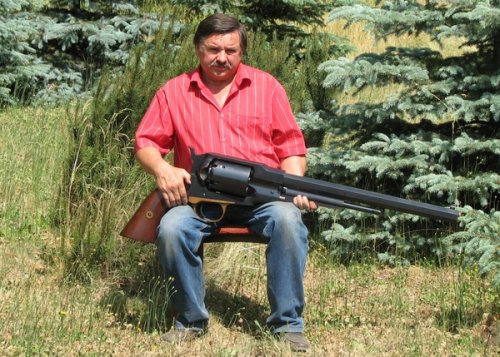 The opinions of this moderator are for entertainment purposes only.
RSS Feed