MrCasinoGames
Joined: Sep 13, 2010
Resorts Casino in A.C. rebrands itself as 'One of a Kind' http://bit.ly/33kpdKt
* ATLANTIC CITY — The city’s oldest casino has launched a new branding campaign designed to showcase its uniqueness among a crowded gaming market.
Resorts Casino Hotel unveiled its “One of a Kind” marketing strategy Tuesday, which executives said will better position the 41-year-old casino for the future. http://bit.ly/33kpdKt

18. "IGT PlaySports is powering more than 30 betting venues in ten US states". http://bit.ly/2B1pSV9

31. OPINION: In Maryland, is it schools vs. racetracks? http://bit.ly/33nNEac

Casino Chip-Tricks of the Week by Stephen Au-yeung: 5-Chips Star.

Game-3. Ten20® Bonus Blackjack™: Ten20Bonus.com
* The Ten-20® Side-bet wins when the Player’s Initial Two-cards Blackjack-hand add-up to a Total of 10-points or 20-points.

Game-4. ContrastBonusBlackjack.com
* THE FIRST Blackjack Side-bet, based on the Player’s Initial two-card Blackjack-hand to have different colours and went-on to WIN the hand.

Game-5. Contrast® Bonus Baccarat™. ContrastBonus.com
* THE FIRST Baccarat Side-bet based on the Contrast-Color of the TOTAL Dealt-cards

Game-7. Perfect-9® Bonus Baccarat™: Perfect9Bonus.com
* A Baccarat Side-bet based on the Player's or Banker's hand, that pays when the first initial two-card of the selected-hand make a total of 9-points.

BTW, At G2E I will be giving away some Roulette18® Card-Protectors (See Imsge). 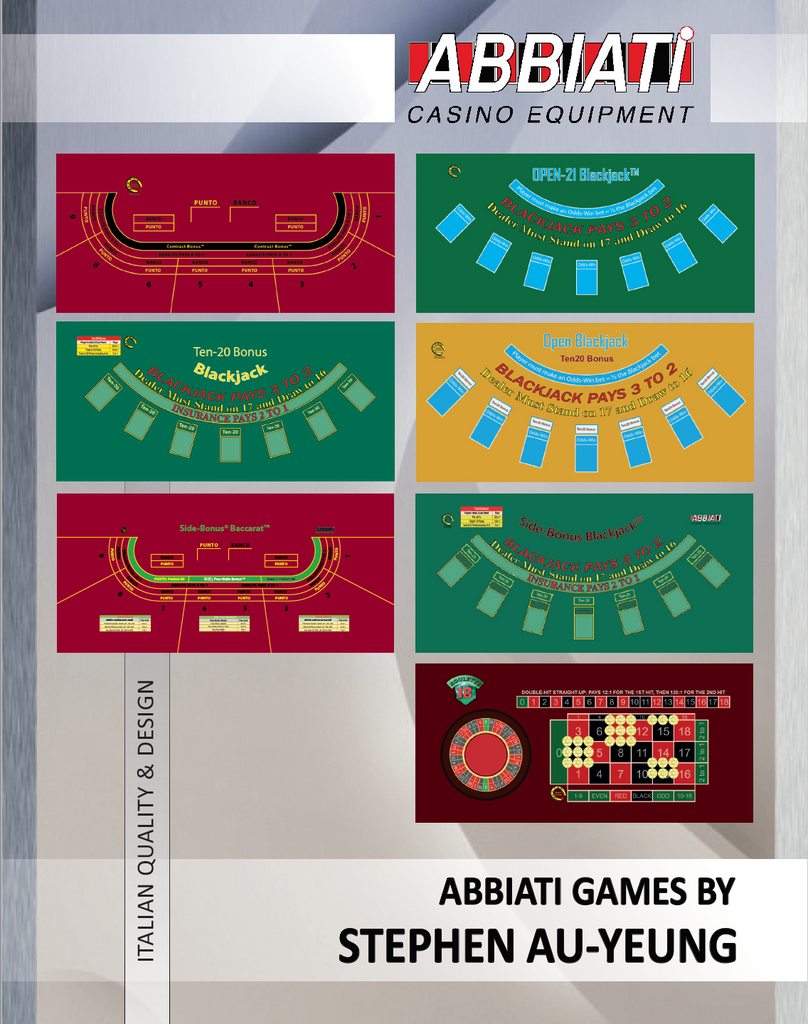 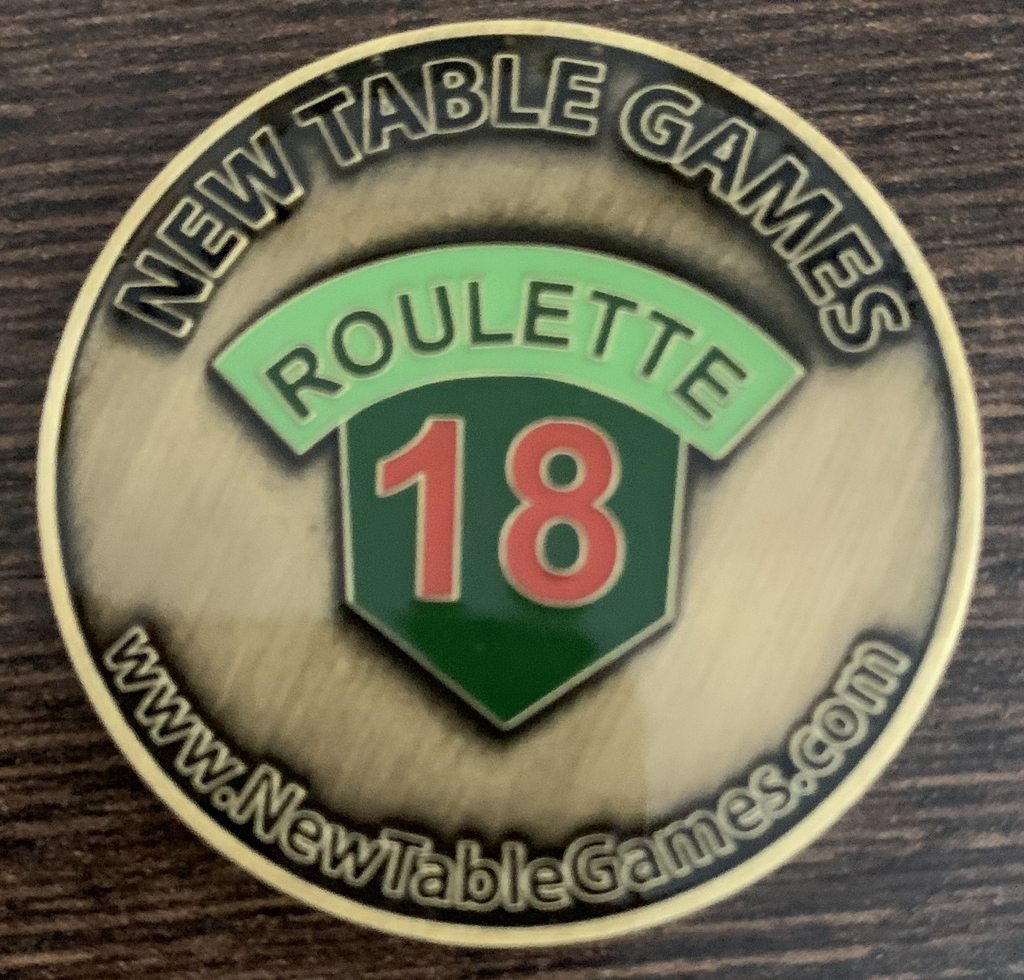 There will be no Gaming-News this week, as I am too busy with the G2E-Vegas show.
Stephen Au-Yeung (Legend of New Table Games®) NewTableGames.com
MrCasinoGames

8. Paysafe launches MobilePay in US. http://bit.ly/2N0KzpW

11. G2E: Using a credit card to gamble on a slot machine? There may soon be an app for that. http://bit.ly/2MVfGDe

13. Atlantic City taxes could go up next year, but they don’t have to. http://bit.ly/2Pd1yIp

15. (Washington D.C.) The Washington Redskins’ dreadful season continued Sunday when they lost to the unbeaten San Francisco 49ers 9-0 in a rain-soaked affair at FedEx Field that was absolutely brutal to watch. But here is some good news for any Redskins fans who laid some money down on the hometown team. http://bit.ly/2VZnAzy

16. (Georgia) A Georgia House panel that met three times last week to study whether to expand gambling didn't start its hearings with the traditional invocation from a lawmaker. http://bit.ly/33TSWdL

17. (Illinois) The latest entry in the south suburban casino sweepstakes aims to put a new gaming facility less than two miles from the Indiana border at the River Oaks shopping center in Calumet City. http://bit.ly/2qq8My6

18. (Illinois) Cynde and David Bunch bet on a vision for a resort and casino at her family homestead, and that bet is one step closer to a payoff. On Friday, the Williamson County Board approved the $180 million project that will make Bunch’s vision a reality. http://bit.ly/2BxuB1b

19. (Arizona) An illegal underground casino operation was busted in Phoenix recently, according to the Arizona Department of Gaming. The ADG says their investigation into Tom’s Amusement, or Tom’s Warehouse, near 21st and Peoria avenues began in March of 2019. http://bit.ly/2P6kAA4

20. (California) A 3-year-old gelding was fatally injured in the fifth race at Santa Anita on Saturday, becoming the 34th horse to die at the track since December. According to a statement from track owner The Stronach Group, jockey Ruben Fuentes pulled up Satchel Paige at the three-eighths pole of the 6½-furlong sprint. http://bit.ly/35SKRb6

21. (Las Vegas) A stand-alone sports betting booth where gamblers can place wagers, watch the games and cash out without visiting the sports book counter. A slot machine themed after “Star Trek: The Next Generation.” 4D interactive screens with adjustable intensity. They’re all here at the Global Gaming Expo in Las Vegas, where the tinkerers behind the most popular slot machines and gambling technology every year share a glimpse of what’s coming soon to casino floors near you. http://bit.ly/2P3N5hA

22. (Las Vegas) Victoria Siegel was the type of kid who would routinely visit the local Humane Society shelter. Sometimes, she just played with the dogs. Other times, she came home with a pet. http://bit.ly/35PUpn4

FleaStiff
Joined: Oct 19, 2009
NYC illegal casinos go back EONS. The fanciest was in the Chelsea District of Manhattan, the strangest was in a school for Rabbis in Brooklyn. Fun and games for the price of a subway token. No trip to Vegas, no trip to Atlantic City. No frills, no shills.
MrCasinoGames

2. Hard Rock could purchase hotel on the Strip. http://bit.ly/2JeK0aT

10. Can colleges police sports betting? Some are trying. http://bit.ly/33WNuXE

14. (Connecticut) Quietly over the summer, with zero fanfare and nary a public announcement, MGM Resorts International renewed a contract giving it the option to develop a casino in Bridgeport Harbor on land controlled by RCI Group. http://bit.ly/2BzlT2r

15. (Atlantic City) The future of the 73-year-old Atlantic City Race Course remains unknown 18 years after Greenwood Racing Inc. purchased the track for $15 million. However, the first step was taken recently to have something done with the 250-acre parcel of property for the first time since it closed four years ago. http://bit.ly/31Ecf9o

16. (Georgia) Atlanta Motor Speedway released a rendering of a $1 billion casino resort at the racetrack, a week after its president made the proposal. President Ed Clark said it would include a hotel, condos, restaurants and maybe even a theme park and concert venue. The rendering includes an indoor and outdoor water park, and a Top Golf interactive driving range. http://bit.ly/2o7Avmr

17. (Indiana) A casino could generate $168 million for Vigo County according to a recent study. The Advance West Central Indiana Political Action Committee Monday released the results of the study conducted by the Innovation Group, a gaming consulting firm. http://bit.ly/2P8oeJx

18. (Illinois) The Matteson Village Board of Trustees unanimously approved the Choctaw Nation's plan for a casino in their Monday night board meeting. http://bit.ly/2oSIlkt

19. (Michigan) A Native American tribe is planning a $100 million expansion of its western Michigan casino that will include new dining, entertainment and gaming space. The Gun Lake Tribe said preliminary site work has started at the casino in Wayland. http://bit.ly/2PaICtN

20. (Iowa) As a greyhound park is announcing its imminent closure, an eastern Iowa park is hoping to hold on. The owners of Southland Casino Racing in Arkansas announced its live racing will close by the end of 2022. This comes after Florida voters agreed to stop greyhound racing in that state by the end of 2020. Brian Carpenter, Iowa Greyhound Park General Manager, said this could trigger the closure of more parks across the country, and possibly even the one in Dubuque. He said the main issue will be finding dogs. http://bit.ly/32HzuRa

21. (Las Vegas) In a major victory for NV Energy, the electric utility has filed a proposed contract with utility regulators to provide a new, reduced-rate pricing system for the Raiders’ stadium and team facilities, reversing earlier plans for the football team to operate independently of the state’s largest electric utility. http://bit.ly/2qzrUtD

22. (Singapore) Three local banks, as well as casinos at Resorts World Sentosa and Marina Bay Sands, were commended by police on Monday for their efforts in combating money laundering and terrorism financing that led to seizures of more than S$25 million. http://bit.ly/2oV21nS

23. (Macau) The International Monetary Fund (IMF) has forecasted that the Macau SAR’s economic growth is slated to return only in 2024, as the earliest year for which it has data showing gross domestic product expansion. http://bit.ly/2BvxgZj

This Week in Gambling. VIDEO: http://bit.ly/2p89Ru6
There's a lot of gambling news coming out of Las Vegas this week, as more Strip casinos have been sold. But the big news involves the Nevada Gaming Control Board and casino mogul Steve Wynn! We're also covering stories from Google, MGM Resorts and Taco Bell! Links to gambling news stories, games reviews and special offers below.

ATLANTIC CITY — Sports betting, online gaming and two new properties are helping to push the casino industry toward a revenue benchmark in 2019 it has not reached since before the market began to contract.
The industry has reported revenue increases for 16-consecutive months, dating back to the dual openings of Hard Rock Hotel & Casino Atlantic City and Ocean Casino Resort in June 2018.

4. Virginia: The status of casino projects in Hampton Roads. http://bit.ly/2BBjqED

5. (National) Sportsbooks aren’t in the habit of identifying their customers, and most whales keep low profiles and don’t go out in search of publicity. Therefore, in most cases, the stories behind the bets aren’t readily available. In a way, the limited details add intrigue and mystery to the stories that come out of sportsbooks on a daily basis. http://bit.ly/2BEPCah

6. (Pennsylvania) September was a very good month for online slots revenue in Pennsylvania, though the interactive table game segment was flat. http://bit.ly/33Vc7Un

9. (Illinois) The City of Rockford has given video gambling operators the green light to add more machines. On Monday, Rockford aldermen voted to increase the maximum number of machines allowed at each location from five to six. http://bit.ly/2W8sNoJ

10. (Illinois) The village board in south suburban Matteson approved plans to develop a new casino on Monday night. The proposed casino would be operated by the Chocktaw Nation of Oklahoma, and would sit at the corner of Lincoln Highway and Harlem Avenue. http://bit.ly/2Jh2t6R

11. (Michigan) FireKeepers Casino Hotel in Battle Creek, Mich., has signed a deal with Intelity as part of the hotel’s multimillion-dollar expansion, which will add a new eight-story tower to the property. http://bit.ly/2BDIgDU

12. (Nevada) There was a time that nearly all Las Vegas Strip casinos hosted a poker room. The exceptions were Casino Royale, Cosmopolitan, Encore, New York-New York, Paris Las Vegas, and Palazzo. Of those, Encore, Paris Las Vegas and Palazzo had poker rooms at sister properties that connected through an indoor shopping corridor. http://bit.ly/2BBizDR

13. (Las Vegas) The skyward progress of downtown’s newest resort is on schedule, but Circa owner Derek Stevens still has a few surprises up his sleeve. http://bit.ly/2W9bAf5

19. Bellagio $4.2B sale may be most expensive Las Vegas resort deal. http://bit.ly/2p7Nwgq

22. R.I. sports betting revenues for first quarter were less than half of what state budgeted. http://bit.ly/31HLlgN

24. The many ways the NBA has embraced legal sports betting. http://bit.ly/2JfY4kt