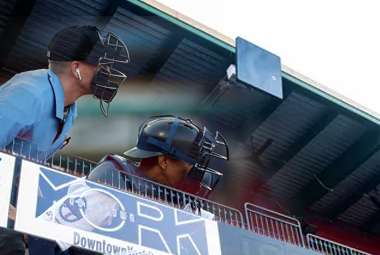 The Atlantic League is a professional men’s baseball league that is not associated with Major League Baseball in any way. In fact, they do not operate in any city or suburb where an MLB team or MLB affiliate (A, AA, or AAA) exists. They were the first to use an electronic umpire to call balls and strikes during a game which happened to be the Atlantic League All Star Game.

Although, the MLB doesn’t work directly with the Atlantic League it does acknowledge all of the testing to the game of baseball that they do. The MLB takes all things like this into consideration when changing the rules to America’s past time.

A TrackMan computer analyzes balls and strikes that are thrown by the pitcher utilizing doppler radar technology. The behind the plate umpire receives the calls from an iPhone in his pocket that is connected to an earpiece that he wears in his ear. The umpire then signals the ball and strike calls.

It seems like there is an apparent delay on the calls having batters wait a couple extra seconds to find out if they struck out or not for example. Another flaw reported is that if a ball bounced in front of the plate and crossed the plate through the strike zone it would be called a strike when it should be a ball. Obviously the behind the plate umpire can easily correct that call.

"Until we can trust this system 100 percent, I still have to go back there with the intention of getting a pitch correct because if the system fails, it doesn't pick a pitch up, or if it registers a pitch that's a foot-and-a-half off the plate as a strike, I have to be prepared to correct that," says plate umpire Brian DeBrauwere prior to the game. 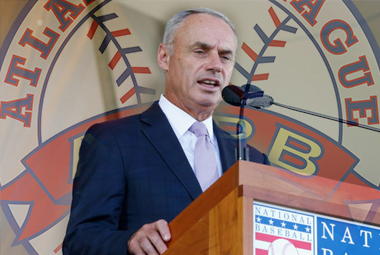 "One time I already had caught the ball back from the catcher, and he signaled strike," explained pitcher Daryl Thompson.

"The future is crazy, but it's cool to see the direction of baseball," replied Infielder L.J. Mazzilli.

"If the umpire still has discretion, it defeats the purpose," says former MLB player, Kirk Nieuwenhuis who played with the Mets, Angels and Brewers.

"This is an exciting night for MLB, the Atlantic League, baseball generally," stated Morgan Sword who is the MLB's senior vice president of economics and operations. "This idea has been around for a long time, and it's the first time it's been brought to life in a comprehensive way."

"After that, we're relatively confident that's it's going to spread through organized baseball," says Atlantic League President Rick White. "We're very excited about what this portends not only for our league but for the future of baseball. What we know is technology can help umpires be more accurate, and we're committed to that. We think the Atlantic League is being a pioneer for all of the sport."

"One of our focuses is not to replace the umpire," explained Sword. "In fact, we're trying [to] empower the umpire with technology. The home plate umpire has a lot more to do than call balls and strikes, and he's going to be asked to do all of that. We're in touch with our umpire’s union, and this is the first step of the process."

"This is just another plate job, and I just get a little help on this one, so I feel very relaxed going into this one," DeBrauwere stated.

"We need to see how it works, first in the Atlantic League and then probably other places, meaning other parts of minor league baseball, before it comes to Major League Baseball," says Rob Manfred who is the commissioner of Major League Baseball. "Kind of gets back to the question that I was asked earlier about the baseball. We hear all the time from players: Why don't we have an electronic strike zone, why don't we have an electronic strike zone? We try to be responsive to those sorts of expressions of concern. We have spent a lot of time and money on the technology. It's not just to address player concerns. It obviously has broadcasting uses. That same technology can be used in our broadcast, which has value to our fans. But we feel it's incumbent upon us -- people that play the game raised this as something that could make the game better. We kind of feel it's incumbent on us to figure out whether we could make it work. And that's what we're doing."

I'm not sure where to stand on this. Both sides make good points. Baseball is a game of tradition, including the tradition of having human umpires making some all too human play calls. On the other hand, there would be value in having an honest strike zone that is impartially monitored. The new zone would narrow to the actual width of the plate (favoring batters) while rising upward so that high pitches above the belt but below the middle torso would now be correctly called as strikes (favoring pitchers).

I've heard that catchers are against the new tech since it would eliminate their art of framing a pitch. That's true enough, but complaining that this will make it impossible for them to deceive the officials is a hard argument to make in court.

I've also heard the pro tech side say it was unfair for teams to track the strike zones of 68 different umpires. But come on ... Baseball is the ultimate statistical sport. A team that thinks it's a good idea to fanatically watch the hitting and pitching stats of every damn player from the majors down to the high schools but can't be bothered to consider the strike zones of the umpires in the games it'll be playing deserve what it gets.

Anyways, I suppose this type of tech is inevitable so we might as well embrace it. What choice do fans have?

The story notes the delay in getting the call, but surely this would be corrected to some sort of instant way if ever implemented?

I've looked into the accuracy issue elsewhere before - apparently as long as the system is set up the way the techies want, and can be initially calibrated before the game starts, it is accurate to within one inch. This was proved by literally throwing baseballs into gypsum board to mark where the pitch traveled beyond doubt. Some of what is shown on TV may not be to these standards, but I assume would be for real game use.

I lean towards staying with traditional methods anyway, just not crazy about the intrusion of technology into everything.

The AP is reporting that computer plate umps are now allowed in a new MLB labor deal...