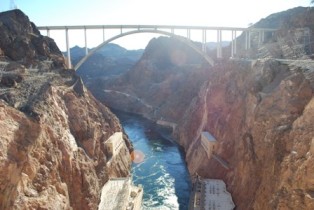 Before anyone writes me, let me first address the name of the bridge. The official name is the "Mike O’Callaghan-Pat Tillman Memorial Bridge." I respect that as the official name, but with no disrespect to either person the bridge was named after, that is quite a mouthful. The website for the bypass project refers to the bridge as the "Colorado River Bridge." That sounds good and is easy to remember, but there are lots of bridges that cross the Colorado River. Maybe none of them are officially titled the "Colorado River Bridge," but it still lacks specificity as to which bridge crossing the Colorado it is. The term I like is the "Hoover Dam Bypass Bridge," which I have heard mentioned in the local media.

Whatever you call it, the bridge is, as of it's opening, the 14th highest bridge in the world and the 2nd highest in the U.S. at 890 feet high according to highestbridges.com . By "high" I am referring to the height from the ground, not the structure itself. The 1,900 foot long span arches over Black Canyon Gorge about 1,500 feet south of Hoover Dam. The Bypass project, which included constructing the bridge itself and the supporting roadways on both the Arizona and Nevada sides, took around seven years to complete at a cost of $240 million. It was completed 2 years later the original expected completion date and would've been significantly over budget if the construction company hadn't eaten the extra expenses. This is ironic when you consider the Hoover Dam was completed nearly 2 years early and a few million dollars under budget.

One question I get a lot from visitors to Las Vegas is, "Do you recommend visiting Hoover Dam?" My response the last two years has been, "If you plan to return to Vegas again, hold off until they finish the bypass bridge. The Dam traffic is horrible. If you wait, and go during non-holiday times, there should be few traffic issues, and you'll be able to enjoy the bridge as well." I'm not right about everything, but about this, I think I was. Now, you indeed can enjoy fantastic views of the Dam from the bridge, and you can enjoy Hoover Dam with little or no traffic and very few cars driving on it.

The bridge opened to car traffic quietly during the late evening on October 19, 2010. A couple days later, they opened the pedestrian walkway, but the papers warned of parking problems to the access stairs. So, I parked at the Hacienda Casino, about four miles from the bridge, and rode my bike the rest of the way. This turned out to be unnecessary, as car access to the bridge stairs was quite unencumbered.

To get to the bridge from Las Vegas, drive east bound on US 93, through Boulder City and passed Lake Mead. Just past the Hacienda Casino, there will be an exit for the Hoover Dam. If you stay on the 93, you'll cross the bridge. However, due to four-foot high concrete walls on either side, you won't see anything as you cross. There are no parking areas along the 93 to pull over and have a look, and stopping on the bridge will surely get the attention of the authorities and earn you a ticket and/or a towed vehicle. After you take the exit off 93, and before you get to the Dam, you'll come across the parking lot for pedestrian access to the bridge. If you're heading into Arizona after some some sightseeing at the Dam or on the pedestrian walkway, be warned that you can't rejoin the 93 on the Arizona side. The Hoover Dam road exit dead ends about one mile past the Dam on the Arizona side. 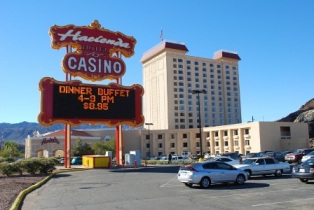 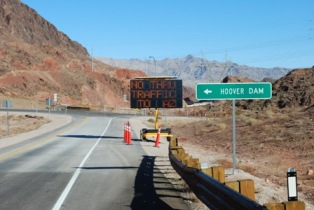 After taking the Hoover Dam exit, you'll make a clearly marked left turn to get to the Dam. If you turn right, it will lead you to a parking area for Gold Strike Canyon, which features a very scenic, and somewhat difficult, hike to Gold Strike Hot Springs, which I plan to write about in the future. To get to the Dam, and to the bridge's pedestrian walkway, just follow the signs; it would be almost impossible to get lost. 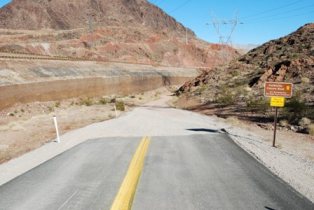 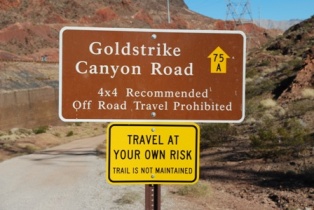 A few miles down the road, you'll pass "Memorial Bridge Plaza." This is where you park to walk across the bridge. When I was there, the parking lot was about 75% full only. This was on a Wednesday at about 3:00 PM. Your odds will likely be worse on a weekend, and it may be particularly hard to claim a parking spot on a holiday. However, if it is full, fear not: there is a dirt parking lot on the opposite side of the road. In the unlikely event that is full too, there is lots of parking at the Dam, and a walkway leading from the Dam parking garage up to the bridge stairs. The fee for the parking garage is $7, but there is some free parking on the Arizona side. 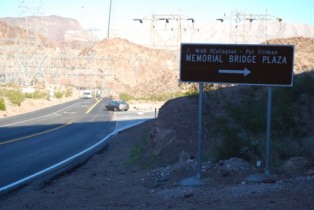 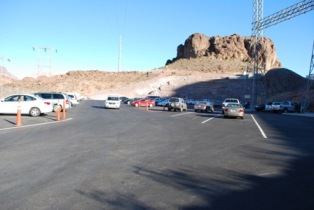 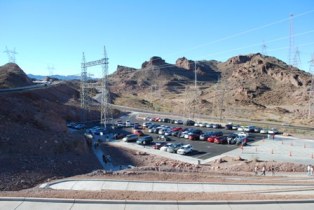 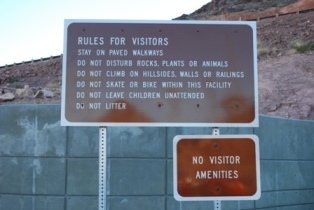 Once at the parking lot, there are stairs leading up to the bridge and pedestrian walkway. There are also handicapped ramps, which I rode up on my bike. At the top of the stairs, you'll make a few turns and soon enough you'll be at the bridge. On the bridge itself, there is about a four-foot wide pedestrian lane on the north side, facing the Dam. There is a concrete wall separating the pedestrian walkway from car traffic, so you can enjoy the bridge and views without worrying about getting hit by a car, much like on the Golden Gate Bridge, which is another fun and pedestrian-friendly bridge. 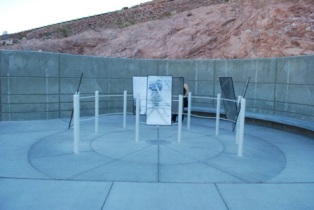 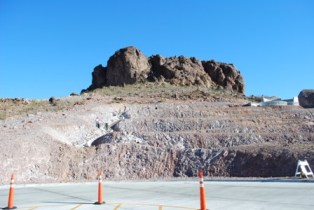 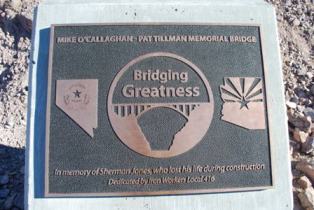 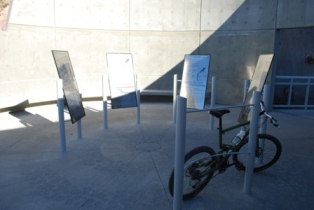 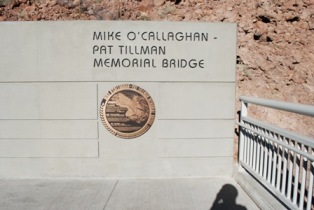 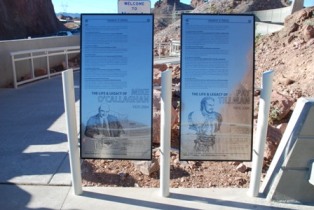 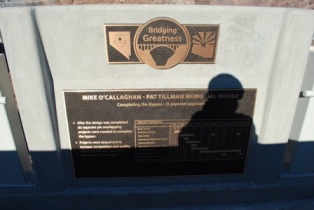 The views of the Dam are magnificent. I hope these pictures do them justice. When you get to the other side, the Arizona side, a barrier turns you back. There is nothing left to see anyway after you cross. From the parking area to the bridge itself, there are lots of informative signs about the Dam, the bypass construction project, the Colorado River and the Hoover Dam Bypass Bridge itself. My pictures capture only some of them.

After walking the bridge, I went down to the Dam itself, which is about another half mile down the road. I wanted to get some pictures of the entire bridge. The sun was directly in my eyes when I took these pictures, so forgive the lighting. While at the dam, I highly recommend doing the tour. I may write about the dam in more detail in a separate article another day. 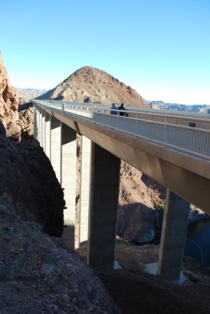 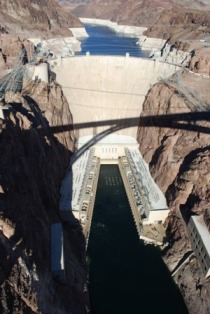 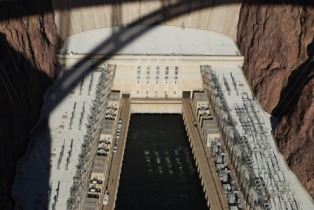 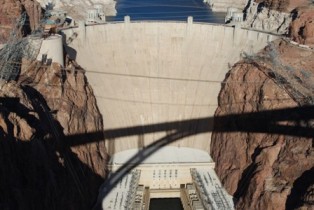 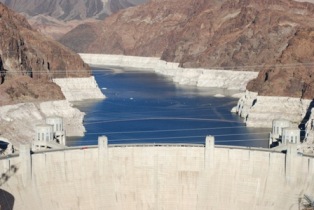 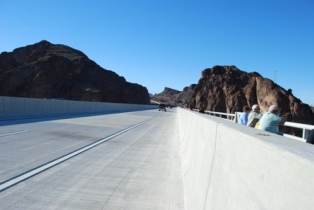 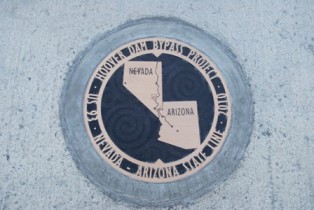 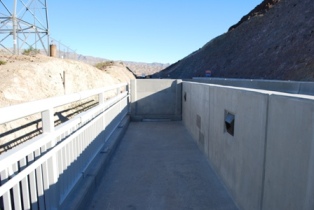 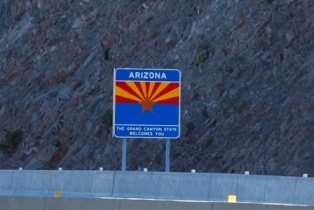 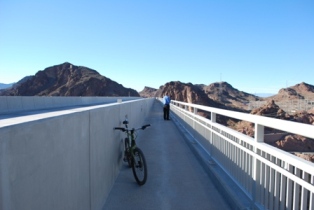 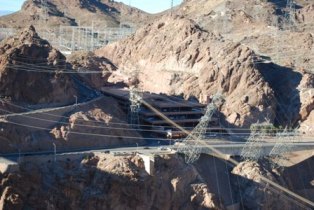 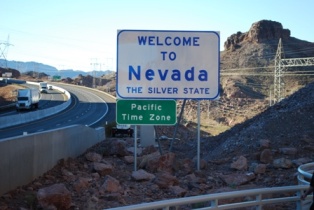 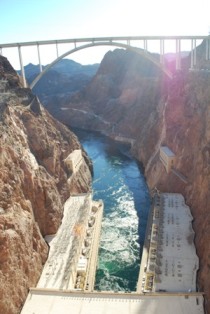 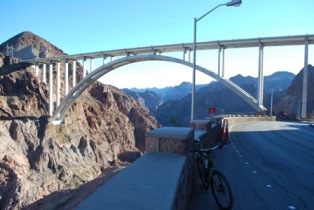 In conclusion, I now highly endorse the Hoover dam as a tourist activity if you're in Vegas. As long as you're going there, allow an extra hour to walk the bridge. You'll be glad you did.

A friend of mine, Chris M., works for a local tour company that leads private tours to Hoover Dam. He was very helpful with information I weaved into my article. Here are some additional comments he made, that I'll leave in his own words. Based on what he wrote, I evidently hit the bridge on a good day. Chris invites you to check out his own bridge pictures.

The parking to walk across the bridge is not big enough to handle the volume it will receive. There are no facilities there because authorities do not intend for people to enjoy the views for long. There is also no special parking for large vehicles such as RVs. The parking lot will fill up often by late morning and early afternoon. The best time to visit will be early morning or late afternoon. Lots of people park along the dirt next to the road near the paved parking area, but I am unsure if that is an issue or not. I've only been on two Dam tours since the bypass opened so I haven't figured out a pattern. The idea of parking in the dirt lots across the street is fine except keep in mind police and construction equipment use that area sometimes. Also, the dirt lots are meant as overflow parking for tour buses when the appropriate area for them in the parking garage is full. I imagine during holidays, there will be a big problem for anyone to park in the walkway parking area and the dirt lots after about 10 am until 4 pm. Also, the free lots on the other side of the Dam (AZ side) are available for free (except the one just after the Dam on the AZ side which is also $7 fee to park). The other lots are free simply requiring you to walk further. There are limited spaces which fill up on busy times.

I'd like to thanks Kristi M. for her proofreading help with this article, and husband Chris M. for providing informative facts about the bridge I didn't know.