We are now going to look at the High Noon Casino New Member Bonus and determine whether or not it is beatable.  Before we do that, however, we should take this opportunity to say that High Noon Casino is a Wizard of Odds APPROVED casino.

What that means is that, in the event of a dispute with the player and the casino, if no amicable resolution can be reached, the Wizard himself will step in on the player's behalf if the player signed up through the Wizard of Odds site. 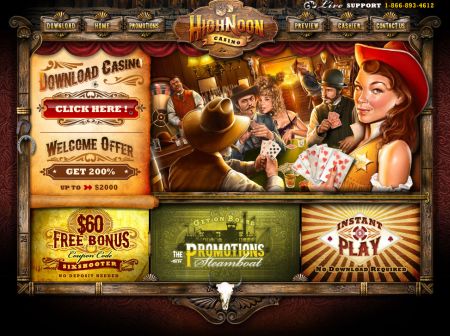 The first promotion we are going to look at is the, "SIXSHOOTER," promotion, which couldn't be more straight forward.  It is a $60 No-Deposit Bonus with a 50x playthrough requirement ($3000) that can be used on Slots, Keno or Scratch Cards only).

The Bonus itself is a Phantom Bonus which means that $60 would be removed from the player's account upon a withdrawal request, and if the player uses this bonus without first making a deposit, then a deposit must be made in order to cash out.

The goal for playing this promotion is actually very simple, the player should try to get to a point where he/she has enough money to cover the Expected Loss on the rest of the Wagering Requirement and still have roughly $360 left over after so doing.  While some of the slot games might be better for these purposes than Keno, in terms of Expected Loss, there's really no way to know that for sure and it also might be difficult to go for a win of a specific amount.

The problem with adding another $150 to that sum is that it puts you considerably over $300 at the end, in terms of expectation, so that's kind of a wasted win.

The probability of hitting that result is:

Therefore, the probability of you hitting within 19.53 spins is:

To do a binomial distribution roughly agrees with my results.

Personally, I like this.  You're looking at a probability of about 5.816% to win an amount between $215.40 and $270.40, while risking nothing.  That's essentially an Expected win amount of $12.53 to $15.73, so I personally think this is a pretty good little value play.  As I've said before, it's not like you can lose when you're not actually betting anything or making a deposit until you've already won.

I don't usually do this, but I can't help but feel compelled to say a couple of other words about this casino.  If there's one thing that I like, it is a No-Deposit Bonus, but this casino is packing a lot more than just that.  This casino offers daily promotions that can be redeemed differing numbers of times after the No-Deposit Bonus has been used.

On Mondays, the player can get a 70% Bonus on, "Other Games," with a 25x playthrough.  However, the playthrough is actually more than that depending on the game.

On Tuesdays, the player can make a deposit and receive a 20% Loss Rebate on all net losses with only a 2x Wagering Requirement.  The rebate can be up to $1,000 and the Maximum cash out is 10x the bonus amount.  In other words, if you lost $1,000 and got the $200 Bonus, then the playthrough would only be $400 and the player could win up to $2,000 for a profit of up to $1,000.  My next article is actually going to focus on taking advantage of this promotion.

On Wednesdays, players may claim a 65% Match Bonus that can be used on all games with a 25x playthrough.

On Fridays, the player may redeem a 67% Bonus on deposits with a 25x playthrough.

On Sundays, it's a 77% Bonus, but it's only on Keno, Scratch Cards and Slots.