How to calculate Florida Scratch-off ticket value from their new website.

We can now figure out how much money a Florida Scratch-off ticket is worth.

Thanks to Florida Lottery’s new website, we can now figure out how much money each Florida Scratch-off ticket is worth. They now publish remaining prizes for each scratchoff.

Since there are fewer overall tickets remaining but all of the grand prizes still remain, then the odds of getting a grand prize are higher now than they actually should be!

That’s still not very likely! But, if you’re going to be playing scratchers anyways, you might as well do everything you can to maximize your odds of hitting it big!

The math I just showed you lets you quickly and easily figure out which games have grand prizes that are more/less likely. But determining the exact value of a scratch ticket is a little more difficult.

If you do that for each prize, you should get about $22,680,000. (Again… that’s the value I’m getting at the time of this writing. You will get something else, but the idea is the same.)

Some other tickets are worse. Some are better.

[Edit by Mod: Thanks for the explanation, but promoting your website here is spam]

There's a lawsuit going on in Texas right now. Players are claiming that the rules of the Fun 5 game were unclear and they should be receiving payouts which the state is denying.

The lawsuit is a little interesting. But the documents that have been released as part of the discovery process is what I find most exciting.

Check out the game parameters that are part of the contract that the state has with GTECH, the company contracted to print the tickets.

No consecutive string of non-winning tickets will be greater than <redacted> which is 2 times the overall odds for this game rounded to the nearest whole number.

The overall odds for the game have already been published so it's easy to deduce the number that was redacted. Now we know that lottery retailers can wait until they see ~6 tickets in a row sold as losers and they are guaranteed to have a winner next in line. 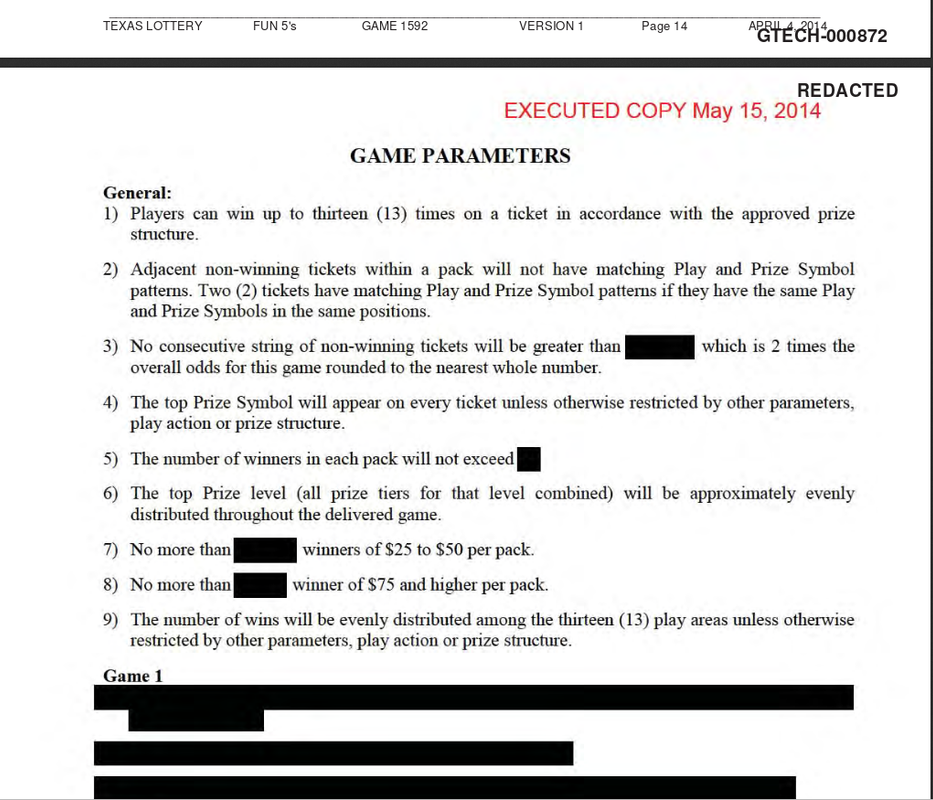 Woah at item 3. That blows random out of the water completely and would allow store staff or other vultures an enormous advantage.

Is this game still available?

There were a few WV Lottery games kind of like this several years ago. I worked in a, “Smoke Shop,” part of a grocery store that sold them.

The problems were identifying which scratchers for which this no more than x consecutive losers was the case, then there’s actually the matter of being present for that number to be sold AND scratched in front of you. Any ticket that leaves without a known result screws the pooch and restarts the count.

Even if you information traded with a co-worker, you would go most days (just speaking to this ONE store) without the target number of that particular scratcher even being sold, much less having the results revealed. For my part, I got to buy maybe one guaranteed winner a month and most of those were breakeven prizes.

Texas is retarded when it comes to gambling laws.

I think they can be beat even by people who don't work at a retailer. [Link redacted my moderator]

At the very least, you can increase your odds by only buying from new packs and then stopping once you get a prize over a certain amount. Or if the first few are losers, continuing to buy until you get a winner since you know each consecutive ticket is more likely to be a winner.