I just put up an first draft of a page on Quantum Blackjack. If my understanding of the rules is correct, this would be one of the most difficult games to analyze I've ever seen. Briefly, the game affords the player to win multipliers if he matches any of one to three random cards from a separate deck. This is paid for by a rule where if the dealer busts with 3 cards, standing bets automatically push. Please click the link for more details.

The question for the poll is would you play Quantum Blackjack? 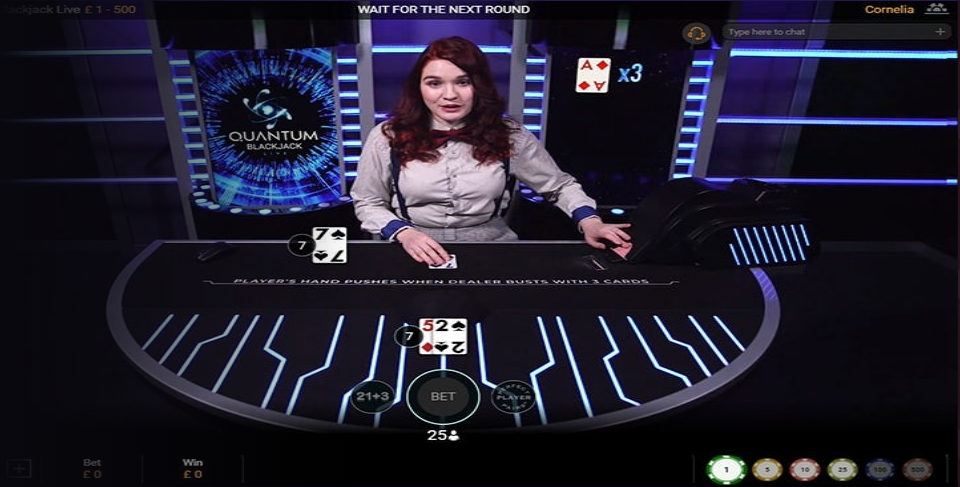 It's not whether you win or lose; it's whether or not you had a good bet.
ksdjdj

Reason, on the "Sporting Bet rules" page it says (see below):

"Rules
Multiplier cards
... Note that if you have two (2) or more identical cards in your hand that match the suit and value of one multiplier card, you are awarded the corresponding multiplier ONLY ONCE..."

Note: The game is "so new", that they may have changed/tweaked the rule(s) in the week or so that it has been available ?

Hope this helps, as I understand the WoO page is a "first draft" at the moment.

----
Also, I voted "maybe" when asked if I would play the game.
It looks fun, but I only like to play BJ If I know the basic strategy, and you said the BS is very complex.

There is at least one thing to dislike about it too: see the "push on three card dealer bust" rule that you mention (but this is the main (or only?) thing they decided to "take away" to pay for the "benefit(s)").

The game would probably be a better one for the "counter" than regular BJ, if they knew the correct strategy, but I think it is ALWAYS dealt out of a machine "that is shuffled every round?" (at this point in time, at least)

Just out of curiosity, what are some hands*** that you would hit (instead of double) if this was a "standard BJ game" that had the "3 card dealer bust is a push" rule?
***: I can already guess that you probably wouldn't double much against a dealer 8 to 10, so I am more interested in the 2 to 6 dealer up card scenarios.
Last edited by: ksdjdj on Dec 17, 2019
Wizard
Administrator

You're right, thanks for bringing that to my attention. I am trying to take a side between the SportingBet rules and those by the Casino Comparer, going with SportingBet. I agree there was probably a rule change somewhere.

Just out of curiosity, what are some hands*** that you would hit (instead of double) if this was a "standard BJ game" that had the "3 card dealer bust is a push" rule?
***: I can already guess that you probably wouldn't double much against a dealer 8 to 10, so I am more interested in the 2 to 6 dealer up card scenarios.

I would have to list this as one of the most difficult games to analyze I've ever seen. Up there with Lunar Poker and Klondike Solitaire. Personally, I would have to go by educated guesses, like hit 12 vs 4 or 6, 13 vs 2. If I could actually play the game I might be able to feel out strategy better.
It's not whether you win or lose; it's whether or not you had a good bet.
michael99000

Should the word “will” be “win”?
gordonm888
Administrator

I imagine that almost 12% of the time one of the multiplier cards will be in the first two 2 player cards. That might be exciting.

This game is such a radical departure from any existing game, it may be hard for players to learn and accept it.
So many better men, a few of them friends, are dead. And a thousand thousand slimy things live on, and so do I.
Wizard
Administrator

I think there’s a typo in step 8

I imagine that almost 12% of the time one of the multiplier cards will be in the first two 2 player cards. That might be exciting.

This game is such a radical departure from any existing game, it may be hard for players to learn and accept it.

Good point about considering the specific Multiplier cards. Yet another reason the analysis would be complicated and any strategy very difficult to quantify. All due points for creativity to Playtech, but I think it's too far out in left field to make it.
It's not whether you win or lose; it's whether or not you had a good bet.
charliepatrick

charliepatrick
Joined: Jun 17, 2011
It sounds an interesting idea to take something (Bust with 3-cards) and make some hands (with multipliers) exciting. However before one could even begin to analyse the game one needs to know the exact rules and probabilities of the bonus cards.

I haven't read the rules so my guess would be the bonus pack of cards (one deck) has multiplier values on every card and randomly (is it Pr=1/3) one, two or three of these are chosen. If any (one or more) of your cards match a bonus card then you receive that card's bonus. If more than one bonus card is matched then all bonus cards take effect. Where a hand has been split each hand can be considered for any bonus and is evaluated independently. When a hand is doubled the rules are slightly ambigous, I think the bonus only applies to the "initial" "main" bet. When the hand is a Blackjack any bonus applied to the total return of 2.5 units.

Each bonus card has (i) a Suit (ii) a Rank and (iii) a multipier (x3, x5, x10). Where only one bonus is payable the return, including initial wager(s), is multiplied; for example "x3" actually means the same as pay out double (i.e. 3-1=2 ). Where several bonuses are payable the return of all the bonus multipliers are multipled together and then applied as above (i.e. "x3" "x5 actually means pay out 14x (i.e. 3x5-1 = 14). (For some technical reason the rules say the initial bet is taken and the enhanced payout made.) It is possible to have the same multiplier on all three bonus cards, so possible to have a payout of 999 to 1 for a regular hand or 99 to 1 for a Blackjack.

Of course if the details are that the multipliers are assigned randomly to the bonus pack, then the mathematics starts to be really complicated!
ksdjdj

ksdjdj
Joined: Oct 20, 2013
I think that even though working out the "overall strategy" for this game is complex, you could treat it as two games and start with a "basic strategy " for the "main game"***.

***: I am treating the "main game basic strategy" as "how you should play the game, if you DID NOT have the bonus(es) to worry about" (see example of "player 10 vs dealer 6" below).

I won't work out the whole "main game basic strategy", there are at least two reasons why I don't want to do it (see below).
1. I am using "infinite deck" for the "player total", to work out the above "$ EVs" (so my figure will be out slightly).
2. It takes me about 15+ minutes to analyze each "two card player total, and dealer up card" (since I don't have a "specialized program/spreadsheet", I have to do each hand from "scratch").

After the "main game strategy" is complete, you can possibly start on the "way more" complex "bonus card strategy"

Do you think it is worth working out the strategy this way (or similar) for this game?
Last edited by: ksdjdj on Dec 18, 2019
ksdjdj

ksdjdj
Joined: Oct 20, 2013
Does Playtech still use "Playtech Peek", where both split bets are lost against a dealer BJ?

The reason why I ask is, it doesn't tell me in the game rules on the "sporting bet" site what happens with splits against an A or 10 (as far as I can see).

Note: this is only correct if you have zero bonus cards in your hand (I haven't checked what you should do if you had at least one bonus card).
Last edited by: ksdjdj on Dec 18, 2019
Gialmere