Speaking of writing, it's been said that Capote wrote the first non-fiction novel with "In Cold Blood". To be honest, I had no idea that novels were overwhelmingly fiction. I only learned this a couple years ago.

In my bookbase, I distinguish ‘historical novels’ from ‘novelized history’. Both are novels in a sense, and both mix fiction and nonfiction. Today, strict borders don’t exist anymore. Idem for classifying theatre plays. Comedy? Drama?
Reperiet qui quaesiverit
vegas

vegas
Joined: Apr 27, 2012
I have been reading all the Lee Child Jack Reacher books. Also like to read anything John Grisham writes. These type of series have basically the same theme but I just enjoy them.
50-50-90 Rule: Anytime you have a 50-50 chance of getting something right, there is a 90% probability you'll get it wrong
beachbumbabs
Administrator

A woman loaned me the first Stephen
King book I read. Can't believe it took
me till I was 40 to discover one of the
best writers of our time. Some of his
stuff stays with you for years. Like
Salem's Lot and The Stand and the
Dark Tower Series.

I read Carrie (for the first time) while we were up north for my Grandma's funeral in 1974. Think it was the year it came out in paperback. Not too many people remember where they were when they first read an author, but he's that good. So I guess it's 45 years he's been putting out good to great books, with the first dozen all great.

I'm wondering if you've read The Stand Uncut in those re-reads, or.you're sticking to the edited (original) version. Paid full price for the Uncut hardback so I'd have it in my library. Again, pretty unusual for me.

I probably read 2 a week. But I don't like having several going at the same time. I just always have one nearby.
If the House lost every hand, they wouldn't deal the game.
beachbumbabs
Administrator

I have been reading all the Lee Child Jack Reacher books. Also like to read anything John Grisham writes. These type of series have basically the same theme but I just enjoy them.

For living authors, everything and anything by these novelists is worth reading :

My big 3, for whom I own a copy of everything they ever wrote, but they have passed on.

Long list of people whom I will read, but not always recommend. A few:

My library was about 8000 books, but I donated a couple thousand to a new library in my town, so it's down some. About 500 reference books, the rest fiction, maybe 200 or so non-fiction & non-reference.
If the House lost every hand, they wouldn't deal the game.
EvenBob


I've only ever read the uncut version.
"It's not enough to succeed, your friends must fail." Gore Vidal
EvenBob


You'd absolutely love the Flasman series
by George McDonald Fraser. Best historical
fiction ever written. He writes about a
coward/hero in the early days of queen
Victoria's reign. His research is flawless,
you can read his books as actual history.
Just read the first one, I guarantee you'll
be hooked. 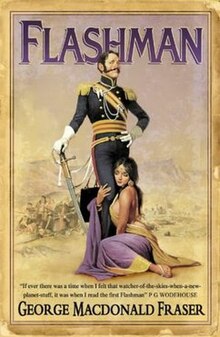 "It's not enough to succeed, your friends must fail." Gore Vidal
gordonm888

I've read most of Stephen King. I've read a lot of Patricia Cornwall.

I just finished these incredibly different books:
In Defense of Food by Michael Pollan
A Walk in the Hindu Kush by Eric Newby (1958, humorous account of exploration in Afghanistan)
Quantum Philosophy by a french physicist, Roland Omnes (very learned history of philosophy, logic, mathematics and quantum physics)
Civilization of the Middle Ages by Norman Cantor (took me several years but incredibly rewarding)
Snow on the Equator by H. W. Tilman (1937, mountaineering in Africa, rode across Africa on a bicycle)
All the Light We Cannot See (2015 Pulitzer Prize for Fiction) - stunning novel

BTW, I have read 2 of the Flashman series. Fun reading. I love British humor.
Last edited by: gordonm888 on Aug 2, 2019
So many better men, a few of them friends, were dead. And a thousand thousand slimy things lived on, and so did I.
redietz

redietz
Joined: Jun 5, 2019
A kindred spirit. Not counting my comics, I had about 3,000 pounds of books (not sure about book count, just weight). My girlfriend finally got me to sell or donate, mainly donate, about 1000 pounds of them. About 90% of mine are non-fiction.

Here's two beauties you have to read:

1) The Death of Expertise by Tom Nichols.
2) The Self Illusion by Bruce Hood.
"You can't breathe dead hippo waking, sleeping, and eating, and at the same time keep your precarious grip on existence."
EvenBob

I've only ever read the uncut version.

Speaking of that. The orig was 1100 pages
and the publisher wanted 400 pages cut.
So King had to go thru paragraph by
paragraph and pare it down. Had to take
him months of basically busywork.
"It's not enough to succeed, your friends must fail." Gore Vidal
EvenBob

I've read most of Stephen King. .

I'm still ticked off at King for
how he ended the gunslinger
series. We waited years for
it and it's like he dashed it
off in an afternoon. Fans
really let him have it in the
reviews.
"It's not enough to succeed, your friends must fail." Gore Vidal
RSS Feed