EvenBob
Joined: Jul 18, 2010
This is how clove vodka starts out and what it
looks like when you're done. Throw in a cinnamon
stick too and its really delightful. 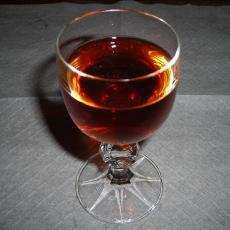 "It's not enough to succeed, your friends must fail." Gore Vidal
kewlj

kewlj
Joined: Apr 17, 2012
I ended my year as far as playing blackjack yesterday and quite a nice year it was. Christmas week isn't the greatest week for playing because the tables and casinos are really crowded with all those folk just itching to spend that Christmas money. lol

My younger brother is coming in today to visit for 10 days, I so I am just going to relax and spend time with him and a few friends over the next 10 days, showing him around Vegas and Nevada and nearby destinations such as the grand canyon. It will be a nice break. I am not even going to think about blackjack or casinos except when we are eating in the restaurants, which I do everyday. lol

As far as drinking, I pretty much gave up drinking last fall while recovering from valve replacement surgery. The antibiotic regiment that I was placed on was not a good mix with alcohol, so that was the time to quit. Now that I can drink again, I really don't drink too much. Not the clubbing booze hound I was just a couple years ago. But, with my brother in town, I am sure we will be hitting the clubs and I am planning on throwing a few back. :)

Happy Holidays to everyone and I hope everyone is able to relax and share quality time with friends and family over the holidays.
EvenBob

Sonuvagun Bob, that sounds good. I've laid up a supply of strong ale myself. Strong Christmas ale, some mulled pears, and good friends and family. Can't beat it. "It's not enough to succeed, your friends must fail." Gore Vidal
tringlomane
tringlomane
Joined: Aug 25, 2012
That looks really delicious. I wonder if it made it to the snooty beer stores in St. Louis...

Only 5.5% ABV though? Weaker than I expected...
winmonkeyspit3

Guess I'm a little late for this, but...

Actually it's the feast of Sol Invictus. Literally it means "the undefeated Sun."

Winter festivals were common among all ancient human societies. They still are, but for a different reason. In ancient times you had a harvest on the one hand, and the need to slaughter what cattle and work animals couldn't be kept alive (ie fed) through winter. So there was plentiful food. At the same time, farms lay largely idle.

So, you have combination of free time and lots of food. Ergo let's party.

Add the winter solstice, when the nights begin to get shorter and the days longer, and you have symbolism, too. It's no coincidence.

Now, if you worship the Sun, or have a Sun god, this is the ideal time to celebrate, too.

You can listen to the explanation here: http://traffic.libsyn.com/historyofrome/18-_A_History_of_Rome_Christmas.mp3
Donald Trump is a fucking criminal
EvenBob

EvenBob
Joined: Jul 18, 2010
We're having what I call a 'Hogan's Heroes Christmas' in
W MI this year. We have the lightest dusting of snow on
the ground, about as much snow as you ever saw in an
episode of Hogan's Heroes.

That show was on for 6 seasons, and its always winter in
every season. Thats because the historical context of the
show is the winter of 1941-42 and it never moved from
that. It was an Air Force prison camp, thats why they
were all pilots and airmen. We had been bombing Germany
right along with the RAF before we declared war on Germany
in Dec 1941, and thats all we had over there, AF POW's.

Thats why Shultz is always in his greatcoat and Klink put on his
heavy coat everytime he went outside. "It's not enough to succeed, your friends must fail." Gore Vidal
RaleighCraps

RaleighCraps
Joined: Feb 20, 2010
Not many of that cast are still alive.
From memory, so some spellings may be wrong....

And I think both the General and the Gestapo major died too.
Always borrow money from a pessimist; They don't expect to get paid back ! Be yourself and speak your thoughts. Those who matter won't mind, and those that mind, don't matter!
EvenBob

Not many of that cast are still alive.
.

If you like trivia, most people have no idea about
these facts:

"The actors who played the four major German roles—Werner Klemperer (Klink), John Banner (Schultz), Leon Askin (Burkhalter), and Howard Caine (Hochstetter)—were Jewish. Furthermore, Klemperer, Banner, Askin, and Robert Clary (LeBeau) were Jews who had fled the Nazis during World War II. Clary says in the recorded commentary on the DVD version of episode "Art for Hogan's Sake" that he spent three years in a concentration camp, that his parents and other family members were killed there, and that he has an identity tattoo from the camp on his arm ("A-5714"). Likewise John Banner had been held in a (pre-war) concentration camp and his family was killed during the war. Leon Askin was also in a pre-war French internment camp and his parents were killed at Treblinka. Howard Caine (Hochstetter), who was also Jewish (his birth name was Cohen), was American, and Jewish actors Harold Gould and Harold J. Stone played German generals."

Robert Clary, who played the little French guy, spent
3 years in a German concentration camp and saw his
parents killed there? Incredible.
"It's not enough to succeed, your friends must fail." Gore Vidal
RSS Feed