Don't try to shake it. You're absoltely right.

I think he knows it was, but his point was the seeming ambivalence.
1BB

1BB
Joined: Oct 10, 2011
Niblick, your post reminded me of a Billy Joel song.
Many people, especially ignorant people, want to punish you for speaking the truth. - Mahatma Ghandi
SanchoPanza

I was taken by the amount of table games in play. It seemed that one could combine Harrington, Dover, Mount Airy and still not come with what I saw at Sands.

In view of the confiscatory tax rate on slots, that is more than understandable.
Niblick

Did you notice that orange ring around the bad in the middle of the casino?

It's a huge coil of steel that they found on the site. The bar is called "Coil."

DJTB, interesting...I saw it and took note but didn't associate it with anything.

Thanks for the info. Do you have any other nuggets like that regarding the Sands? There has to be some kind of story behind the sign...
Nemo Omnibus Horis Sapit
SanchoPanza

There was no building where the casino now stands. It was a giant ore pit.

Adelson sure took down a lot of other buildings:

"BETHLEHEM, Pa. (AP) — A sprawling 130-year-old steel plant that armored hundreds of U.S. warships and provided the raw material for the Golden Gate Bridge, Madison Square Garden and many other famous landmarks will become a hive of activity over the next few days as workers start preparing some of its buildings for demolition.

More than a decade after its towering blast furnaces went cold, Bethlehem Steel's flagship plant is being transformed into a $600 million casino complex run by Las Vegas Sands Corp., owner of the Venetian Resort Hotel Casino in Las Vegas. Contractor Brandenburg Industrial Service Co. will take down 11 buildings representing about 460,000 square feet, including a locomotive repair shop and steel foundry.

Though historians and former steelworkers lament the loss of a part of Bethlehem Steel's history, Sands said it will save more than 20 buildings — including the 1,500-foot-long No. 2 Machine Shop, once the world's largest — and incorporate many of them into a resort featuring a hotel, restaurants, shops, entertainment venues and the slots casino.

Also staying put are the iconic, 20-story blast furnaces that have helped define Bethlehem's skyline for 100 years. . . . Actual demolition won't start until early June. Workers must first clean up the site and remove important artifacts — including a 60-foot-long, 187,000-pound gun from the USS Mississippi, a battleship that saw action during World War II. A fire truck, a diesel locomotive and the last piece of armor plate made in the United States also will be removed and stored for future display.--usatoday
pacomartin

Contractor Brandenburg Industrial Service Co. will take down 11 buildings representing about 460,000 square feet, including a locomotive repair shop and steel foundry.Though historians and former steelworkers lament the loss of a part of Bethlehem Steel's history, Sands said it will save more than 20 buildings — including the 1,500-foot-long No. 2 Machine Shop, once the world's largest — and incorporate many of them into a resort featuring a hotel, restaurants, shops, entertainment venues and the slots casino.

The actual casino is on the ore-fields in the map below (dark brown). The locomotive repair shop was where the mall is now, and some of the other large buildings (like the steel foundry, no 2 treatment, and weldment department are now parking lots.

You are talking about some incredibly ugly buildings. The #2 Machine shop described in the article above, is literally crumbling. Although the machine shop was saved, no one can afford to try and renovate such a building. No old buildings are part of the casino/hotel/shopping mall complex as of today. It isn't like some of the industrial buildings in central London which were saved at huge cost. This is a very ugly brownfield site.

The blast furnaces have become a kind of strangely lit post apocalyptic structure, an homage to the industrial past. They were used as a setting for one of the Transformers movies.
DJTeddyBear

Do you have any other nuggets like that regarding the Sands? There has to be some kind of story behind the sign...

No. I don't remember where I learned that one. Paco might have more nuggets. Now that I think of it, I might have gotten that from Paco.
Superstitions are silly, childish, irrational rituals, born out of fear of the unknown. But how much does it cost to knock on wood? 😁 Note that the same could be said for Religion. I.E. Religion is nothing more than organized superstition. 🤗
pacomartin 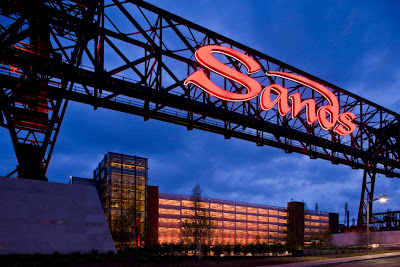 The sign was a derrick crane that used to work the ore pit.
Tiltpoul

The sign was a derrick crane that used to work the ore pit.

There is something about that Sands sign that gets me when I see it. Perhaps because it's really the last bit of Vegas still alive, albeit in PA. But think about it... Dunes, Sahara, Aladdin... they all had iconic fonts on their signs and they are all gone. Yeah, Flamingo still uses it's lettering, but it's not the same knowing the Evil Empire owns it.

Edit: I left the wrong pic up... oops.
"One out of every four people are [morons]"- Kyle, South Park
pacomartin

Bethlehem Steel was ranked #12 on the original Fortune 500 in 1955 (just behind CBS). BS stayed on the list for 48 years before selling off the remaining assets. They say that only 11 companies exist today that were on the original list.
RSS Feed