pacomartin
Joined: Jan 14, 2010
New Twin Tower Collapse Model Could Squash 9/11 Conspiracies has recently been circulating. The research investigator states My model explains all the observed features on 11th September: the explosions, molten metal coming out of the window, the time passing between the crash and the collapse, the fact that the explosions took place in a floor below the place it was burning, and the rapid collapse.... Simensen argues that molten aluminum from the airplane bodies chemically reacted with water in the buildings' sprinkler systems, setting off the explosions that felled the Twin Towers.

Since I worked with naval explosive design for many years, I thought I could add something to this discussion. Naval explosives are laced with as much aluminum as is absolutely possible without the material being inert. The motivation is to use the high heat of the explosion, mixed with the seawater, to create the largest gaseous explosion possible. Modern anti-ship torpedoes do not even touch a ship hull. They detonate beneath the hull using a non-impact fuse. By blowing a giant gaseous bubble directly under the ship keel, they use the weight of the ship to snap the spine of the ship, causing complete structural collapse.

Australian ship being deliberately destroyed by a torpedo 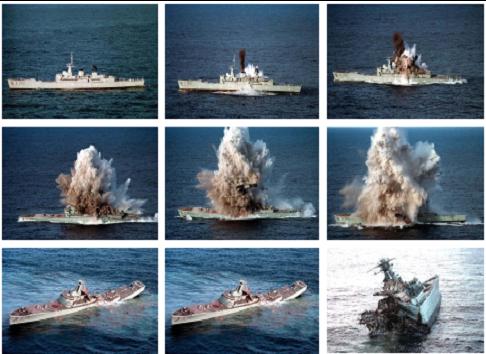 As more and more governments attempted to save money by building ships out of aluminum instead of steel, accidental phenomena involving aluminum began to surface. The 2010 accident involving the South Korean patrol boat Cheonan which caused the collapse of the hull and splitting the ship in two (46 men lost) also involved an aluminum reaction at high temperatures. In 1987 the USS Stark was struck by two Exocet missiles fired by the Iraqis. The aluminum ship developed a highly toxic gas which crippled rescue efforts. Most researchers take it for granted that the impact would have been much less severe on a steel ship. But that incident did not involve a keel collapse since the missiles struck well above the water line.

The Simensen theory seems plausible to me on first reading. I am used to thinking of Aluminum as a potentially dangerous material, while most people think that it is as harmless as dirt. To be honest, I am also very skeptical about conspiracy theories where the jets were just a cover for a pre-planned attack on the ground. In this case I think Occam's Razor is appropriate.
RaleighCraps

RaleighCraps
Joined: Feb 20, 2010
Thanks paco. That link was certainly an interesting read.
Always borrow money from a pessimist; They don't expect to get paid back ! Be yourself and speak your thoughts. Those who matter won't mind, and those that mind, don't matter!
Alan

Alan
Joined: Jun 14, 2011
Although my comments don't have anything to do with heat. Whether the hull is aluminum or steel over time with hogging and sagging the ships hull gets fatigued over time and I would venture to say that it would be more susceptible to breaking in half the older it gets. Aluminum fatigues faster than steel.
Nareed

The Simensen theory seems plausible to me on first reading. I am used to thinking of Aluminum as a potentially dangerous material, while most people think that it is as harmless as dirt.

Aluminum is one of those elements that is so reactive it seems inert, like nitrogen.

Plain burnished aluminum like you find in every day use looks inert because it doesn't tarnish like silver, for example. As a matter of fact, it's already reacted with oxygen, forming an aluminum oxide layer on every surface exposed to the air. Aluminum oxide (Al2O2) is better known as sapphire, which unlike other metal oxides is rather strong. The thin coating is almost transparent, too, and quite stable. So it makes the metal seem inert.

Nitrogen is much the same way. It's so reactive it reacts with itslef. Ergo you don't find single nitrogen atoms anywhere, but rather N2 molecules all over the place. N2 is very stable. So much so that it can be used to extinguish fires.

Oxygen also reacts with itself to form an O2 molecule, but that one isn't nearly as stable. It will readily react with other elements, such as aluminum, iron, etc.

Back to Aluminum, in solid rocket fuel and explosives, it's used in powdered form, etiher pure or in compunds. This increases the surface area of the metal and lets it burn much faster than it would otherwise.

In solid forma t normal temperature ranges and with its coating of aluminum oxide, though, the metal is strong and light-weight. it's used extensively in aircraft frames, though cmposites are gaining there, and in the monoblock of internal combustion engines.

And it won't affect conspiracy theorists even a little bit.
Donald Trump is a fucking criminal
Doc

Did you make an error in your links for the photos or perhaps in formatting your post? The nine photos (of the Australian ship destroyed by a torpedo) and the ten photos (of the Korean patrol boat accident with no torpedo) have such extreme similarity that I am convinced that many, but not all, of the photos are duplicates between the two sets. Perhaps the second set is also the Australian ship, while your link for the Korean patrol boat did not work properly.
RSS Feed