I spelled his first name wrong - it's actually Alec

.
Last edited by: lilredrooster on Jan 20, 2023
"believe half of what you see and none of what you hear" - Edgar Allan Poe
AZDuffman

AZDuffman
Joined: Nov 2, 2009
A bit of a tough one. On one hand he is an actor and should assume there was no a live round in the gun. The prop person should also be charged with perhaps criminally negligent homicide. OTOH, he pulled the trigger. He is no different than if some kind of plat manager who deliberately makes an unsafe working condition.
All animals are equal, but some are more equal than others
rawtuff

rawtuff
Joined: Mar 15, 2013
I believe in addition to starring in Baldwin was also a (one of the)producer(s) of the movie. That might play a role.
Tits are good, but the most important thing is the soul.
ChumpChange

Where's Columbo? I'm sure he has just one more question.
darkoz

The prosecutor relies on safety issues. From the specifics it appears the set armourer didn't know live bullets were on set because they had mistakenly been mixed in with dummy rounds from the manufacturer. This is most likely the fatal flaw in the prosecution.

There was a pretty good analysis of the Brandon Lee death which was similar. From that case:

Dummy rounds used on film sets are purchased especially from manufacturers. The bullets are often REAL however they have had the gunpowder removed. Firing a dummy bullet within inches of an actor can still kill him and in fact one actor who didn't realize this killed himself when he fired a blank into his own skull a as a prop joke on set https://en.m.wikipedia.org/wiki/Jon-Erik_Hexum.

In the Brandon Lee example, the film set discovered they didn't have the proper dummy rounds so the props armourer hollowed out real bullets of their gunpowder so they could shoot the scene. But there was enough residue left in one bullet to propel it into Brandon Lee.

That case seems to fit the prosecutor argument that the set didn't follow safety protocols although the actor who shot Lee still would have had no idea the bullet was real or have any expert knowledge on how to tell(would you be able to tell?)

Here it appears there was an expectation that the manufacturer had supplied properly hollowed out dummy bullets.

Imagine if you handed your kid some candy and then he died from poisoning. The manufacturer had made the mistake of mixing in toxic chemicals. And the DA said you were guilty of involuntary manslaughter because you handed the poison candy to your child. If that sounds ridiculous well that's pretty much the situation we have here
For Whom the bus tolls; The bus tolls for thee
unJon

Maybe the prosecution theory is that the armorer should have caught that real bullets and dummies were mixed together.

Maybe the theory on Alec is not that he shot the gun, but that as head producer he was responsible for the safety procedures, so was negligent as well.

My guess is that this will all turn on the “due caution and circumspection” part.

I’m not saying I agree with any of this, just that I don’t have a view yet as I don’t know enough about the investigation results of the theory of the prosecutor’s case.

I do find it interesting that one of the folk has agreed to a guilty plea, and is presumably going to testify to something.
The race is not always to the swift, nor the battle to the strong; but that is the way to bet.
lilredrooster


I think the Prosecutor is playing to the crowd

rxwine
Joined: Feb 28, 2010
Part of the problem is the armorer procedures on a movie set seem to be closer to a pirate code than a requirement across the board. At least that's my impression.
Fair is fair, if unprovable claims are insisted to be true, one should be able to use unprovable methods of debunking.
darkoz

darkoz
Joined: Dec 22, 2009
As someone with film experience I understand how confusing the roles of different players are on a film set.

Alec Baldwin as producer. The producer is the guy who raises financing. Many producers don't even appear on set. Alec Baldwin wanted this show produced so he could have a plum role and was instrumental in raising the finances

Raising finances is almost never putting up the producers own money. Usually it means convincing the studio to invest. A producer doesn't own the film rights in this situation, the studio does.

As you can see it's not as simple as a store owners responsibility because he created his storefront.

The producer usually hires the Line producer. Line producer is in charge of everyday working on the sets. Scheduling, hires etc and would have been who probably hired the armourer

As noted someone has already copped a plea. That was the assistant director. The assistant director is the "tyrant" on set who screams at everyone to be prepared for each shot. His role is to make everyone be prepared simultaneously which is more difficult than it sounds. From temperamental actors, EFX crew having trouble with props, sound crews that can't get their mikes situated because the camera operator wants a crazy circular shot etc.

The assistant director was in charge of inspecting the prop gun for safety on the set. He apparently didn't check the gun properly and was also in charge during two other misfire incidents on this set so it's understandable he took a plea.

So who hired the assistant director? Usually it's the director and not the producer. Directors strike a repoir with AD's who keep their set running smoothly. And AD(Assistant Director) is the step before Director. Many of today's directors did their own stints as AD so they feel a certain camaraderie.

So who hired the director that hired the assistant director? Most likely the studio which would want confidence their money is in good hands

But you begin to see why simply pointing the finger at the producer because he sounds like he is in charge of the film is not the simple task it seems
For Whom the bus tolls; The bus tolls for thee
DJTeddyBear

DJTeddyBear
Joined: Nov 2, 2009
Even a complete novice can tell the difference between blanks and live ammo. 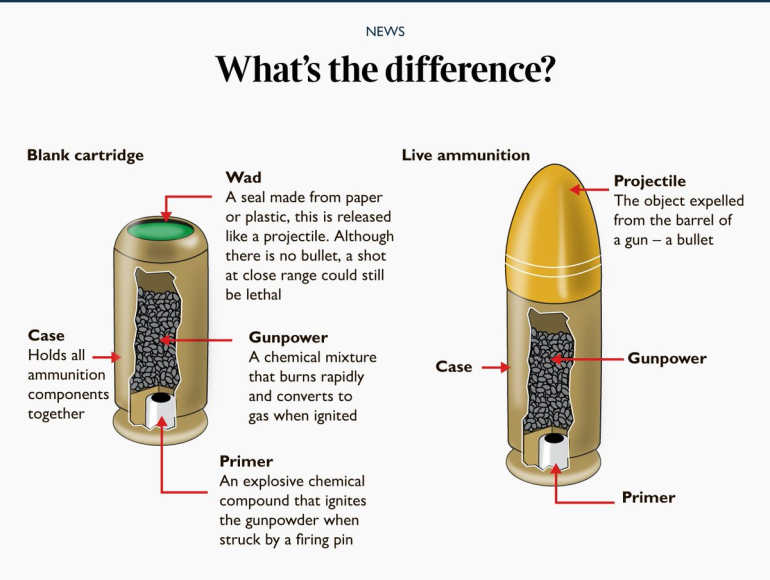 Some blanks instead have slightly longer cartridges which are crimped to kinda look like a bullet. But even those are hard to confuse with live rounds. 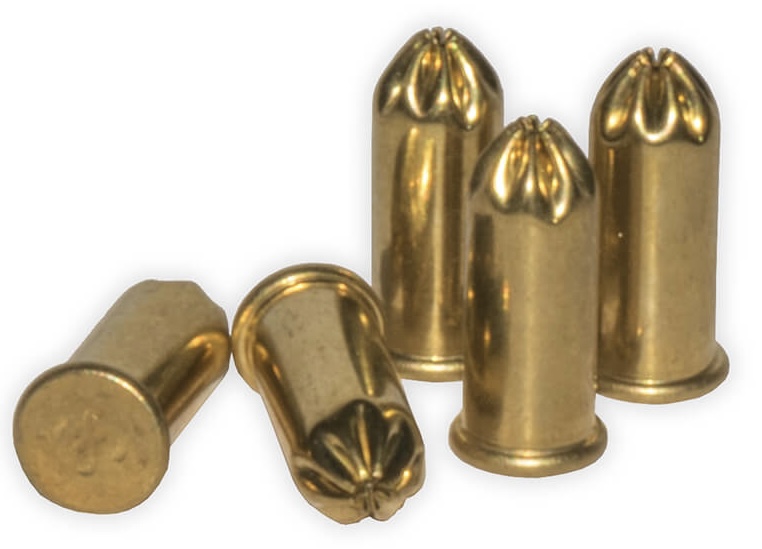