I have irrefutable proof of Kentry and Nathan being the same person!

I have unshakeable proof that Kentry and Nathan are the same person, so maybe posters can stop accusing me of being them.

There are multiple Exhibits that prove that they ate, in fact, one and the same.

Exhibit A [quote author="@kentry" source="/post/996454/thread" timestamp="1508578525"]I was temporarily banned from a website for mentioning twice how bad alimony is. A person started a thread where he said that he saw a guy trying to hide that he got a huge financial windfall and said he could have been trying to hide the windfall because he could have alimony payments. I said,"I've always hated the idea of alimony. Why should I have to give money to an ADULT I am no longer legally bonded to anymore?" Another person later mentioned alimony, and I replied,"Alimony sucks! It should be outlawed!" The Moderator said,"You have mentioned alimony twice in this thread that is about a guy trying to hide his windfall, not about alimony. You have been suspended for two weeks." I was shocked. Another poster said,"He was answering two posts from two separate people who talked about alimony. This two week ban is really unfair considering how innocent his responses really were." Still, the two week ban stuck. I couldn't believe my innocent responses got me banned for two weeks! That was messed up!

This is NATHAN'S responsse to someone here.

"Alimony is money you pay to an ex spouse that is court ordered. I always hated that. Why should I have to financially support an adult I am no longer legally bonded to? Child support payments are okay after divorce since you are still legally bonded to the child even after divorce but the adult you divorced, hell no. Especially if the ex spouse deserved the divorce by doing something really heinous like cheating. Why should I have to pay you for cheating on me? I love the idea of prenups. Once we are divorced I no longer have to financially support your adult ass with a prenup."

Exhibit C. A threads by Kentry asking if he should be a Moderator.

Kentry
More than one person has said they'd like to see me as a Moderator. I am flattered but personally think I don't have too much clout on this board as I am still relatively new on this board. I have only been on here for about 4 months. Who else thinks I would make a good Moderator?

Exhibit D
Here is Nathan's thread asking if she should be a Moderator.

Nathan. "I do remember someone nominating me for Moderator in a previous thread, and I responded something like, "I don't know how much pull I would have as a Moderator since I started off as kind of a joke last year and only became more mature recently."


Exhibit F
.
Here is a post that Nathan mentions about still being mad about the Alimony suspension thing. Compare this to the Kentry Quote way above.

Nathan wrote this. "I'm still bitter(Actually more like pissed off) to this very second about being suspended for two weeks for the Alimony thing. There was a guy that mentioned a guy in a Casino was trying to hide his Jackpot. One person replied ,"He could have been trying to hide his Jackpot because he could have Alimony payments. I don't even know what Alimony is, but it sounds awful." I responded,"Alimony is what you pay an ex spouse after divorce. I hate the idea of Alimony. Why should I have to support another adult that I am no longer legally bonded to? Especially if the reason for the divorce is because my ex spouse cheated on me? So I have to pay someone who cheated on me? Hell no!" . Another person after the person I answered mentioned not liking the idea of Alimony, and I said,"Alimony sucks! It should be outlawed!" So, I was helping one person out who said that they didn't know what Alimony was, but knew it sounded awful, and agreeing with another person who said they didn't like Alimony. I then saw a post saying,"You have mentioned Alimony twice in a thread about a guy that was trying to hide his Jackpot. You have been suspended for two weeks for hijacking." Other posters stood up for me saying I did not deserve a two week suspension (Especially since I was responding to other people who brought up Alimony first) but the suspension stuck for the whole two weeks. Why was I the only one suspended for the Alimony comments when I was responding to other people who brought it up first? I never got over that suspension. Still makes me so mad!"


In the legal system I work for, this would be really damning, irreputable evidence of Kentry and Nathan being the same person. Besides, I joined here roughly five months before Nathan was banned. So I'd have no reason to create a sock puppet five months before the main account was banned.
Last edited by: LusciousSweet2 on Jul 13, 2019
Here come the Men In Black. They won't let you remember.
OnceDear
Administrator

OnceDear
Joined: Jun 1, 2014
[Yawn]
Take care out there. Spare a thought for the newly poor who were happy in their world just a few days ago, but whose whole way of life just collapsed..
PokerGrinder

Walgreens has a legal system department?
You can shear a sheep a hundred times, but you can skin it only once. — Amarillo Slim Preston
bobbartop

Mod, I respectfully disagree. This is fascinating. I'm on the edge of my chair.
'Emergencies' have always been the pretext on which the safeguards of individual liberty have been eroded.
CrystalMath

If Nathan=some new Kentry, how does that imply Nathan isn’t Luscious.

Plus, it’s amazing that you know just where to find this “proof.”
I heart Crystal Math.
rsactuary

Plus, it’s amazing that you know just where to find this “proof.”

Truly amazing at this forum, given how primitive the search function is. I have a hard time finding my own posts.
I tell you it’s wonderful to be here, man. I don’t give a damn who wins or loses. It’s just wonderful to be here with you people.
MDawg

MDawg
Joined: Sep 27, 2018
For the Nathan trackers (not my bag, so I'll pass this along for your investigation), was Nathan's style to make some points, then skip several spaces (a big gap), and then throw out the summary conclusory paragraph? Somewhat like talk talk talk, then take a step back as if what she has to say is all important and needs some space to make the point properly, and then toss out the summation. That's a distinctive style of forum elocution.

I noticed it because I tend to use the same style (but I'm not Nathan). 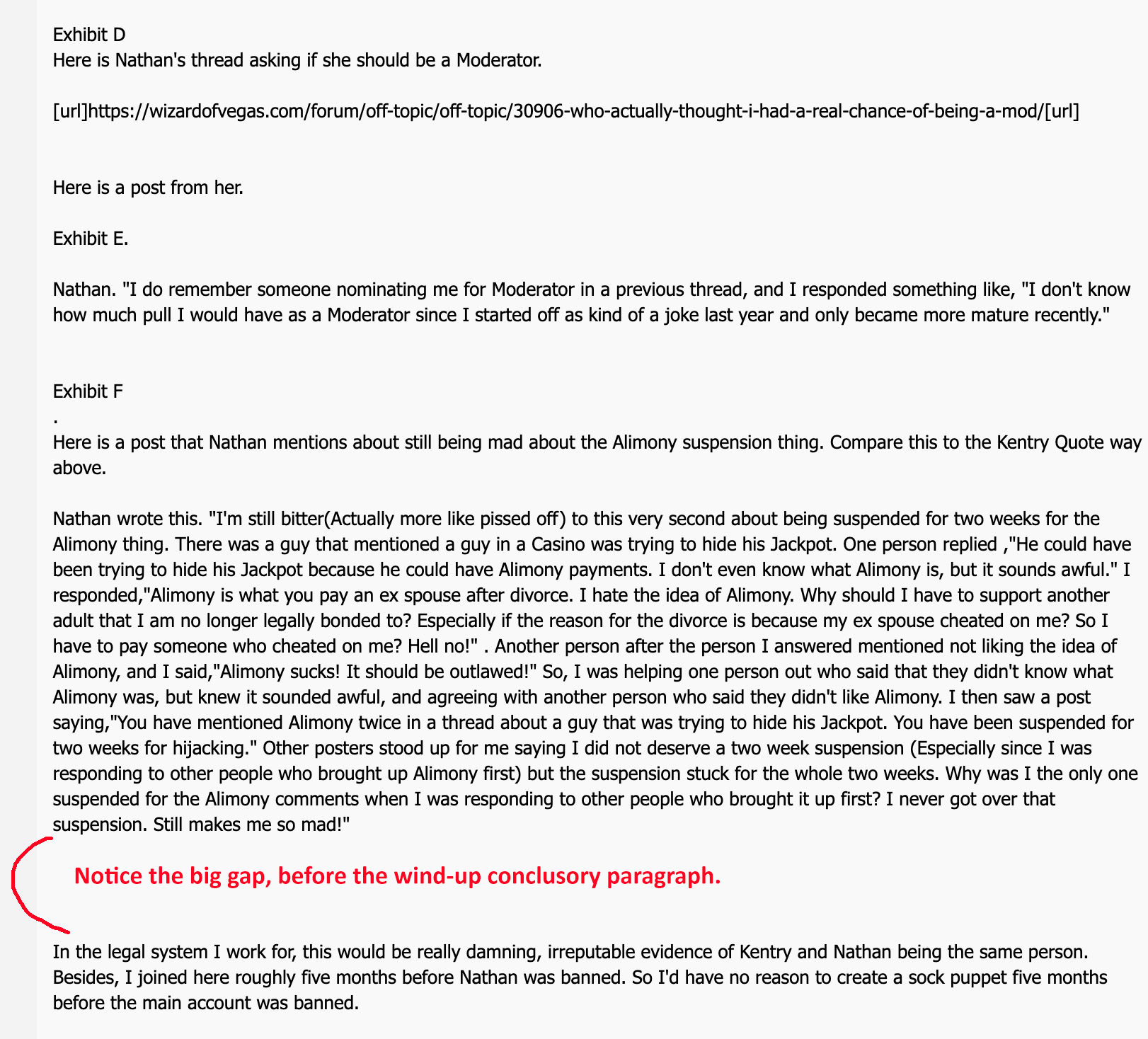 Truly amazing at this forum, given how primitive the search function is. I have a hard time finding my own posts.

One doesn't usually have to search for their own posts, unless of course, they need to keep their own stories straight (-;
♪♪Now you swear and kick and beg us That you're not a gamblin' man Then you find you're back in Vegas With a handle in your hand♪♪ Your black cards can make you money So you hide them when you're able In the land of casinos and money You must put them on the table♪♪ You go back Jack do it again roulette wheels turinin' 'round and 'round♪♪ You go back Jack do it again♪♪
Johnzimbo

Kentry and Nathan both six letters. It was obvious from the start.