Today’s chip of the day is from 101 Poker Richmond (sort of) in Houston, Texas. I visited this club last year when it was 52 Social before it was sold to a group with Johnny Chan as the face of the group. They renamed it Johnny Chan’s 88 Social and the club went downhill very quickly. Turns out the money behind the purchase didn’t actually have any money and very quickly they had trouble cashing out players. In early December they started limiting cash outs to $2000 a day which for obvious reasons made people stop wanting to play in a place with cash flow issues. Later that month after only 5 months as Johnny Chan’s they closed. A couple months later a man who was a regular at the 101 Poker in Katy (20 minutes away) bought Johnny’s and reopened it February 25 as 101 Poker Richmond. They are not connected but I assume he got the ok from 101 Katy’s owner to use the name. The club is on Richmond Ave thus the name.

When I went to 101 Richmond they had one game running and 40 or so empty tables, it was so sad. Apparently they have been struggling to get any traction in the “new” club. They hadn’t gotten their new chips yet (I wonder if they will bother) so I kept one from Johnny’s that they are still currently using. My plan is to use this as my 101 chip until I go back and grab a new chip but I honestly doubt I ever do. It will probably be a year before I’m back and I highly doubt that they will last that long.

The chip is one of the nicest and best quality, they really went all out. The chip is blue with 12 white edge inserts and 4 white lines between each set of 3 inserts. The centre inlay is shiny gold and black with “88” all over the background. The club name is in gold over the black and the rest is red and black over the gold in the centre. The denom is in the black section on the bottom in white. 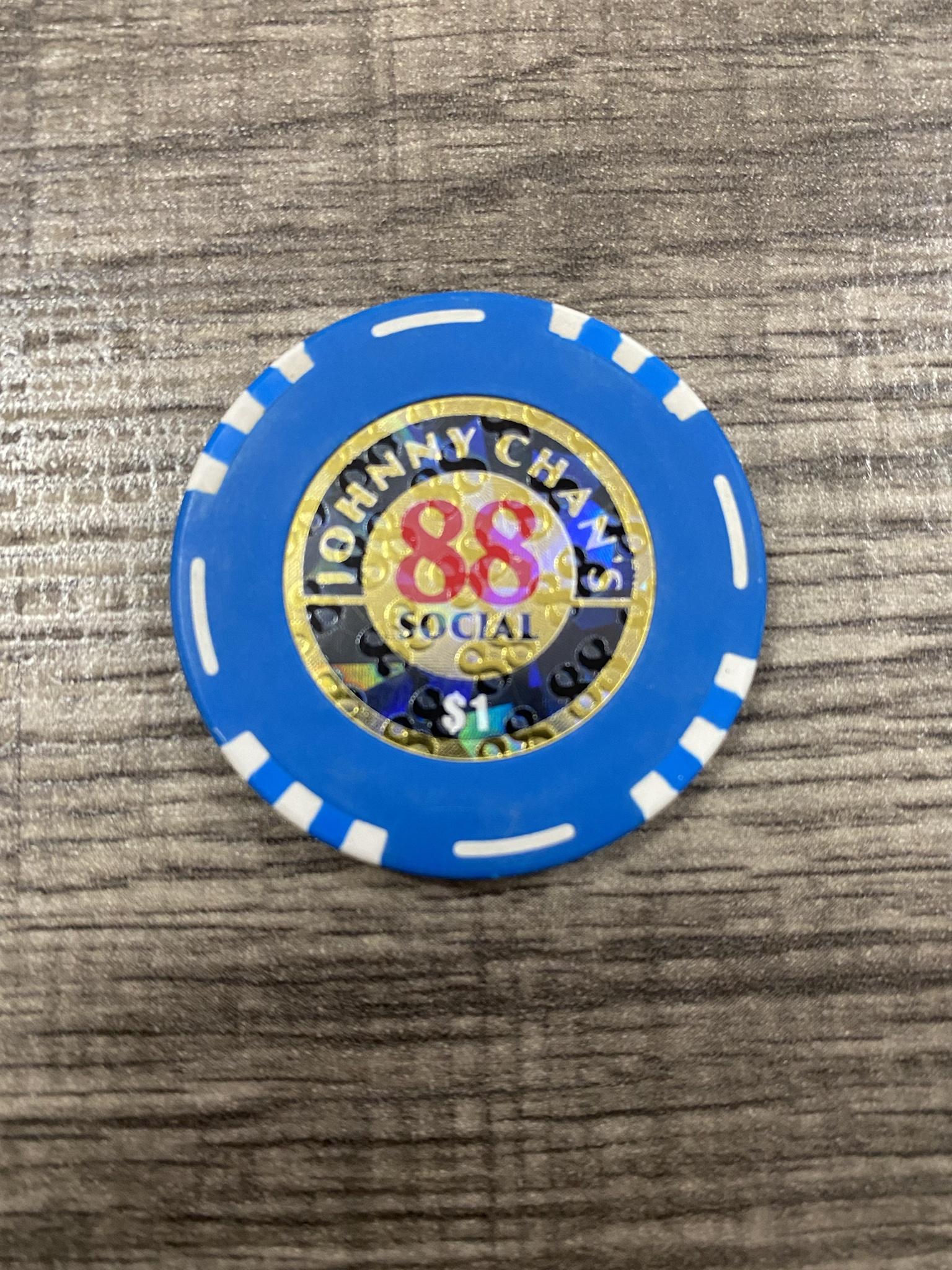 Today’s chip of the day is from Legends Poker Room in Houston, Texas. Legends was opened by one of the previous owners of 52 Social and it was opened in the parking lot half a block away from the old poker room. Apparently as soon as the owners of Johnny Chan’s stopped making payments they said eff it and opened Legends right next door and all their old players came running back to them. The dealer when I was at Legends joked that when the now 101 Richmond goes under they can buy back the property and move back across the parking lot into the bigger and better building they used to inhabit. I played for two hours, I can’t say I was impressed by the new room but it sure was busy.

The chip is blue with 3 small white edge inserts. The centre inlay is white with gold writing. There is a poker chip with the club name splitting it in half. The full club name and incorrect location are around the edge of the inlay. The denom is listed in black on the gold chip. I can’t find any reference to Legends Poker in Dallas but all of their chips except for the tip chip list Dallas and the tip chip doesn’t list a location. I didn’t realize the incorrect city until I had left Houston so I wasn’t able to ask anybody at the club. 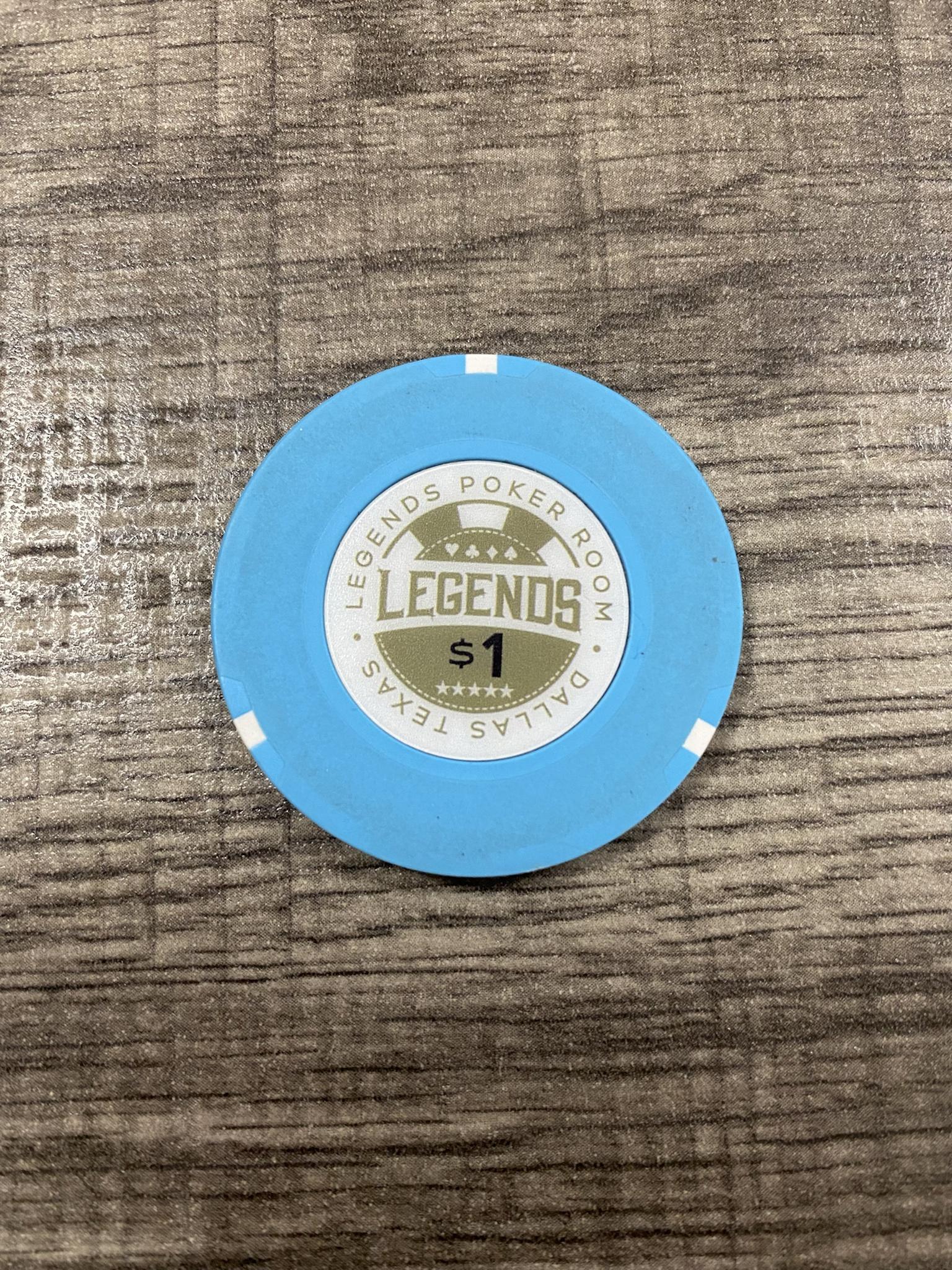 Today’s chip of the day is from All In Poker Club in Houston, Texas. All In was formerly Mint Poker which I visited last year right after it reopened. Mint would close for good in September 2021 and on October 7 All In opened. The club has the same layout inside but a completely different vibe. They are going for a cool hip hop club vibe with loud music, low lights and hot girls serving drinks. When I got to All In there were two games, 1/3 Holdem and 5/5 plo, I sat at the 1/3 as a seat was open. As soon as I sat down a few players pointed to the other game and said do you know who that is? I said no, they informed me it was Adrian Peterson one of the best running backs of all time who is from a hour north of Houston. I probably wouldn’t have noticed him had it not been pointed out and honestly I didn’t care as I’m not a celeb person. I played for a few hours and lost about $800 before cashing out. The first thing the cashier said to me as I was cashing out is, do you know who that is over there? Apparently he comes in a few times a week and apparently they like to use that as advertising for their club. All is fair I guess if Adrian doesn’t mind.

The chip is blue a mess of colours, red, blue, white and black. The chip has the same vibe as the club with the hooded player in the middle of the chip giving off the “cool” vibes. The club name is black on the logo and the location and denom are in white. 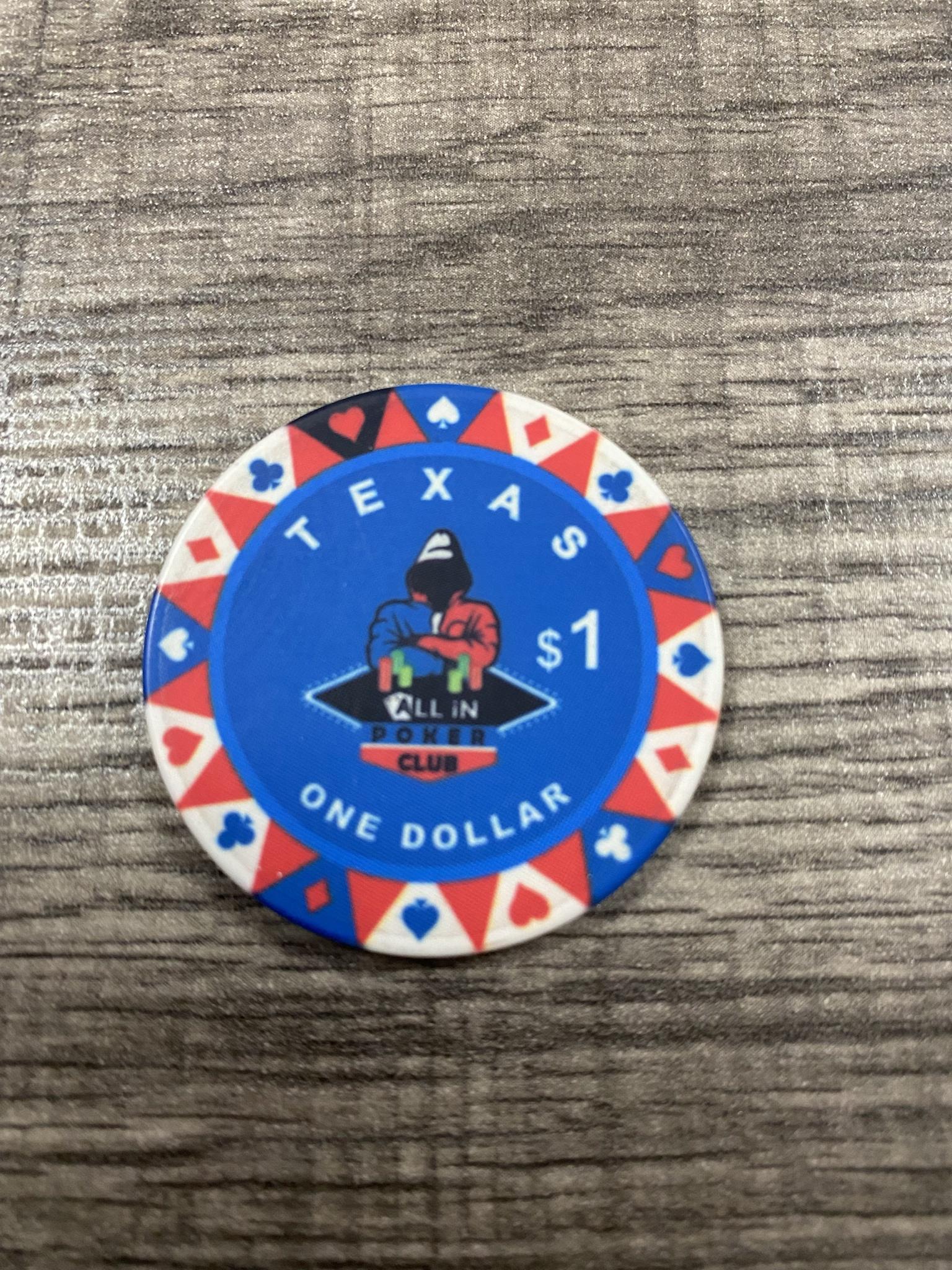 You can shear a sheep a hundred times, but you can skin it only once. — Amarillo Slim Preston
RSS Feed