Jimeenez, PG! First of all, thanks for finding this omission and letting me know about it. (Fixed, now.) Second, it strikes me that it must have taken a significant effort on your part to find this -- does this mean that your life in this age of the pandemic is really that boring? I am rather confident that I would never have discovered this without your search, so my "Thanks!" is quite genuine.

Third, it is plausible to me that I might actually have an excuse for that oversight. I indexed the chip that smoothgrh posted earlier that day (at 2 a.m. EST), but missed yours. Why would that be?

Well it turns out that I had a computer disaster that (I think) arose on 12/1/21 that has caused me extended grief and distraction since then and I am still working to get straightened out. That day (at least some day in very early December) I got a pop-up notice from Apple saying that a new version of the Mac operating system was available and suggesting that I update from macOS 11.6.something to 12.0.1.

I did that, and immediately began experiencing agony. There were several things that would no longer function properly on my computer, and over the next two weeks I had multiple help cases created with Apple's Tech Support folks. In spite of their sincere efforts, the problems weren't fixed. I finally decided that even though I had been screen sharing with their reps, I might need to have support from someone who was right there with the computer and seeing what was going on.

I made an appointment with the "Genius Bar" at a local Apple Store, took my computer in, and wound up spending hours there. Eventually, when they couldn't figure out what was going on, they suggested I reinstall macOS 11.6 to see whether that fixed the problem. They had the old system instilled on a drive that they could hook up to my computer and do the re-install for me, so I said OK. Unfortunately, while the specific problems I had been fighting with seemed to be resolved, they did not tell me that in the process of going back to an older OS, a whole bunch of stuff would disappear from my computer: applications, folders of email archives, documents, etc.

I asked them whether I could restore that stuff from the Time Machine backups I had been saving on an external drive. They recommended against that, saying that if I restored stuff, I might accidentally restore whatever had been causing my problems. The remainder of December was a computer nightmare for me.

In early January, I got guidance from Apple Tech Support on updating once again to OS 12, which by then had been revised to version 12.1 That seemed to work fine, except for all of the missing information. Earlier this week, I started working with Tech Support again, trying to recover some very important stuff from my Time Machine drive, and I have made significant progress on that. I think I am still missing some stuff, but I think I will survive.
link to original post

To answer your first point, have you forgotten that I’ve done this 2 previous times. I try and do it every 18-24 months but because of the pandemic there was less need.

Second, don’t you know to NEVER update Apple products????
You can shear a sheep a hundred times, but you can skin it only once. — Amarillo Slim Preston
Doc

Yes, I know you have done this before, and I do appreciate it. It just seems like a lot of work, and I am glad that someone other than me is willing to do it occasionally. And if I never updated Apple products, I would still be trying to use the Mac SE that I bought in 1987 to replace my IBM portable PC. I don’t think that would be feasible now, but periodic updates and upgrades have allowed me to stick with the Mac line for quite a few years. (Of course, perhaps I should admit that I am still using a MacBook Air from early 2015.)
PokerGrinder

PokerGrinder
Joined: Apr 30, 2015
Ya it takes me a few hours each time but it’s not a big deal, happy to help out.
You can shear a sheep a hundred times, but you can skin it only once. — Amarillo Slim Preston
Konbu

Hello everyone. I'm filling in for a few days for PG then he will resume.


I visited Spain last September but never got around to posting the chips. Better late than never I guess haha. I also visited Casino Barcelona this trip and played some UTH etable but for some reason didn't collect a chip. In order to gain entrance to all the casinos I visited I had to present my passport. I was then given a printed receipt. Doc described this in detail in a past thread (https://wizardofvegas.com/forum/off-topic/other-casinos/11934-barcelona-spain-casino-receipt/#post195333). After Barcelona I made my way down to Tarragona which was about 1 hour away by regional train. This casino had 1 UTH etable with 1 EUR min, 1 BJ etable, 8 poker tables, 1 roulette with tables on either side of the roulette wheel, with 5 EUR min on the numbers and 20 EUR min on the even money wagers (suerte sencilla) such as odd/even, red/black, high/low. My notes did not say what the min is for other outside bets like columns or dozens. The roulette is only open on Friday-Sunday. I played UTH here then went to the cage to buy this 1 EUR chip. 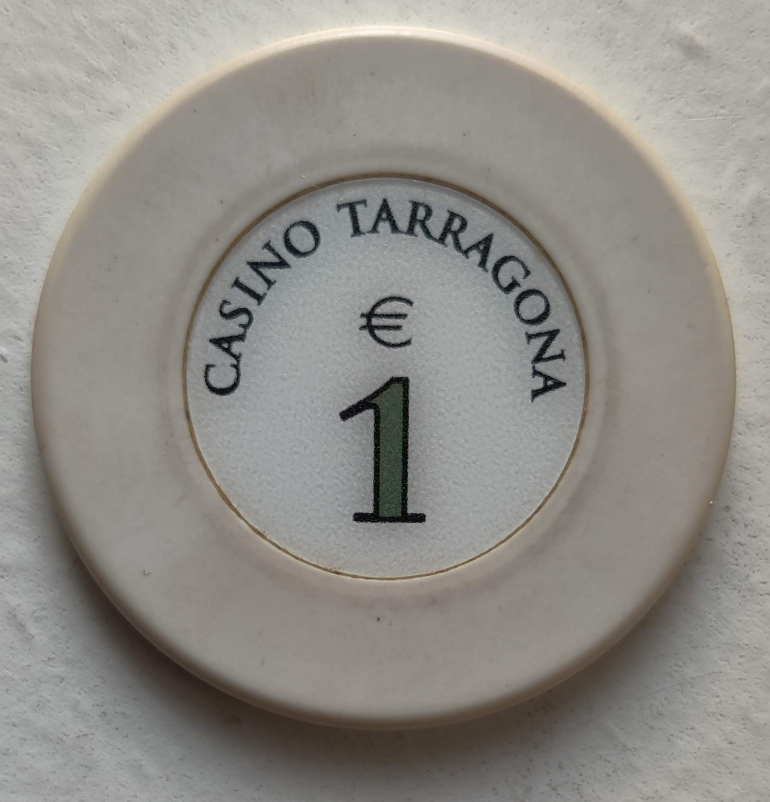 
After traveling about 150 miles in a little over one hour by train from Tarragona, I arrived in Zaragoza. The alternative would have been a slow train or coach bus that would take about 3.5 hours. Thank heavens for high speed rail! Something that we don't have in the US. This was another small casino, with 3 BJ, 2 roulette at 2.5 EUR min, and 9 poker tables. There were also machines connected to the live roulette table which featured lower minimums of 0.5 to 1 EUR. I didn't spend much time here, only changed 20 EUR and put 17.5 for 1 spin and lost it all. At least Zaragoza was a decent sized city to spend 2 days wandering around sightseeing. 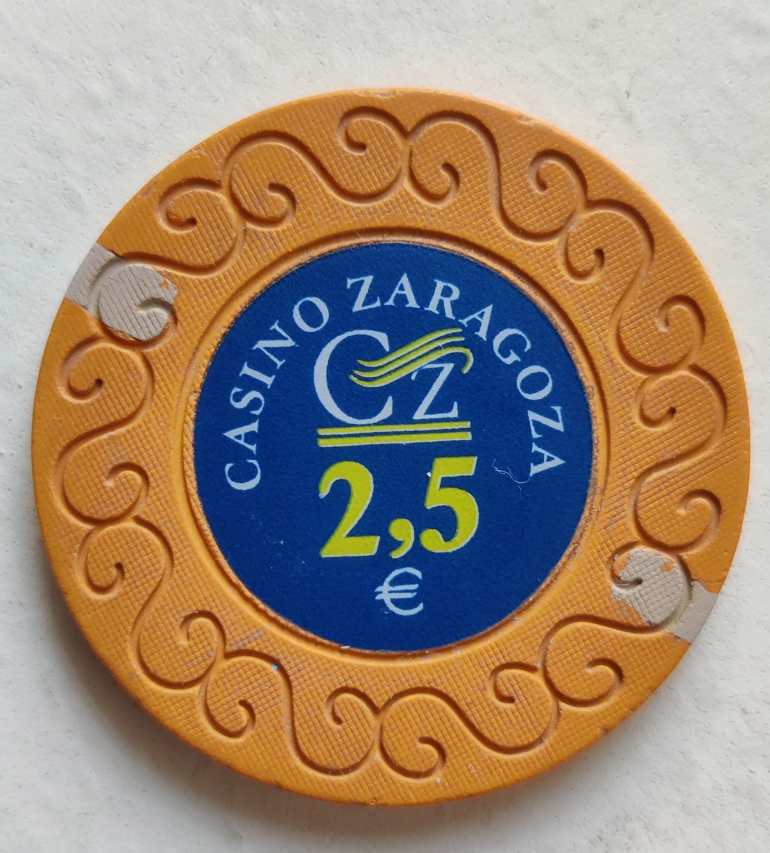 
This casino is located near the metro station of the same name Gran Vía and the street it is on looks like a mini version of NYC 5th Avenue with many shops and famous brands. It has its etables all on the ground floor with 3 BJ tables at 2-500 EUR, 1 UTH at 2-50 EUR, 1 roulette with a live wheel (also etable with betting panels in front of each player). The 1st floor had 10 poker tables, and 2nd floor has 5 roulette tables at 5-100 EUR, 1 baccarat at 10-1000 EUR, 2 BJ at 10-1000 EUR with CSM, and 1 caribbean poker. The photo you see on their main page is the 2nd floor. It looks very classy and exclusive. I only played UTH and was able to get one on my second try with another cashier after the first one at a different window refused to. 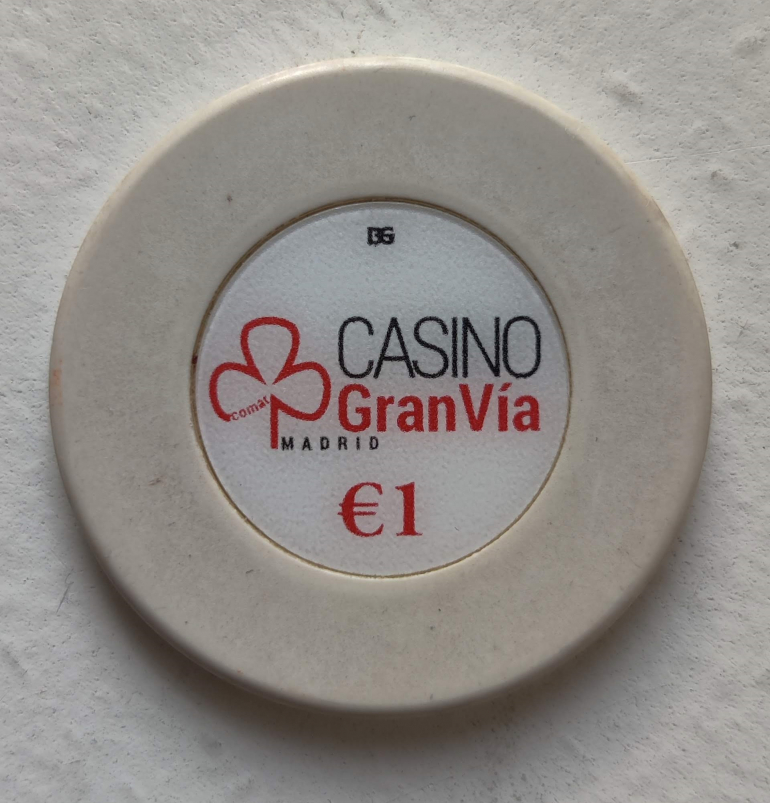 Well, Konbu, not only did you provide us with a nice CCotD post and image, you also helped to correct an error in the thread index! When I added the Gran Via to the index, I discovered that I had indexed the Gran Casino de Barcelona out of alphabetical order (by more than a row) among the Europe entries and got that fixed. Thanks!
Konbu


There's 2 casinos in Madrid with the same name, in Colón and Torrelodones. I visited Colón which is centrally located in Madrid, vs Torrelodones which is way out in the northwest of Madrid. They have 2 baccarat at 20-1000, 1 UTH etable at 1-50 EUR, 2 BJ at 10-1000 with CSM, 1 BJ etable at 5-500, 5 roulette at 5-100. Again, I wasn't really in the mood to play for any length of time and even if I was, the BJ tables were packed. Good thing I got a 5 EUR slot promo when I went into the casino so I considered that my bet at this casino. When I went to the cage to try to buy a chip the cashier refused until I explained that I wanted it as a souvenir. He then tried to sell me a 2.5 EUR one saying it's more colorful. I insisted on the 1 EUR chip and he finally changed it for me, but he found it very amusing that anyone would try to collect chips.

With this I'm finished and PG can continue posting. Thanks PG. And thanks to Doc as always for keeping the index up to date. 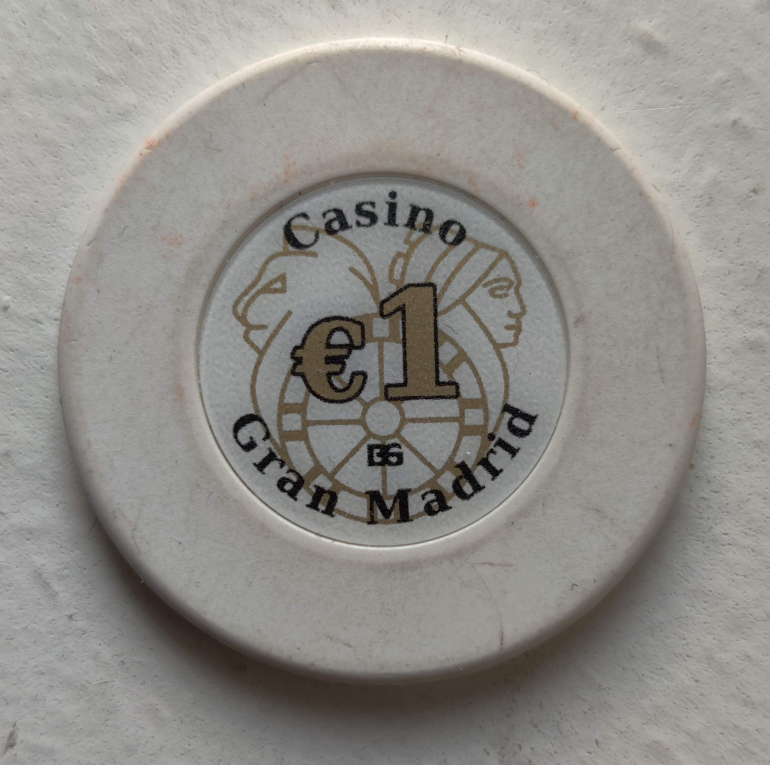 Doc
Joined: Feb 27, 2010
I indexed this post under the name "Casino Gran Madrid" rather than just "Gran Madrid", because that is the way I did it for a number of earlier Europe chip posts for which the chips specifically are labeled with an intro "Casino" followed by (mostly) the name of the city. No, it doesn't look as if I am being very consistent on this point. Does anyone want to take over management of the thread index?          ;-)
PokerGrinder

I indexed this post under the name "Casino Gran Madrid" rather than just "Gran Madrid", because that is the way I did it for a number of earlier Europe chip posts for which the chips specifically are labeled with an intro "Casino" followed by (mostly) the name of the city. No, it doesn't look as if I am being very consistent on this point. Does anyone want to take over management of the thread index?          ;-)
link to original post

Hard pass, doesn’t pay enough.
You can shear a sheep a hundred times, but you can skin it only once. — Amarillo Slim Preston
RSS Feed