Doc I have noticed that you listed the original Oaklawn chip as 'Oaklawn Park" The chip makes no mention to "Park" and neither does the chip guide or the casino website. I'm not sure why you have it listed that way. As far as this chip and that chip I have no idea how you want to differentiate the two chips in the index.

Oaklawn Park vs. Oaklawn Racing Casino Resort???? Man, it might be difficult to dredge up all of the relevant history.

The "ever-reliable" Wikipedia currently has their web page using the "Oaklawn Racing Casino Resort" name, while they note that the place opened as Oakland Park Race Track in 1905. They refer to racing events at "Oaklawn Park" at least through 2019, well after I visited their all-electronic-games casino in 2015. I suspect -- but cannot document -- that the signage around the place still all said Oaklawn Park, even though that designation was not used on the chips even back then. It was not until April 2019 that the Arkansas constitution was amended to allow full, live casino games.

Did the casino ever really operate as "Oaklawn Park"? If so, did they just not include the "Park" designation on the chips for some reason like "We plan to change the name eventually and don't want to have to rebuy chips", or some such thing? Did the casino name get changed when the constitution was amended? On the other hand, could they perhaps have operated the track under a different name from the casino even back in 2015 but with signage that didn't make that clear to patrons? I have no idea of the proper answers.

Since the chips that are currently in use have not changed, my usual view would be that the casino has not changed and we shouldn't need two CCotD posts for this place. However, since you have already composed and made your post, I will add it to the directory under the simple name of "Oaklawn". That's somewhat like the way we have both Southland and Southland Park shown in the index, but those have different chips shown. If someone has different thoughts, I am open to suggestions.
PokerGrinder

Today's chip of the day is from Saracen Casino in Pine Bluff, Arkansas. Saracen Casino opened on 10/20/2020 and is owned by the Quapaw Nation Casino. The casino is very large and it felt like the rows of slot machines went on forever. Saracen has 2000 slot machines and 50 table games. I spent a few hours there and played BJ to collect my chip after I picked through all the slot machines.

The chip is white and looks like a Chipco but it doesn't have the Chipco logo. The chip has 2 blue edge inserts and a couple of objects around the edges. The objects look to me to be a trident/pitch fork and the blue one looks slightly like a dream catcher, what do you think? The centre inlay is 2/3 white, 1/3 blue with a blue border. It is faint but about 2/3 of the edge of the inlay has black gear like marks. The casino name is red except for "aracen" which is blue. The casino logo looks to be a Native American with an arrowhead in his hair. 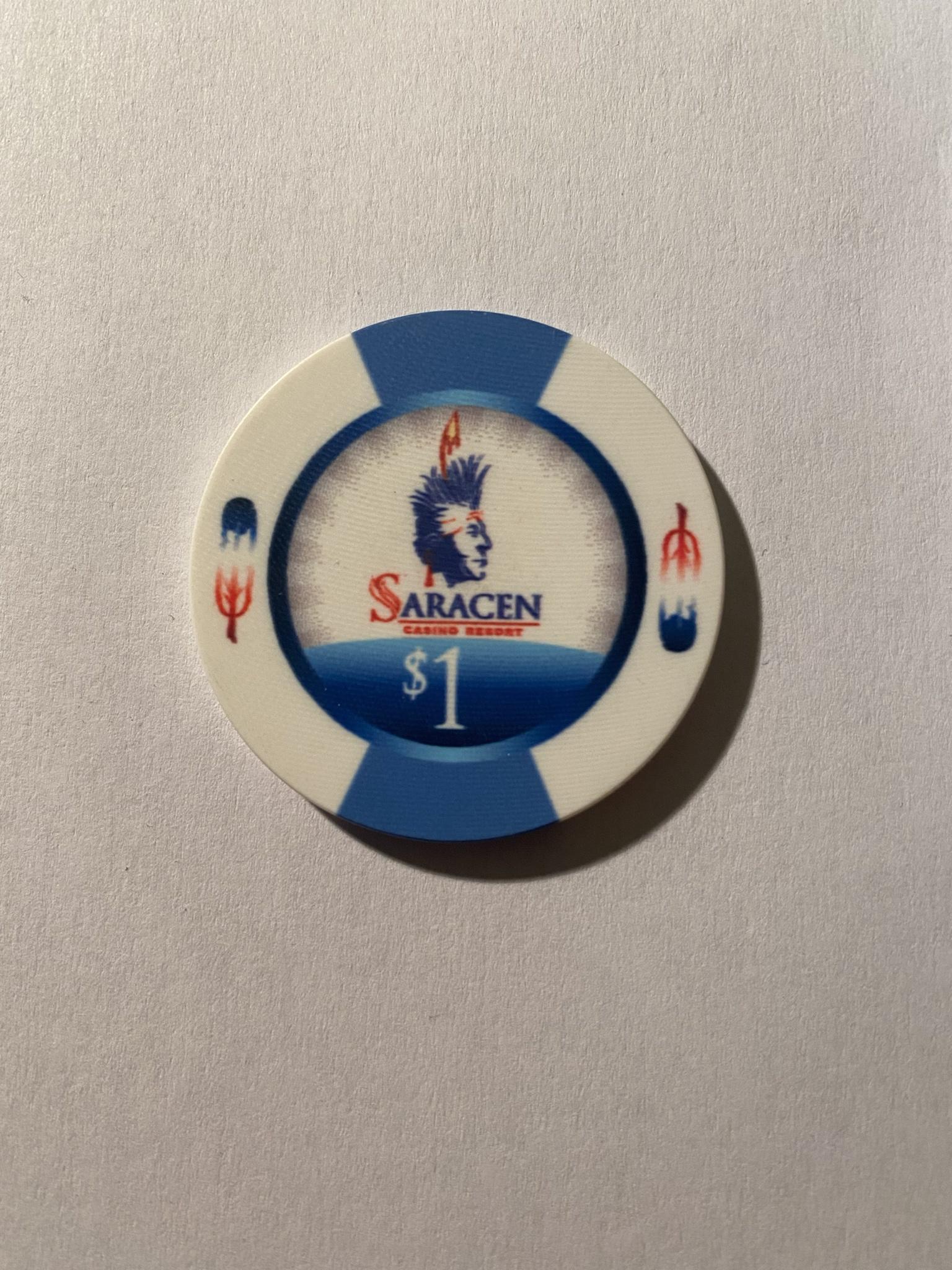 Today's chip of the day is from Desert Diamond Casino in Glendale, Arizona. The fourth Desert Diamond Casino opened on December 20, 2015 and immediately faced legal opposition. Apparently the state was ok with the tribe building a new casino but not in the Phoenix area. Due to the disagreement the casino was forced to open with Class II slots and no table games as the gaming commission wouldn't issue them a full gaming license. In mid 2017 the tribe and state came to a settlement where the tribe got everything they wanted but had to sign an agreement to not build any more casinos in the Phoenix area. The casino now has 1089 slots and I wasn't able to find a published number of table or poker tables. I played BJ to collect my chip as I usually do and I either won or lost or broke even, who knows? 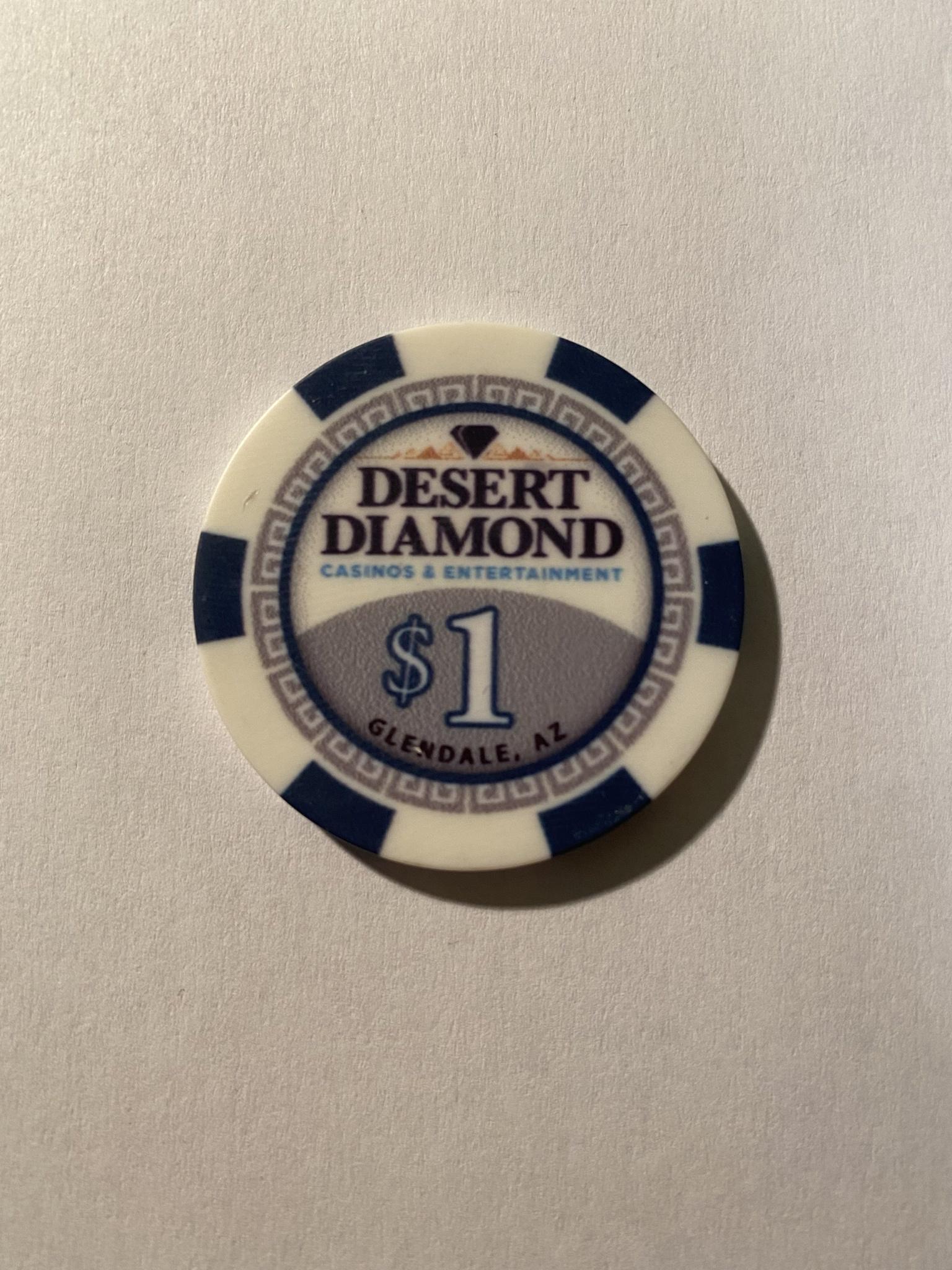 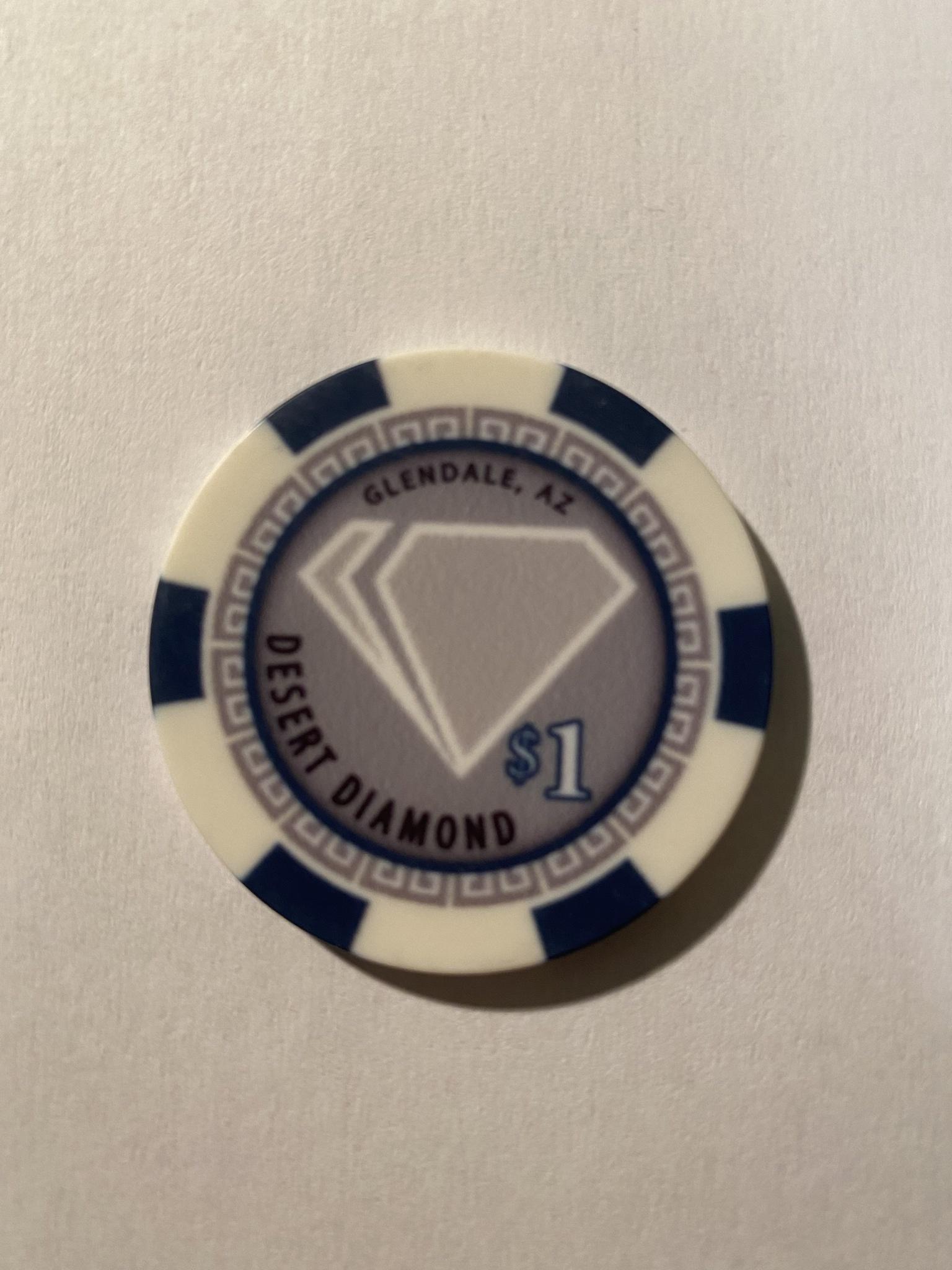 You can shear a sheep a hundred times, but you can skin it only once. — Amarillo Slim Preston
Doc

Doc
Joined: Feb 27, 2010
When rdw4potus posted his CCotD for Desert Diamond, he included a chip from the Tucson establishment and presented it as representing multiple casinos operating under the same name in Tucson and Sahuarita (and Why), with that parenthetical one (at least at that time) operating as slots only. I have now edited the thread index to specify that post as representing just the Tucson casino, opening up the opportunity for at least one more Desert Diamond CCotD post, if anyone has or gets a chip naming the Sahuarita location.
PokerGrinder

PokerGrinder
Joined: Apr 30, 2015
I stopped at Sahuarita and they still use the Tucson chips.
You can shear a sheep a hundred times, but you can skin it only once. — Amarillo Slim Preston
PokerGrinder

PokerGrinder
Joined: Apr 30, 2015
I accidentally collected a new chip today. I was doing my rounds of the casinos and I somehow missed that one of the casinos in Calgary was sold and renamed. The new chip is very sleek and I will post it here sometime between now and never as a chip of the day.
You can shear a sheep a hundred times, but you can skin it only once. — Amarillo Slim Preston
RideTheEdge

I had been away from home for at least a month when I dragged my bag up the stairs to what has become a strange place to me, my own apartment.

Greeting me on the counter is another oddity: a casino chip from France.  My daughter went to France recently where a friend of hers who knows I collect chips picked this up for me. Unfortunately, I have nothing to share about this casino other than the story of how I got it.

A little research in this very thread shows several nearly identical chips all saying "Casino Barriere" with a different name beneath the denomination. PG posted the following similar chips from the French Riviera:

This one is from Enghien-les-Bains located near Paris. The front and back are the same. 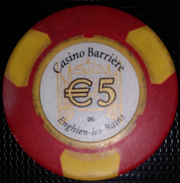 This is my last new chip from Nevada as I haven't had a chance to go to Resorts World, they opened a few days after I left. I will start on a new state tomorrow.
link to original post 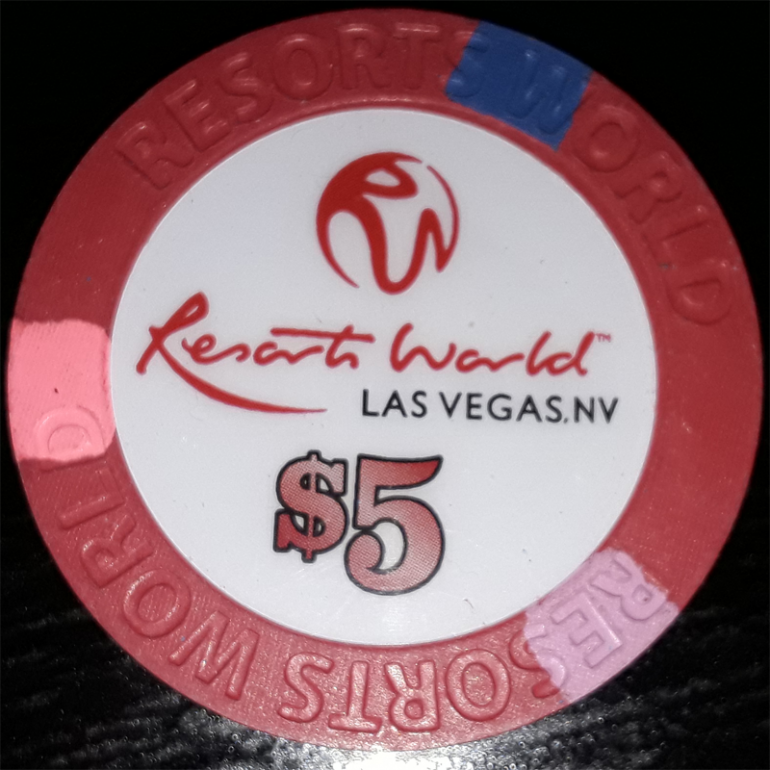 Aww, cmon, Don! You are not at all a newcomer around here, and I feel quite confident that by now you know that if you post in this thread the very first chip from a new casino, you are supposed to format it with a header that specifies the State (or other category), the city, and the name of the casino, right at the beginning of the post. (It also helps a bit if you can say at least a little bit about the casino itself.) That makes it a genuine Casino Chip of the Day post and gets that post linked to in the thread index back on page #1.

Soooo, can you edit that Resorts World chip post to meet such standards so that I can add it to the index?

And BTW, RideTheEdge, thanks for your European chip post (including the proper CCotD formatting). ;-)
PokerGrinder

PokerGrinder
Joined: Apr 30, 2015
Spa casino in Palm Springs has been renamed Agua Caliente Palm Springs to match their other two properties. New chips have been released.
You can shear a sheep a hundred times, but you can skin it only once. — Amarillo Slim Preston
RSS Feed