Doc
Joined: Feb 27, 2010
This post is not just a space filler, but it comes pretty close to that. I just wanted to point out that without this post or another one by tomorrow, this thread would have gone a full month without any posts, and it might be the first time in the history of the thread that has happened. I have to wonder whatever happened to Ayecarumba's post of his chip from the "new" Sahara casino (former SLS). How much time do you need, Aye?
Ayecarumba

This post is not just a space filler, but it comes pretty close to that. I just wanted to point out that without this post or another one by tomorrow, this thread would have gone a full month without any posts, and it might be the first time in the history of the thread that has happened. I have to wonder whatever happened to Ayecarumba's post of his chip from the "new" Sahara casino (former SLS). How much time do you need, Aye?

Actually, I need to set up with a host for the photos. Any recommendations?
Simplicity is the ultimate sophistication - Leonardo da Vinci
Gialmere

Here is my home set of chips... 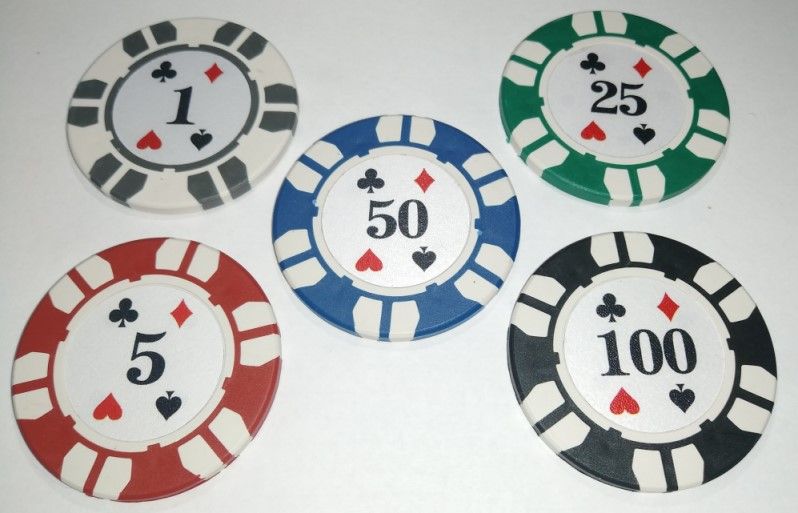 At 13.5 grams they are heavier than standard casino chips. Admittedly they are not the prettiest things in the world. In fact, they weren't even my first choice when I started looking for a new set. The ones I wanted had a cool royal flush inlay. When I read the reviews, however, I found the inlays were merely stickers that started peeling off when first taking them out of the box. So these chips became plan-b and they do have a few advantages.

For starters the inlays are printed on so there's no peeling issues. Note that the denominations are not specified; they could represent US dollars (or cents) or pounds or pesos etc. Finally, the big numbers help players with poor vision or, more specifically, players with colorblindness.

So, overall I'm around 90% pleased with them (which ain't bad). I just wish they had more pizazz.

[If interested, these chips are easy to find online.]

Hopefully someone else will showcase their home chips.
Have you tried 22 tonight? I said 22.
Doc

Actually, I need to set up with a host for the photos. Any recommendations?

To be honest, I am not really in a position to give good advice on this. I host my images in a section of my own domain, which I originally created (and keep paying for) in order to control my own email. I know that rdw4potus uses photobucket and PokerGrinder uses imgur, but I have never tried either of those and don't know what is required.

As far as my quips about a shortage of recent posts and chip images, it's not just your "missing" Sahara chip, Aye. Back in November, PG was egging me on to hassle GWAE to post the chips he collected in Washington some time in October. He had worked like crazy trying to develop an itinerary of chip collecting in conjunction with a business trip, and his plans just kept getting changed. I don't know how many of the chips he collected would be new ones to this thread, but (unless I overlooked something) we have not seen those or had any new casino chip posted (ignoring personal chips, sorry Gialmere) since one I posted from Aruba way back on the 1st of October. If people are still collecting chips from casinos not represented here, why can't we get them added to the thread?
Gialmere

GWAE
Joined: Sep 20, 2013
Hey I said a while back that I will post them when I can find them. They seemed to have disappear. Well I know where 4 of them are. I will see if they are new ones on here
Expect the worst and you will never be disappointed. I AM NOT PART OF GWAE RADIO SHOW
smoothgrh

Today’s chip of the day comes from Seven Feathers Casino in southern Oregon. It’s right along a Highway 5 offramp—100 miles north of the California border and 200 miles south of Portland.

It’s a 90-minute drive from Eugene, where I travelled from on my first visit—around 1990. Back then, it was a merely a bingo hall not unlike one you’d find in any suburb. I was in college then, and one of my student union counselors asked me if I wanted to go. She was Native American (and the first vegetarian I ever met), but I don’t know if she had any association to the tribe—I didn’t think to ask! Looking back, it seems odd that she asked me to join her, but then I was an adult so no impropriety there. In one game, I was one away from a bingo, and that was a thrill. Ultimately, neither of us won.

A couple years after I graduated, I stopped by for a rest stop on my drive north back to Eugene, surprised to see a big sign showing that it had become a casino. I vaguely remember walking through and seeing the early 1990s video poker machines.

I got the chip around 1997-98. By then, I had two main entertainment passions: pinball and casinos. I went to the Pinball Fantasy shows in Las Vegas run by Tim Arnold (who now operates the Pinball Hall of Fame). During one of those trips, I bought a craps stick from the Gambler’s General Store, and taught my dad how to play craps in our dining room. Around then, he and I went on another trip to Oregon to buy a pinball machine from a collector—and I made Seven Feathers a rest stop.

I was amazed that it had become a full-blown luxury casino with fancy decor and Las Vegas-style games. We were excited that they had a craps table (real dice craps!) so we could put our craps skills to the test. I had a good run as the shooter—lots of 6s and 8s. I remember betting conservatively (and I think my dad did too), so I won only about $80, but not bad for a rest stop!

My dad passed away in 2004, and it never occurred to me during that trip that I’d have less than 10 years left with him. I’m glad we shared some good times late in his life, including casino road trips like this one. 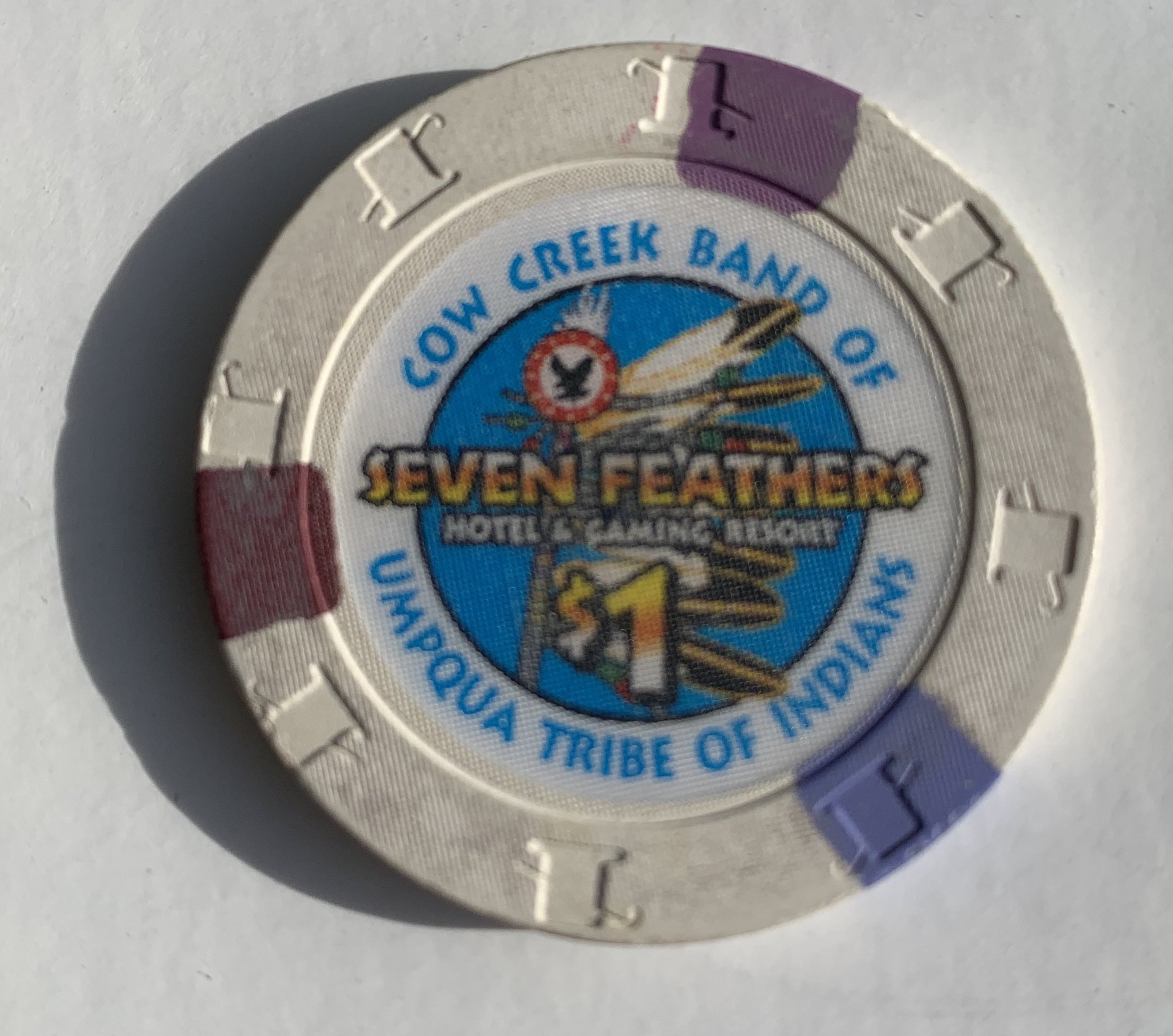 Thanks, smoothgrh, for getting this thread back into motion!

Just one comment, though, we have a long-established pattern for the official Casino Chip of the Day posts, a format that has the post begin with boldface font that identifies the state, city, and name of the casino -- check any of the earlier posts, or look at the very beginning of the thread for an index.

Unfortunately, by the time I have pointed out this omission from your post, there has likely been enough delay that you can no longer edit the post and stick that info in. I'll ask moderator beachbumbabs to help us -- she has given a lot of support to this thread in the past, and as a moderator she can edit your post for you.


Edit 1/18/20: Well, I did send email to Babs, but this morning I got a message from smoothgrh that he had been able to make the edit before he got locked out of the post. Excellent! Thanks all around!
Last edited by: Doc on Jan 18, 2020
Ayecarumba

Ayecarumba
Joined: Nov 17, 2009
As I continue to stall for time before posting a "new" Sahara chip, I came across this on the Rampart website:

Wizard reminded me in his last "Ask Me Anything" livestream that the Gaming Commission frowned on the $8 chips produced to commemorate Chinese New Year several years ago and ceased approving them. I wonder what the Rampart gave out?
Simplicity is the ultimate sophistication - Leonardo da Vinci
GWAE

GWAE
Joined: Sep 20, 2013
What was their issue with the $8 chips?
Expect the worst and you will never be disappointed. I AM NOT PART OF GWAE RADIO SHOW
RSS Feed