Any new casinos in the greater LV area open in the last year or two? Trying to justify renting a $60 car from MSS Advantage for a day just to drive to Stagecoach and back.

How do you treat name changes? Terribles to Triple 7? Bills to Cromwell? Aliente Station to Aliente Hotel and Casino? Hilton to Westgate? Quad to Linq? Have you been to the Margaritaville inside Flamingo?
"So as the clock ticked and the day passed, opportunity met preparation, and luck happened." - Maurice Clarett
rdw4potus

I also learned of a new MS Casino to open by the end of the year.

How did your trip end up?
"So as the clock ticked and the day passed, opportunity met preparation, and luck happened." - Maurice Clarett
wezvidz

wezvidz
Joined: Dec 9, 2013
Got them all. Except Margaritaville. Every time I've asked Flamingo or Margaritaville game tables or cage, they have Flamingo chips only.
Doc

How did your trip end up?

As wezvidz surmised, the new casino is indeed the Scarlet Pearl, to be located in D'Iberville, across the bay from Biloxi. Allegedly, it's to open for New Year's Eve, but if everything is built, I suspect they will have a soft opening a little earlier. When we get to meet your fiancee, I'll try to get my Mrs. to explain to her that tagging along on a chip-collecting excursion is just a life style and you can learn to tolerate it.

How did my trip end up? Well, to bring everyone else up to date on how it began... I have already explained to rdw that at the first casino I visited, I lost my entire craps buy-in without ever seeing a point made. A real downer. Then, after visiting casinos in LA, I said I had finally figured out why they called the whole state Lose-iana.

Our last stop did not involve chip collecting. We spent Sunday night in Tunica and met a couple of local friends to go to the Balagan Circus that was performing at Gold Strike. I had two sessions at the craps table, one in the afternoon and one fairly late at night after the show. The first session was breakeven -- pretty good considering the pattern, except that my wife got all over my case for spending too much time at the table when we were supposed to be checking into the hotel and getting ready to meet our friends.

The tide really turned for the late session. I wound up winning enough to make up for all of the earlier losses and give net favorable gambling results for the entire trip!

... Every time I've asked Flamingo or Margaritaville game tables or cage, they have Flamingo chips only.

I had the same problem. When I explained that I was a collector, the person at the cage checked with a supervisor and still said they had none. She said if I left my name they would keep an eye out for one, and I should come back in a few days. I did return a few days later. She checked in the back office and came back with one for me. I don't know whether it was true that they kept an eye out for one or perhaps they have a very few held aside and let me have one as a reward for persistence. You might ask to see what they would do for you.
Perdition

Perdition
Joined: Sep 3, 2013
Just a heads up for collectors:

Plaza now has 5,25, and 100 dollar denomination chips featuring the one and only Oscar Goodman. Not sure how long the run will be but they seem to imply it will be limited.

PokerGrinder
Joined: Apr 30, 2015
Hey Doc if it works for you, I will start posting chip of the day again on July 4th. Lmk if this is ok with you.
You can shear a sheep a hundred times, but you can skin it only once. — Amarillo Slim Preston
Doc

Doc
Joined: Feb 27, 2010
That sounds fine, PokerGrinder. I have a few that I can post now through the 3rd and will save my other one until after you complete your set. Before beginning new chips of the day, though, I want to post a few from casinos that have already been covered in this thread.

In April 2014, rdw4potus posted his $5 chip from the Margaritaville Casino in Bossier City, LA. I finally made it back to Bossier City last Saturday and picked up the souvenir $1 chip shown below. Paulson RHC mold with three edge inserts. The colors are reproduced reasonably accurately this time, except the pinkish edge insert is really a little more purple.

If the "Nothin' but a breeze" slogan on the second side is a Jimmy Buffet line, I don't recognize it. Is it from one of his songs? That second side also has some extremely fine print that I can't make out even with a rather strong magnifying glass. Right below the beach hut is the word "Relax." Hidden in the stripe below that is "in (something-or-other)". The something-or-other might be "Paradise", but I'm not at all sure. Does anyone recognize "Relax in ____" as a Jimmy Buffet line?

UV light reveals the repeated name of the casino on both sides of the chip, with the rather common error we have learned to look for. 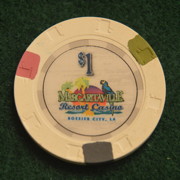 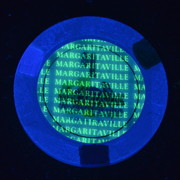 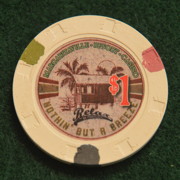 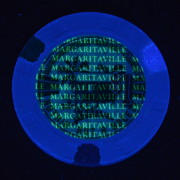 In September 2013, rdw4potus posted his $5 chip from the Golden Nugget Casino in Biloxi, MS. I also finally made it back to Biloxi on the same trip and collected the $1 chip shown below. This is a Paulson house mold chip with Golden Nugget and (twice) the block GN logo molded into the perimeter. Colors are reproduced accurately, I think. UV light reveals the Paulson hat and cane logo and the repeated GN script logo. No, they don't seem to have the G and the N swapped in any of them. 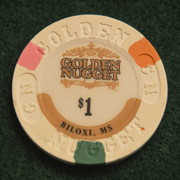 In July 2014, wezvidz posted a $1 chip from the Harrah's Gulf Coast Casino, the former Grand Biloxi. It is the Paulson RHC mold. I picked up an identical chip last week and am posting it here because wezvidz only showed us one side of the chip and did not have the UV images. UV light reveals the repeated name of the casino, and I couldn't find the "error" the first time I looked. (It's there all right, I just missed it.) 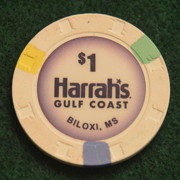 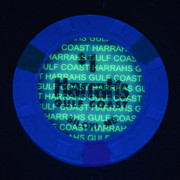 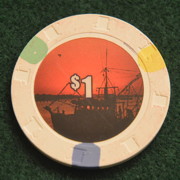 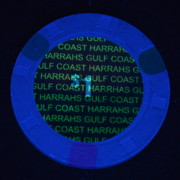 Tonight, I will try to post a new Casino Chip of the Day gathered on this same trip.
beachbumbabs
Administrator

I luvs me some Jimmy!
If the House lost every hand, they wouldn't deal the game.
Doc

The State of Arkansas has a total of two casinos. I can't really make fun of that, since that is double the number of casinos we have in my home state of North Carolina, though we expect to catch up in that count in just a few months.

Both of the Arkansas casinos are co-located with race tracks and are primarily slot parlors with some electronic table games. That is just about the kind of casino they had at Harrah's Cherokee in NC (without any sort of track) before Harrah's expanded and got real table games a few years ago. The Southland Park facility includes a dog track, while Oaklawn has horse racing.

When I posted my chip from Southland Park in September 2012, I described the blackjack game this way:

The blackjack game is the iTable from Shufflemaster, where a live dealer deals real cards from a shoe that reads the cards as they are dealt, entering the info into the table's computer system. A cash buy-in results in credits appearing on the table-top touch screen in front of the player, where wagers and hit/stand/insurance/double/split decisions are entered. When a player leaves the table, chips are used to pay out the balance of credits, and that appears to be the only use for the chips. It seems that a TITO printout and a redemption kiosk would be more efficient than issuing chips to be carried over to the cashier cage or another table, but then they would never get someone like me into their place even for a first visit.

It seems that someone at Oaklawn must have been thinking that same way about TITO vs. chips. In September 2013, rdw4potus visited Oaklawn and made a post to this thread that included this comment:

But there is one important point that I want to make in this thread, as it pertains primarily to chip collecting. I was at Oaklawn yesterday. Unlike Southland Park, which does currently use chips, Oaklawn has a fully electronic system. Cashout at Oaklawn is done by ticket. So, if anyone is thinking of going to the middle of Arkansas to visit a wonderful and historic track that happens to have a casino, know that there are no chips to collect there.

After reading that, I immediately deleted Oaklawn from my list of "Chips I Might Get". Then about a month ago, while I was planning my recent trip, I checked the Oaklawn web site and saw a claim of "real chips." I wasn't really convinced, so I called the casino and spoke to a pit supervisor who described their system as exactly like what I had seen at Southland Park. Whoops, change the trip itinerary!

I visited Oaklawn in Hot Springs just a few hours after leaving the Margaritaville casino in Bossier City, LA. I saw the blackjack iTable games with minimums from $10 to $50, but I didn't check for any rule differences. I played the $10 game for about 20 minutes and cashed in $25 less than my buy-in while also keeping $6 worth of chips. While keeping the usual $1 souvenir chip for myself, I also kept a $5 one to pass along to rdw4potus for his collection the next time we are able to get together.

Both chips are shown below. They are both Paulson RHC chips with the usual base color for each denomination. The $5 chip is more red and less orange than it appears in the photo. The $1 chip has four edge inserts, two each in olive and brown (yes, more brown and less "rust" than they appear here.) The $5 chip has what I think is an unusual combination of edge inserts: four triangular inserts in medium blue and four very narrow inserts in black. The center inlays are identical except for edge coloring and the denomination marking. Each shows four jockeys, the casino name, notations of "Racing" and "Gaming", and the city and state.

UV light reveals the same hidden image on both chips, just the repeated "Oaklawn". Now this one really took me a while to find the hidden "error". Have a look for yourself. 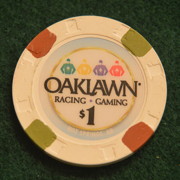 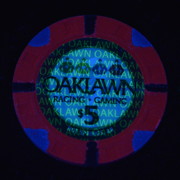