rdw4potus
Joined: Mar 11, 2010
That Downtown Grand chip looks exactly like Icon's "2-color standard phase II" chip. But, the inserts are so basic that I bet many manufacturers have a very similar chip available.
"So as the clock ticked and the day passed, opportunity met preparation, and luck happened." - Maurice Clarett
Doc

Back in a previous century (prior to my Vegas experiences), the Maxim Hotel and Casino provided the backdrop for the shooting of rapper Tupac Shakur, who has reportedly been seen almost as often post mortem as has Elvis. The hotel became the Westin, with the casino and maybe the hotel carrying the name Casuarina. More recently, the hotel has been known as the Westin Las Vegas, and as of November 2013 the gaming area became the Max Casino. CasinoCity.com still lists the place as "The Westin Las Vegas Hotel, Casino and Spa."

I visited the Max in February and found the gaming operations as casual and friendly as I remembered from the Casuarina days. I played $5 craps for an hour and left ahead by $50 and a souvenir chip, one of my very few winning sessions on that trip. After I left the table, I joined my wife in a lounging/lobby area where she had been enjoying a glass of wine, reading her Nook, and ignoring the surroundings. We chatted a while then headed back to our marvelous suite at the Cosmopolitan of Las Vegas, which I described extensively in a review for this site.

When we got to the Cosmopolitan, I realized that my Android phone/PDA was not in my belt clip, and ten seconds later we realized that I had left it on a table in the Westin lounge area after recording my gaming results on my calendar. Panic and self-loathing for my stupidity immediately ensued, and I called the Westin expecting the worst. Nope, they sent security to the area, recovered my phone, and said I could pick it up at my convenience. Which meant about ten minutes later. Crisis averted.

A chip from the Max casino was initially posted in this thread by s2dbaker back in December as a reply to my much earlier post about the Casuarina. A page later, I asked s2dbaker to edit his post to look more like a standard Casino Chip of the Day new offering, but he never did, and now the link to his image of a $5 Max chip is broken. He last visited this site almost two weeks ago, but if he makes it back to see this post, I hope he will repost his chip in reply.

This $1 chip is a dark blue (darker than it appears in the photo) Short Cane Version of the Paulson hat and cane design. According to the MOGH chip guide, this chip is available with the SCV on one side and the Long Cane Version on the other, though mine is the same on both sides. Both versions have two medium-wide edge inserts in black and white. The slightly undersized, black center inlay has the casino name/logo and denomination in red and both the word Casino and the city/state in white. Nothing on this chip fluoresces under UV light.

The higher denomination standard chips from the Max casino are similar designs in the expected colors, with combinations of SCV and LCV and various sets of edge inserts, all narrower than the ones on this $1 chip. There was also a set of Grand Opening commemorative chips issued in $5, $25, and $100 denominations. I think s2dbaker's chip was one of these commemorative chips. I wonder how many people keep $100 commemorative chips as souvenirs. 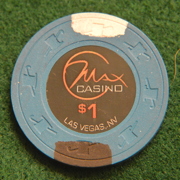 The former Terrible's Casino opened under the Silver Sevens name in July 2013, too late for me to get a souvenir chip during last year's WoVCon. I did not get back to Las Vegas until February. Upon arrival, between the McCarran rental car center and my hotel, I made a stop to check out the renamed establishment. I played $5 craps for an hour and left up $300 and a souvenir chip. If only the rest of the trip had shown such favorable variance. 'Twas not to be.

After I played, my wife and I had lunch in the café upstairs from the casino, but I did not look around the place enough to be able to describe any of the changes from when the place was Terrible's. Maybe my head was just swirling with dreams/delusions that gaming the rest of the trip would be like that first session at the Silver Sevens.

This chip is a white Short Cane Version of the Paulson hat and cane design, with three medium-wide edge inserts in pink, blue, and brown. The MOGH chip guide shows that the chip is also available in a combination of SCV and LCV, though mine is the same on both sides. That guide notes that the SCV/LCV chips are also available with the sides reversed, i.e., with respect to the sequence of the insert colors.

The slightly undersized center inlay has a background color that drifts from white to silver-gray in keeping with the name of the casino. The casino name is presented in a red logo form with a silver numeral 7 forming half of each V. The city/state is in black with the denomination in white outlined in black. UV light reveals that the pink edge insert fluoresces, but nothing else does.

The MOGH guide shows a $2 chip in a similar design, except for its peach color, the denomination mark, and the edge inserts, but the higher denomination chips use the Paulson Reversed Hat and Cane mold. There is also a $5 Grand Opening commemorative chip with the RHC mold. 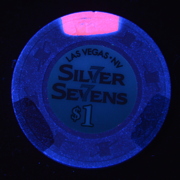 This post presents the last installment of my current collection of casino chips. Beginning tomorrow, member miplet will begin serving a short term (2 or 3 days, I understand) in the lead role of this thread, followed by a 1-day run for another member. Hopefully we will find some additional volunteer chip posters soon.
Nareed

the former Terrible's Casino opened under the Silver Sevens name in July 2013, too late for me to get a souvenir chip during last year's WoVCon. I did not get back to Las Vegas until February. Upon arrival, between the McCarran rental car center and my hotel, I made a stop to check out the renamed establishment. I played $5 craps for an hour and left up $300 and a souvenir chip. If only the rest of the trip had shown such favorable variance. 'Twas not to be.

Too bad the rest of the trip did not follow the beginning of it.

Did you happen to notice whether there's a new club card as well? I assume there is. I still have the one I got when it was Terrible's (and the T-shirt, too). Normally I wouldn't have visited an undistinguished casino off the Strip, but this one was on the way back from the Atomic Testing Museum. As that first visit I walked back to the Strip, it seemed silly not to go in while walking right past it.
Donald Trump is a fucking criminal
Doc

Doc
Joined: Feb 27, 2010
Their web site indicates that they now use Affinity Gaming's "A-Play Club" card. Maybe you should post an image of your Terrible's card to the Casino Club Card of the Day (sic) thread. The one that s2dbaker posted is now a broken link, as are all of the images he has posted here, I think.
Nareed

Their web site indicates that they now use Affinity Gaming's "A-Play Club" card.

Maybe you should post an image of your Terrible's card to the Casino Club Card of the Day (sic) thread. The one that s2dbaker posted is now a broken link, as are all of the images he has posted here, I think.

Oh, too much work. I need to scan the card, or take a photo, then edit it to obscure the name on it, then find a place to host it online, then write the HTML code to post it here.... I'm just not that committed to visual media, sorry :)
Donald Trump is a fucking criminal
Ibeatyouraces

It is one of ten owned by Washington Gold Casinos.

I have no clue how I ended up with my 50 cent chip. Must have left it in my pocket. They use fifty cent pieces now. I acquired my $1 chip chasing one of their promotions this past Thursday. Who knew trying to a 777 of mixed suits in Spanish 21 would deplete my $200 buy in. :+) 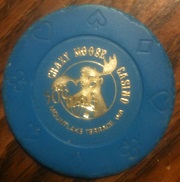 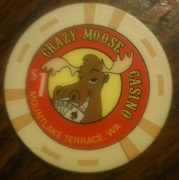 Doc
Joined: Feb 27, 2010
That is one crazy moose -- he's smiling while looking at the backs of his cards, exposing the faces to everyone else. Are there AP opportunities at the poker tables there?

Now miplet told me that he was going to be late in the day posting his chip for Saturday, but dang it, he missed the whole day by three full minutes! We might have to string him up and flog him with a wet noodle.

But thanks for the contribution!
RSS Feed