Is "Veneto" the brand name of a chain of casinos?

I think so, but I am not certain and had not checked into it until after reading your post this morning.

The web site for the casino-hotel in Curacao has a corporate information page that says it is "run by Silver Entertainment, a New York-based corporation that focuses on the acquisition and prime development of casino gaming and resort operations in Latin America, the Caribbean and the United States." The web site for the casino in Panama does not have a similar page but notes that it is the Veneto Wyndham Grand Hotel and Casino.

I checked the web site for Silver Entertainment. About all I can get to (without being able to log in) is a home page that includes a statement about their focus and notes locations in New York, Panama, Miami, and the Caribbean. There is a "Careers" link that leads to an address for sending resumes and also shows a photo of a hotel entrance with "Veneto" in the same script as on the Curacao chip, with a smaller sign saying "A Wyndham Grand Hotel." That second part sounds more like the Panama establishment, so I think the two places are affiliated.
Doc

If I had a good supply of chips left to post in this thread, either my own chips or a list of chips that others had offered to post, I would delay this particular chip for another month or so. That would give rdw4potus a chance to get back to Carson City to pick up a souvenir from the same casino to post in reply. Last I heard, he plans to drop by the Carson Station as part of an 1,800-mile-side-trip drive on his visit to Las Vegas for the WoV 2014 Spring Fling.

Unfortunately, it looks as if this thread is about to run dry temporarily, so maybe rdw can just post something now to serve as a place holder for his future post of a Carson Station chip.

I first visited the Carson Station casino in October 2011. The casino was under new management, and the table games were not in operation. I returned to Carson City last September and learned that the Carson Station casino once again was operating their table games. I played $1 craps – an activity that reminds me of a comment I heard from a comedian during my very first visit to Las Vegas. He said, "If you find that you are playing penny slots, just go ahead and shoot yourself. What's the potential for the game? You hit the jackpot and Wow! Three bucks." Of course, his comedy routine assumed that penny slots means you are betting just 1¢ per spin.

So I played $1 craps for over an hour at Carson Station and came out ahead by $15 and a souvenir chip.

This is a white chip with a gold foil print in the center providing the casino name, the denomination, the city, and the state. It is a rather old Bud Jones design known as "8-suits", with the sequence of suit pips around the perimeter not repeating. The mold design is so old that I initially assumed these were the same chips they used at the Carson Station before the change in management and the temporary closing of the table games. If this chip were very old, then it would be in remarkable condition. There is a tiny nick at the 7:00 position, but usually the gold imprint on this kind of chip is worn off very quickly, and it looks pretty much intact on this one.

I checked the MOGH chip guide. It indicates that this chip was issued in 2013 and does not show any older $1 chips from the Carson Station, just some $1 tokens and some 25¢ chips from Paulson. That surprised me, so I also checked the NGC Chip and Token Report. It does not indicate that there were any $1 chips ever approved for the Carson Station prior to one in December 2012, presumably this chip. Bud Jones/GPI must still be using a very old mold design.

And no, Carson Station is not part of Station Casinos, whose properties are all in the Las Vegas vicinity so far as I can determine. 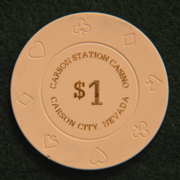 Konbu
Joined: Apr 20, 2012
I don't remember playing craps at this place. I must have gone during the day when the table was closed. I collected the same chip posted, maybe from blackjack. I did enjoy very much playing dollar craps at the Gold Dust West for the second time, just a month ago. My brother won a bunch of field bets on my rolls and successfully parlayed a field bet 5 times for a win of $60 on a $20 buy in. On the other hand, I slowly bled my $40 buy in away.
I CD-ROM.
Doc

I collected the same chip posted, maybe from blackjack.

Aha! That certainly sounds like a confession that you have (had) souvenir chip(s) from casinos not yet posted in this thread.

Considering the dire shortage of prospective daily posts, you need to check your collection for any more that we haven't yet covered here. My "final" chip will be posted on Friday of this week. I have communicated with one member who has agreed to post two chips, likely on Saturday and Sunday, and another member who has a single chip she will post, maybe Monday or maybe another day soon. Still looking for more folks with chips to add to the thread.
miplet

Aha! That certainly sounds like a confession that you have (had) souvenir chip(s) from casinos not yet posted in this thread.

Considering the dire shortage of prospective daily posts, you need to check your collection for any more that we haven't yet covered here. My "final" chip will be posted on Friday of this week. I have communicated with one member who has agreed to post two chips, likely on Saturday and Sunday, and another member who has a single chip she will post, maybe Monday or maybe another day soon. Still looking for more folks with chips to add to the thread.

If only Doc did a better job of convincing people to start their collections earlier. 8 years ago would have been perfect. I would have 12 chips instead of 2. I might even sneak in a 3rd.
“Man Babes” #AxelFabulous
Doc

Excellent! Just let me know for sure so that I don't ask two people to post on the same day -- we need to keep this going, not double up.
Konbu

Aha! That certainly sounds like a confession that you have (had) souvenir chip(s) from casinos not yet posted in this thread.
...

Not intentionally... I thought it was covered already. I don't have any other chips from properties not yet covered on this thread.

I have a 50c chip from the Carson Nugget but that property was presented in 2012. Maybe I should go check out the Graton one of these days.
I CD-ROM.
Nareed

Doc
Joined: Feb 27, 2010
Only if they are the kind that were directly in play on the casino floor.

I thought it was covered already.

If you have more chips in your collection, please do check the directory on the first page of this thread. I'd hate to miss out on your chips just because of another misunderstanding.
Doc

As I wind down my posting of chips to this thread once again, I have three to offer from a visit to Las Vegas earlier this year.

The Downtown Grand is the new incarnation of the former Lady Luck hotel and casino in downtown Las Vegas, on 3rd Street between Stewart Avenue and Ogden Avenue, just over a block to the northeast from the center of the Fremont Street Experience.

During the first half decade of the 21st century, the Lady Luck went through three changes in ownership then closed in February 2006 for what was expected to be nine months to a year of renovations.

That closing was before I completed collecting my souvenir chips from downtown Las Vegas, so I never went to the Lady Luck and don't have a souvenir chip to post from there. If anyone has a Lady Luck chip, please do NOT post it now. Just let me know, and we will devote a whole other day to that casino and chip.

Financing for the 2006 renovation collapsed, and the property was sold again. More financing problems arose, and conflicts with the city ensued due to lack of progress on the renovation and reopening. Actual work began on a limited basis in 2009, but the place did not reopen until October 2013. The web site of the casino operator tells some of the current structure but still makes the opening sound like a future event:

Downtown Grand Las Vegas will bring nearly 600 slot machines, 28 table games, 634 hotel rooms and 800 permanent jobs to a resurgent Downtown Las Vegas in 2013. Fifth Street Gaming is the operator of the gaming space, DTG Las Vegas Manager is the operator of the Hotel & Restaurant Operations, and CIM Group is the owner of the property. Located on the site of the former Lady Luck Hotel & Casino and in the center of the Downtown3rd metropolitan district, Downtown Grand Las Vegas will be the first property to open in downtown Las Vegas in more than 20 years.

My wife and I visited Las Vegas for a week in February 2014, and my gaming results stunk. I won at the first place I played and in my very last session, but I lost at nine of the ten sessions in between. My visit to the Downtown Grand was one of those sessions in between. I lost $100 playing $5 craps for just 20 minutes. I brushed it aside like the other losses, and we walked down to Main Street Station for the buffet, with me pretending not to be in a bad mood.

I don't know what the inverted V logo for the Downtown Grand is supposed to represent. At first I thought it might be the peak of a skyscraper, but the top of their building is not shaped like that at all. The logo is present on their web site, on images around the building, and on my souvenir chip.

The chip is a light blue, though not quite so light as it appears in the photos. It has six darker blue edge inserts and a dark blue center inlay for each side. Each center inlay has the denomination, the name, and the city/state in white, though the presentation differs. On one side, the name Grand is in a much larger font, with the inverted V logo used in place of the A. The other side has that logo appearing in a large scale above the casino name, with two white crescents containing the denomination numerically and in text.

UV light reveals that the base material fluoresces where it is exposed on the perimeter, but the edge inserts do not. On the center inlay, the "GRAND" on one side fluoresces in diagonal stripes as if it is partially covered by something. The large inverted V on the other side also fluoresces, and there are four smaller inverted Vs surrounding it, which are not seen under visible light. On that side only, there is a discontinuity in the fluorescence of the ring around the center inlay; I am not completely sure whether something is blocking part of a fluorescing ring or that there is an added partial ring in the vicinity of the small inverted Vs.

I am not certain who manufactured this chip. It's pattern under visible light shows some similarity to the Apache Gold chip I posted here, and that one I claimed was from Bud Jones. The other Downtown Grand chips in play have this same design but with the expected base colors for the higher denominations. 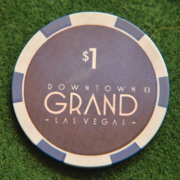 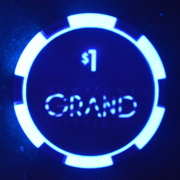 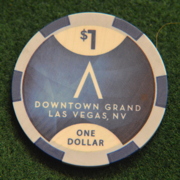 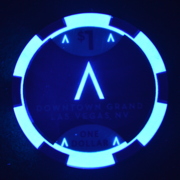