And this is our first chip from a casino in Mexico (which should probably be listed as "Category" rather than "State"). Perhaps we will get a few more, eventually.

Thanks, beerseason, for both your chip contribution and the tale about the casino. Sounds as if the eyecandy might be the best part of the experience. I've only been to Cancun once in my life, for a cruise stop in March of 1987. Since I haven't made it back in 27 years, I doubt that I ever will.
beerseason

beerseason
Joined: Aug 14, 2013
Doc, you would be correct it is in pesos. But before I went to the Playboy I withdrew money at the Hard Rock (HSBC ATM I believe, 2000 pesos for roughly 152.xx (13.07/1) including all of the charges. But when I was at the Playboy I noticed there was an electronic sign that had the conversion factor of 12.25 for 1 dollar and other currency rates. Assuming there wasn't a different rate, I could have turned around and got 163.25 for my 2000 pesos. Nice little EV+ play at 6.5% return.

Doc
Joined: Feb 27, 2010
My phone app says that the pesos:dollars rate is 13.06:1. Sounds as if the Playboy casino was boosting the house edge by selling pesos to the American tourists at a very unfavorable rate. If that's the case, I'm guessing they would not have bought your pesos at 12.25 to the dollar, unless you had a receipt that you had bought at least that many pesos from them.

When I posted my chip from Casino Rama in Ontario, I told about a related (though favorable) experience there:

The thing I do remember is that they had a very reasonable policy for currency exchange. At the time, the Canadian dollar was worth about $0.94 US, though it dropped to about $0.80 in 2009. I went to the cage and changed some of the USD that I was carrying for the CAD used at the tables. Any exchange fee was hidden in the exchange rate, but they gave me a receipt and said I could exchange up to that amount from CAD back to USD at the same rate within 24 hours. As a result of that policy, players lost on the exchange only to the extent they lost the converted currency at the table, not the all-to-common practice of losing in the exchange in both directions.

The Tulalip Resort Casino – this thread's first from the state of Washington – opened in July 1992. It is a Native American establishment operated by the Tulalip Tribes. The tribal web site has this greeting, telling a little bit about them:

Welcome, friends and neighbors; we are the Tulalip (pronounced Tuh’-lay-lup) Tribes, successors in interest to the Snohomish, Snoqualmie, Skykomish and other allied tribes and bands signatory to the 1855 Treaty of Point Elliott. Our tribal population is about 4,000 and growing, with 2,500 members residing on the 22,000 acre Tulalip Indian Reservation located north of Everett and the Snohomish River and west of Marysville, Washington.

Here is a photo of the casino that I found on the web.


(Edit 12/6/17: Just noticed that the link to that photo is now broken. As noted in posts below, the photo showed a sculpture of a leaping orca. Best I can offer now is a link to a similar photo on the Yelp page covering the resort, and I don't know how long this link will be good. Here is that link.)

The casino has a poker room spreading Texas Hold'em, Krazy Pineapple, 7-Card Stud, High/Low and Omaha, with limits ranging from $1 to $500 plus No Limit games. They also offer what they describe as "more than 2,000 of the newest slots."

One mile south of the resort, the tribe operates a bingo facility that they describe this way:

Offering 23 sessions a week, Tulalip Bingo is open everyday at 8:00 AM. Class II slot machines, high-stakes pull tabs and daily promotions add to the excitement. Ages 16 and over can enjoy bingo and 18+ can try the fun of Class II slots.

Now, I have not personally been to the Tulalip resort, or to any of the Washington casinos for that matter. Today's chip is provided for us by member SlangNRox, who did not want to write this post personally but shared the following with me via P.M.:

Not sure if I want to post my chip, but here is a scan I just made. It is a fairly generic chip with no markings on it. Stopped by there on the way back from a day trip from Seattle to Vancouver. It seemed to be the biggest/nicest casino in the area when we drove up to Canada on I-5. We stopped by on the way to Canada and then since we still had 2 of these $1 chips when we left we stopped by again on the trip back to Seattle There is a nice outlet mall right next to the casino and an Olive Garden on the far side of the casino parking lot. Played some mini baccarat which was unremarkable although it did feel good to bet against the table and win my $10 bet while someone else lost around $1500.
Feel free to edit this and post it if you want.

The MOGH chip guide attributes the chip to Bud Jones, as they do almost all plastic injection molded chips. I don't know the connection between the orca and the tribe or the casino, but the use of that creature on both the chip and the water feature in the lake suggests they like it as an icon at least.

Thanks, SlangNRox, for entertaining us with this chip and your recollections of the casino.
Last edited by: Doc on Dec 6, 2017
chickenman

Wow. Orcas right outside the casino!

I know. Usually the whales are inside the casino ;D
Donald Trump is a fucking criminal
chickenman

It seem that this thread has again come around to an appropriate opportunity for me to post a few chips from my own collection. I decided to begin this little series with the thread's first chip from South America.

The Coliseum (according to the Museum of Gaming History) is a former casino that was located in the Los Tajibos Hotel and Convention Center in Santa Cruz, Bolivia. Neither the MOGH nor CasinoCity.com list any currently operating casinos in the entire country of Bolivia. There is, however, conflicting information available from OnlineCasinoSuite.com, which claims that there are currently three small brick-and-mortar casinos in Bolivia, including the Coliseum. That site goes on to say:

Bolivia is currently under the administration of a left-leaning government, which seized corporate property in Bolivia in 2006. Given these actions, it is unlikely that foreign investors will build any new casinos in Bolivia in the years to come.

I cannot explain the conflicting information. I also cannot provide any more enlightenment about the Coliseum Casino based on my personal experience, because I have never visited there and have never even been to Bolivia. However, I did collect this souvenir chip by playing in a casino, which makes it a legitimate part of my collection. ;-)

I obtained this chip while visiting Curacao during a cruise that my wife and I took last November. I have previously noted that many of the casinos in the Caribbean don't seem to care just whose chips they are using in play. As I described when I posted my chip from the Plaza Casino in Curacao, they also don't seem to pay much attention to what denomination the chips claim to be. And there can even arise some possible confusion about the names of casinos: which is the "Plaza" casino -- the Paradise Plaza or the Royal Plaza? Answer: the Royal Plaza used to be called the Plaza.

When I visited Curacao in 2009, I played in the Paradise Plaza Casino, which had previously been called the Americana casino. On that visit, I picked up two souvenir chips, one of which was a $1 token from the Treasure Island casino in Sint Maartin and the other a $1 chip bearing the casino's previous "Americana" name. I have posted both of those previously.

Since they didn't have any "Paradise Plaza" chips in 2009, I went back to play again in 2013, hoping to get one. They still didn't have any with that designation in any denomination, and the MOGH catalog doesn't show any either. What they did have in play were the Treasure Island tokens in the $1 denomination and $5 chips from the Coliseum Casino in Bolivia. This time I kept the $5 souvenir – what the heck, I could afford to be a spendthrift, since I still came out $15 ahead at blackjack.

The chip is a red plastic injection molded chip with four gray edge "inserts" and four matching crescents, with a center ring around a silver coin insert. I believe it was made by Matsui, but I am not certain. The name of the casino is presented in a font similar to what is used on the Caesars Palace chip that I posted. The MOGH catalog says that this chip was used at the former Coliseum Casino in Bolivia and is currently used at both the Paradise Plaza where I got it and at the Coliseum Casino in Phillipsburg, Sint Maartin (which CasinoCity.com claims is called the Coliseum Princess.) 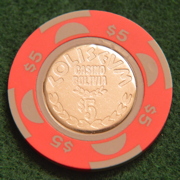 SlangNRox
Joined: Jul 19, 2010
Doc thanks for posting my chip and helping me make a small contribution to this epic thead of forum members chip collections. Sure hope you make it out to this area soon. Seems like there are a lot of casinos around this area and in Richmond just past the border.
RSS Feed