I have never been on a cruise ship that had a casino open in port. Don't think I have even heard of one. I very much suspect that the casinos aboard ships in the Med are open from shortly after clearing the harbor until approaching the next one. That's basically the way it works in the Caribbean, and many of those islands are very close together.

On one cruise coming back into Miami, the casino closed earlier than announced because (supposedly) the captain called down to say we were too close to the US. And that was several hours before we were scheduled to dock.

I have twice sailed out of Vancouver. From there to the open Pacific is a pretty good trek. (Is that word appropriate for travel by water?) I can't remember just how long they waited to open the casino the first night.
Doc

I will be boarding a cruise ship in ten days. Looking at the deck plans, and focusing on the casino area, I don't see anything that looks like a craps table. Some ships have them, and some don't. If this one doesn't, I'll be disappointed, but it will probably save me a bit of money.

I just did a little net search and found a number of references to craps being played on the Noordam. Either the deck plan is out of date, or it's lacking in accurate detail. (Craps tables do show up on the casino deck plans for some sister ships.)

I suppose this means I will be subject to the vagaries of variance for three weeks, including seven straight full days at sea.
Doc

The Soboba Casino opened in 1996 and is owned by the Soboba Band of Luiseño Indians. It is located on their reservation on the outskirts of the little town of San Jacinto, on the west side of the huge Mount San Jacinto, which overlooks Palm Springs on its east side.

According to their web site, the casino offers 27 table games, 14 poker tables, and 2020 slots, plus bingo. They have several restaurants and, for entertainment, the Soboba arena (3500 seats) with the only listed upcoming event being a "gladiator challenge." There seems to be more variety available at their bar known as AC's lounge, which has 3 blackjack tables and promos for everything from Monday night football to senior swing dancing to Latin night to a DJ, with live entertainment on the weekends.

That sounds like plenty for what I remember of San Jacinto, but I have only been there once. That was on that April 2009 swing through the casinos of the area, and I was on my way back from Palm Springs to San Diego.

In planning that swing I had read a little article about conflict between the local sheriff and the tribe regarding the goings on at the casino. The sheriff's crew had tried to arrest some tribal members and wound up shooting and killing three of them at the casino. That, of course, led to conflict between the sheriff's department and the tribe. According to the sheriff, the tribal leaders "instructed reservation security guards to block deputies serving search warrants or conducting other nonemergency business on the reservation." In response, the sheriff asked the federal government to shut down the casino. That was the latest news I had heard about the place before visiting, and I have heard no update since.

The chip shown below is a very plain, white Bud Jones chip, with no markings at all except on the center inlay. I guess that shows off the red, black, gray, and orange graphic at its best. 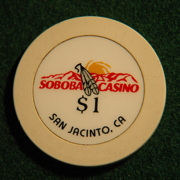 bigfoot66
Joined: Feb 5, 2010
Soboba is another craphole casino. Lousy paytables, no hotel, and the whole property is a tent.
Vote for Nobody 2020!
Doc

Soboba is another craphole casino. Lousy paytables, no hotel, and the whole property is a tent.

Well, yeah, I guess I forgot to mention that it's not quite the Bellagio.
Doc

While there are a number of casinos in the Palm Springs area, the Spa Resort Casino (or Spa Casino, as used in some references -- I'm not sure which is the correct usage when referring specifically to the casino portion) is the one genuinely in Palm Springs. It is owned and operated by the Agua Caliente Band of Cahuilla Indians. Yes, as I noted when I posted my chip from the Agua Caliente Casino, both establishments belong to the same tribe, and the two chips I collected as souvenirs each have one casino mentioned on one side and the other casino on the other side. You can compare the two sides of both chips now, by checking the images below and looking back to the earlier post showing the other sides.

Both chips are from Chipco, just as they were when I posted images of the other sides. ;-)

The Spa Resort was established right on the hot water oasis that gives the town and the tribe their names. The original casino was a tent erected in 1995 right next to the Spa. When I first visited in January 2003 and again that spring, the tent had been replaced by a permanent structure, used temporarily as a casino, and by the time I was collecting chips and got back to pick up my souvenir in 2007, they had an even newer facility in operation about a block away. I think that latest facility opened in November 2003.

I don't know the boundaries of the Agua Caliente Band's reservation at all. If the casino and spa are on it, then it must have an interesting contour. The four rectangular city blocks of Palm Springs that touch the perpendicular intersection of East Andreas Road and North Calle El Segundo contain the following properties, clockwise starting from the Northeast quadrant: (1) the Spa Casino, (2) the Hilton Palm Springs, (3) the Spa Resort, and (4) shared by the U.S. Post Office and McCormick's Palm Springs Exotic Car Auction. Are the Hilton, the post office, and the auto auction on the reservation, or are the spa and casino off the reservation, or do the boundaries somehow fit through that intersection of streets to include the diagonal blocks? I have no idea, but I am curious. 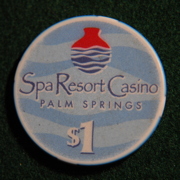 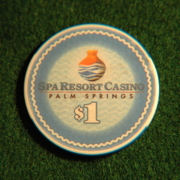 I don't know what it is, but I really like the Spa casino. I don't think I've ever won there, but I still want to go back every time I can (like in 8 days...). My Spa chip has Agua Caliente on the reverse, but my AC chip does NOT have the Spa on the reverse. It's also a much newer and nicer chip. I keep waiting for the Spa to get new chips as well, but maybe they just won't.
"So as the clock ticked and the day passed, opportunity met preparation, and luck happened." - Maurice Clarett
Doc

The Spotlight 29 Casino is owned and (currently) operated by the Twenty-Nine Palms Band of Mission Indians, which explains the 29 in the name. The casino opened in 1995 and from 2002 to 2006 was managed by Trump Hotels and Casino Resorts under the name Trump 29.

The tribe has reservation lands on that side of the park, too, and they have tried to establish another casino there to be known as the Nüwü. Unfortunately, they encountered substantial opposition from the neighboring community, which has had the support of their senator. I thought the efforts had ended when an impact statement determined that construction on the chosen site would adversely impact the habitat of the endangered desert tortoise. They then tried to establish an off-reservation casino, in the town of Joshua Tree, but that encountered opposition also. They were still trying to figure out a way to open another casino as late as this year, but I don't know whether there is any way to be successful against that much opposition. If a casino is ever built, I'm skeptical of its chances of success in such a remote location, with other casinos already in place in the more populated areas.

I visited the Spotlight 29 Casino only once, on that day in April 2009 in which I have already admitted to having screwed up in keeping my records and have been correcting them to "what must have been true" as I post in this thread. My current reconstruction is that I left Harrah's Rincon in the morning and stopped at the Pauma, Pala, Spotlight 29 and Augustine casinos before settling in at Palm Springs for their Villagefest street fair. That's the same number of casinos that I hit the previous day. Sorry, no records or basis to reconstruct how my gaming went.

Since I can't report much on my own experiences, I'll just mention a news item I came across -- it seems that the Soboba Casino with it's conflict with the local sheriff is not the only tribal casino that can make the news. Last May, four people were indicted for alleged bribery and money laundering related to construction projects at Spotlight 29. No, it was not the house or even the players who were engaged in the nefarious activities; it was the tribe's lawyer and some folks he recommended. The tribe just served the role of victim. Here is an initial article, but I haven't heard the outcome, if there has been one.

The chip shown below is a filthy blue and white Chipco product, with the CI logo at the 6 o'clock position. The edge of the chip is mostly blue, with two sections of white (aligned with the blue stripes on the face) with a blue text of the denomination "1" without the "$". 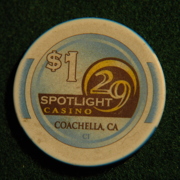 Here's my Spotlight 29 chip. I think that's supposed to be a red sun in the middle of the chip, though I'm not sure. A picture of the sun would be fitting, given the casino's location. My trip to Indio/Coachella/Palm Springs was one of two times in my life that I've been billed for damage to a rental car - after a stack of players cards melted onto the dash over the course of the day.
"So as the clock ticked and the day passed, opportunity met preparation, and luck happened." - Maurice Clarett
bigfoot66

So it plays the same, but it doesn't play the same.

Doublethinking is a very bad habit to fall into :)

This is not doublethink. If I did anything wrong I communicated less than 100% clearly. The game plays basically the same way. To the extent that it plays differently, I find these small differences to be features not bugs.
Vote for Nobody 2020!
RSS Feed