I'll get back to the topic of casino tokens tomorrow, but today's Casino Chip of the Day is a real chip, even if you can't find a place to play this one any more.

Barbary Coast casino was built by Michael Gaugan, son of Jackie and current owner of South Point, at a prime location on center strip, right at the intersection of S. Las Vegas Blvd. and Flamingo Road. In 2005, a lady I know described Barbary Coast as the filthiest casino she had ever been in and said she would never step foot in it again. I took it that she had never been in some other establishments I had visited.

The Barbary Coast chip displayed below appears to be a silver anniversary (1979-2004) commemorative, one of the few commemorative $1 chips I have encountered. The casino did not last much beyond its 25th anniversary in that incarnation.

Barbary coast was part of what became Coast Casinos, which was sold as a block to Boyd Gaming, which still owns most of those casinos. Boyd had plans for a mega-facility to be known as Echelon Place (I probably should link to a photo of the rusting skeleton here) and needed more land, so they traded Barbary Coast to Harrah's Entertainment for the north-strip site where the Westward Ho used to stand. Under Harrah's/Caesars ownership, the casino was renamed Bill's Gambling Hall and Saloon.

In spite of my friend's derogatory description of the Barbary Coast casino, at least this chip does have the casino's name molded into the perimeter, a feature I have previously described as "high-class." The design, with the darker illustration circle being slightly larger than most inserts and extending into the perimeter area, looks very similar to one I have seen on a page at the Gaming Partners International web site, but I do not see any obvious logo, so I don't know for certain who manufactured this chip.

In an effort to encourage more people to read what is posted in this thread (and hopefully join in), I'm going to try to cut back a little on my verbiage, so that's all for this post. 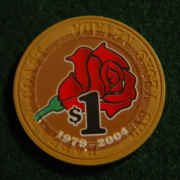 Edit 5/27/12: Check this post later in this thread about UV images visible on this and other chips.
Johnzimbo

Johnzimbo
Joined: Sep 29, 2010
The Barbary Coast holds a place in my heart as it was the first casino I ever gambled in. 1979 (when I was 18 or 19) I went to Vegas for the first time with some friends and their parents. We stayed across the street at the MGM (now Bally's) and one night I got dressed in my leisure suit and walked quickly through the casino floor at MGM and didn't get questioned, so I thought maybe I DO look 21!

Still I didn't have the nerve to gamble so I walked over to the Barbary Coast and right at the entrance from the strip there was a young female dealer standing all alone at the big six wheel. I figured I would pull out a $20 and if she asked for ID I was right by the exit and would just bail out of there...but she took it and gave me 4 red chips. I lost them in four spins of course, and was ready to leave when she says "Your timing is just a little off. You should go have a drink, then come back and try again." OMG talk about an ego stroke hehe! I think I just took my $20 loss and left though :(

The chip below I snagged on a later visit with 3-4 college buddies, 1981 or 82. We were sooo broke we were playing $1 keno tickets and asking for drink tickets each time, then taking them to the bar and of course not tipping. We got cut off before we even caught a buzz, sadly.

Doc
Joined: Feb 27, 2010
Thanks for the photo, Johnzimbo. I think that Barbary Coast just opened in 1979, so you might have one of their original chips. Even in 1981-82, it might not have been as "filthy" and my friend claimed. Seeing your report of playing Big 6 at 18 or 19, I think that with tomorrow's Casino Chip of the Day I will have an appropriate opportunity to mention a small amount of under-age gaming that I participated in.

Edit: That comment about what I would have an opportunity to mention with tomorrow's chip of the day was a mental glitch. I had just told the story 15 hours before in this post. Senility can be a bitch.
TIMSPEED

TIMSPEED
Joined: Aug 11, 2010
I didn't post the Bally's coin becuase Lucyjr posted the exact same one I have (and mine is as beaten up as theirs)
HOWEVER, I DO have a pristine Barbary Coast coin, which I'll post when I get home later.
Gambling calls to me...like this ~> http://www.youtube.com/watch?v=4Nap37mNSmQ
Doc

HOWEVER, I DO have a pristine Barbary Coast coin, which I'll post when I get home later.

Excellent. I'll look forward to seeing that one.
Wizard
Administrator

Barbary Coast was a red-light district in old San Francisco, California. Geographically it constituted nine blocks bounded by Montgomery Street, Washington Street, Stockton Street, and Broadway. Particularly notorious was Pacific Avenue, one of the earliest streets to be cut through the hills, which led directly from the wharf to the center of town, near Portsmouth Square.The neighborhood quickly took on its seedy character during the California Gold Rush (1848–1858). It was known for gambling, prostitution and crime. It is now overlapped by Chinatown, North Beach, Jackson Square, and the Financial District.

-- Source: http://en.wikipedia.org/wiki/Barbary_Coast,_San_Francisco
It's not whether you win or lose; it's whether or not you had a good bet.
Doc

The name Barbary Coast comes from a formerly seedy section of San Francisco.

Good info to know -- I just thought it was a reference to Morocco.
ddloml

ddloml
Joined: Dec 5, 2009
I remember a network television show in the 70's titled "Barbary Coast" that was set in San Francisco during the CA gold rush days. I believe the show starred William Shatner (something to do between "Star Trek" and "TJ Hooker"!).
DJTeddyBear

I remember a network television show in the 70's titled "Barbary Coast" that was set in San Francisco during the CA gold rush days. I believe the show starred William Shatner (something to do between "Star Trek" and "TJ Hooker"!).

Yep. It only lasted 14 episodes. Details / confirmation: IMDB's entry for Barbary Coast.
Superstitions are silly, childish, irrational rituals, born out of fear of the unknown. But how much does it cost to knock on wood? 😁
pokerface

Most of the enjoyment in a collection is the stories behind
what you collect. Just amassing vast quantities of something
isn't satisfying, its a job.

If that "something" is money, and with vast quantities,
then I don't mind the enjoyment
winning streaks come and go, losing streak never ends.
RSS Feed