Even though it is hot as "heck" in the Summer in Vegas, and that is particularly true this Summer, the best time for Mrs Q to travel is in July. So, here we are !

We flew out on Sat June 19th and it was a pleasant surprise to find no line at all at the taxi line. We started out by staying at GVR for 2 nights. My daughter caught a later flight and met us there. It is definitely a nice place with decent Deuces Wild VP, but even after playing for hours, no quad dueces for me. So the trip started out for me in a small gambling hole.

We usually don't spend much time at the pool, if any. But we checked it out one morning and it was nice to find plenty of lounge chairs and large umbrellas. We did treat ourselves to one round of the $ 17 fancy-pants drinks. Mrs Q got a spicy margarita and my daughter and I both agreed it was too spicy for our tastes.

We would definitely work GVR back into our next vacation plans IF we can get another comp'd room or at least a nice discount.

I took an UBER over to the local Enterprise location and rented a car for a week, using my corporate discount to avoid the post-covid crazy high rental car rates. I'm gonna miss that when I eventually retire. Got a free upgrade, so that was nice. AND, the agent said I could return it at the Strip location at the Westin, which I ended up doing.

My younger brother flew in on Sunday, and my older brother flew in with his wife on Monday. I got my older brother a large suite at a deep discount, and we stayed in a regular room but on the same floor in the nicer Jubilee tower. Their room was ~800 sq ft and it had a nice couch, so that became our meeting place for a drink ( or two ) before heading out for dinner. Since my wife and I both used our Diamond discounts, my younger brother made his own arrangements but he's been to Vegas before and got a decent rate.

Tuesday was Hiking Day at Big Falls trail in the Mount Charleston area. I posted a description of that side-trip already here:

but here is one picture: 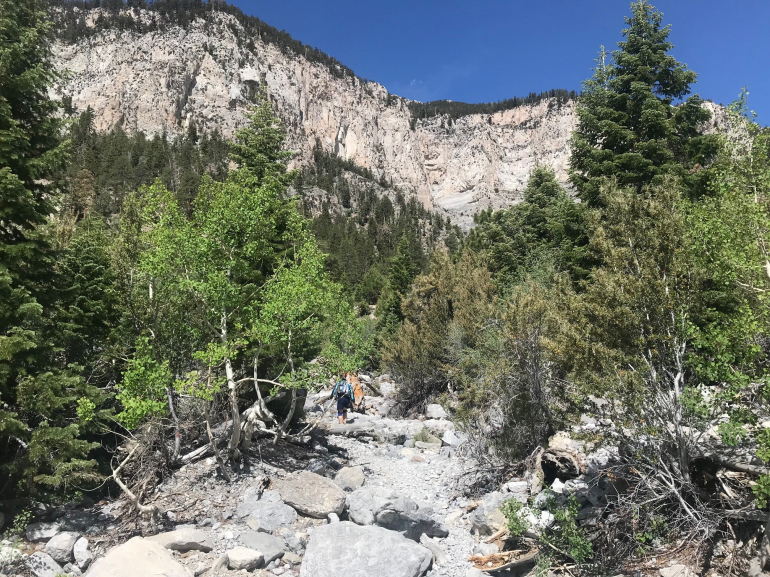 It doesn't look like I need to worry about them getting over their heads, my brother's wife enjoyed playing Nickel video poker, one line and one nickel at a time. They eventually cashed out up 20 % ( $ 6 out vs $ 5 in ). Last of the High Rollers !

We also did OMEGA-MART at Area 15. That's gonna require a separate post, "there's a lot there to unpack there". But to summarize, it is pretty cool but kind of expensive and I suspect that most forum members here aren't going to be that impressed with it. However, having said that, by all means make a trip out there and walk around for an hour and see the other free art installations.

Another side-trip was to the new location of the Pinball Hall of Fame. Lots more pix here: 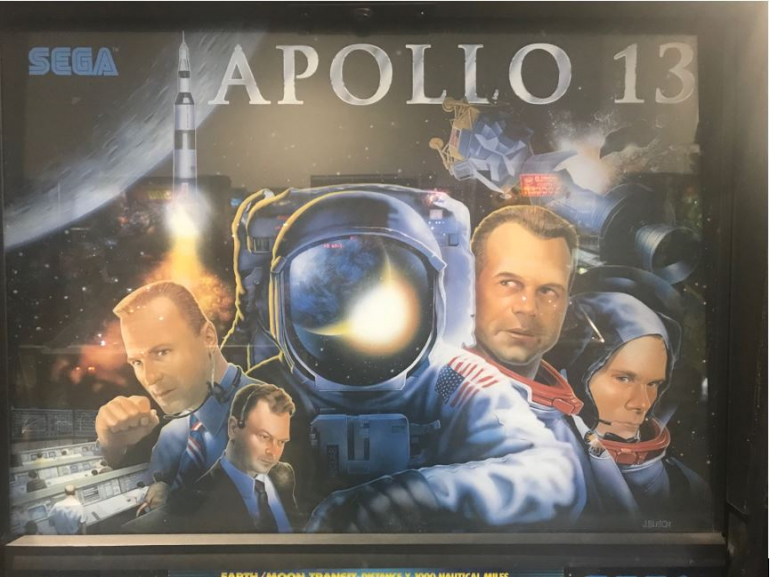 I can't believe they forgot to include the main star of the film on the glass, hahaha.

Another friend from back home also met us out there, and that was a bonus because she loaned me her Player's Club card so I could get in and out of M-Life parking garages for free. Woot.

She is a "foodie", so even though it wouldn't have been my first choice, we ate at Din Tai Fung one evening. It was nice for a change of pace. My wife and daughter also went to the Caesars Bachannal buffet one evening, so my brothers and I ended up at Ocean One Grille in the Miracle Mile Shops at Planet Hollywood for $ 7 burgers and $ 3 beers/frozen drinks. I recommend it for an easy and reasonably priced sit-down meal. I ended up eating there twice so far this trip and both times the wait to get in was short.

We also did Nine Fine Irishman at NYNY one evening using a 2 for 1 myVegas reward. While we were waiting for our reservation time, I looked up their VP offerings on VPFREE2.com. That's when I hit a RF on a dollar denom machine. I called my wife and she came over to see the hand-pay. Woot x2 ! 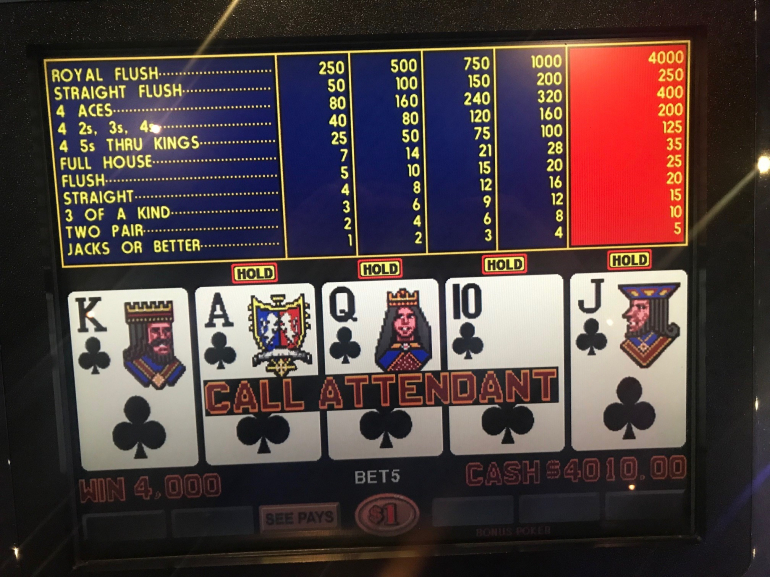 After round one of our "guests" went home by the weekend, another couple from back home flew out and joined us for the start of week 2. They had a late flight, but we picked them up at the airport. They got stuck on the tarmac for what seemed like forever so we waited and waited and waited. But at least we were able to accomplish two things on the same trip: dropping off our "foodie" friend for her flight and picking up our friends. Given this experience, however, if we ever have a similar situation, I don't think my "taxi-service" will still be offered.

We needed to break up our stay at Caesars to re-set the calendar on comp'd rooms. Originally my plan was to drive down and stay at Laughlin, but we ended up paying for an extra night at Bally's to avoid having to pack and unpack and repack and unpack for just one night.

But we did pack up and go to Aria for 3 nights using myVegas rewards, this was our first time staying there. We just had to pay the resort fee, so that felt like a good deal to us. We parked in the garage and it was a long walk to the lobby, and Mrs Q tried the electronic check-in but that didn't work, so back to the lobby to get a regular key. Mildly annoying.

The room was nice, but I didn't expect a high floor on a myVegas freebie, and we didn't get one. So we didn't have much of a view from the 3rd floor but like I said, the price was right. AND, whenever possible, I try to stay at a new place (or do one brand new thing) each trip. The room had his and her sinks in the bathroom, which is a nice touch when traveling.

I posted some pix of that already here:

but this one is my favorite: 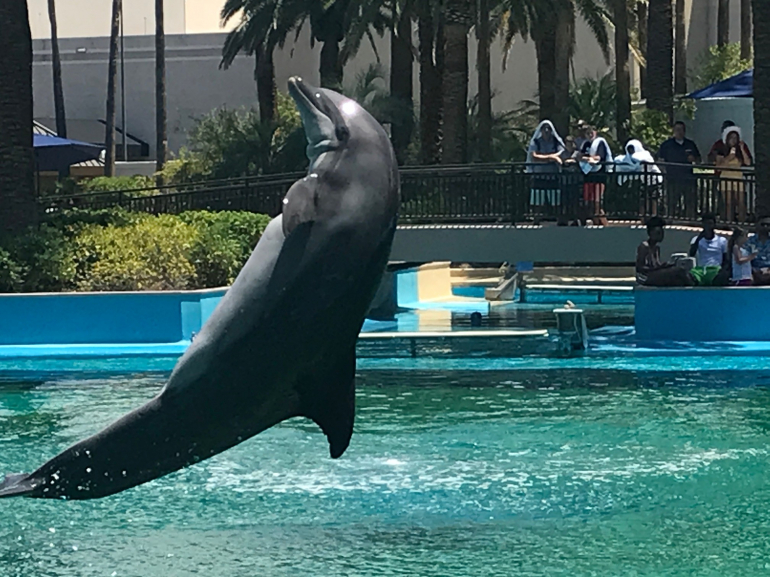 STAY TUNED FOR MORE...........
Last edited by: JohnnyQ on Jul 3, 2021
Like the castle in its corner In a medieval game; I foresee terrible trouble And I stay here just the same
darkoz

I suspect they didn't forget the main character on the glass of the Pinball.

His image probably carried a hefty price tag for it's use.
For Whom the bus tolls; The bus tolls for thee
Keeneone

I suspect they didn't forget the main character on the glass of the Pinball.

His image probably carried a hefty price tag for it's use.

Tom is in his spacesuit with the sun visor down on the pinball machine. :) 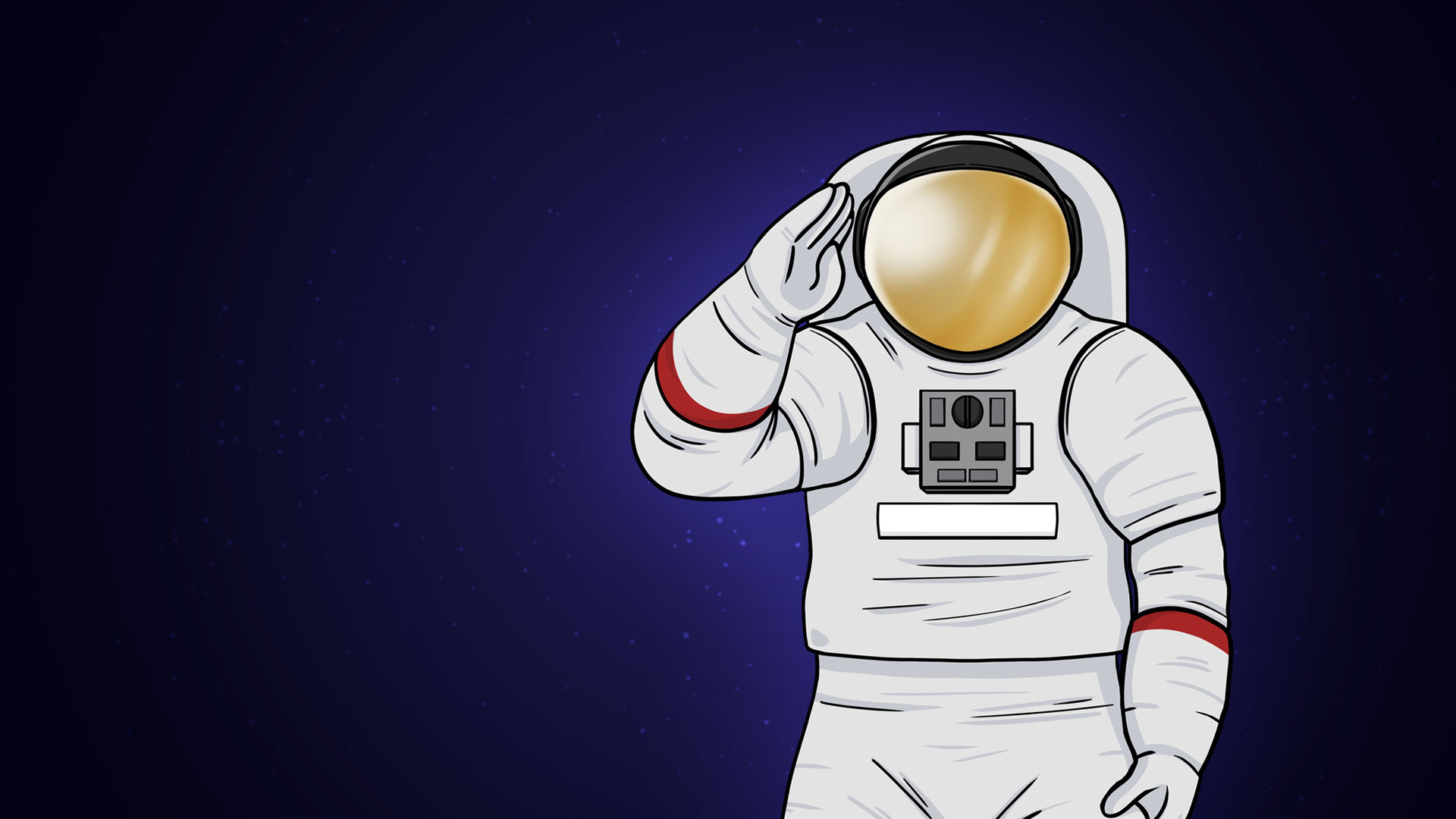 And nice to see Lt Dan and Forrest re-united in Apollo 13 !
Like the castle in its corner In a medieval game; I foresee terrible trouble And I stay here just the same
JohnnyQ

I am more of an Ellis Island kind of guy. Can't beat the Steak special breakfast for $ 6.99.

BUT we also really like Batista's Hole in the Wall right across from Bally's. Entrees from $ 24 and up, including salad, bread, AND all the White and Red wine you care to drink. Woot x3.

Just call ahead for a reservation, the atmosphere inside is OLD SCHOOL Vegas Italian, much much nicer than you would think from seeing the outside next to the Stage Door Casino / Liquor store next door.

Like the castle in its corner In a medieval game; I foresee terrible trouble And I stay here just the same
DeMango

DeMango
Joined: Feb 2, 2010
Did not know you were a notorious AP that needed camo
When a rock is thrown into a pack of dogs, the one that yells the loudest is the one who got hit.
JohnnyQ

Did not know you were a notorious AP that needed camo

Haha, well not yet. Of course if I were, would I admit it if I wanted to keep a low profile ? Anyway, just fyi, your profile picture didn't turn out too clearly either !
Like the castle in its corner In a medieval game; I foresee terrible trouble And I stay here just the same
JohnnyQ

We couldn't get this room entirely comp'd for the 4th of July weekend, but it isn't going to bankrupt us either. I think the separate his/her sinks and separate closets is a nice touch. The shower stall is nice and big, and the bed is comfortable.

The view is pretty decent as well. I would look into booking this type of room again for whenever our next trip turns out to be. 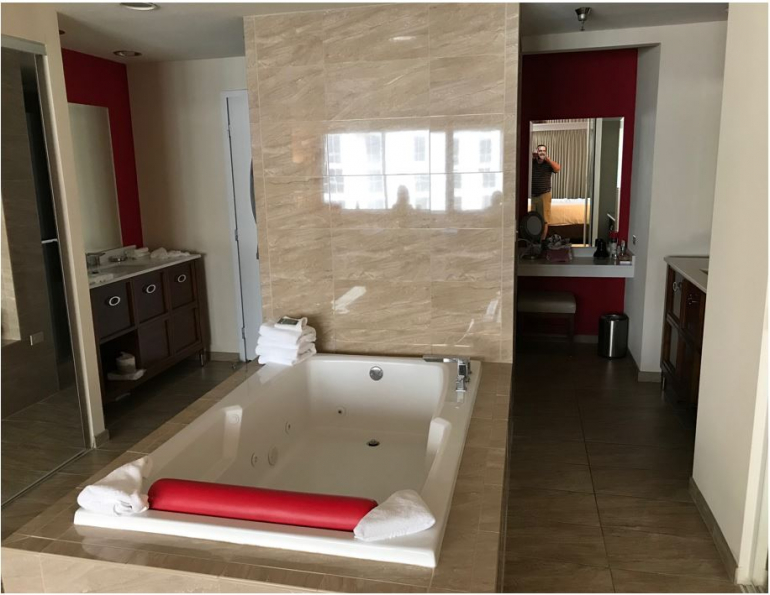 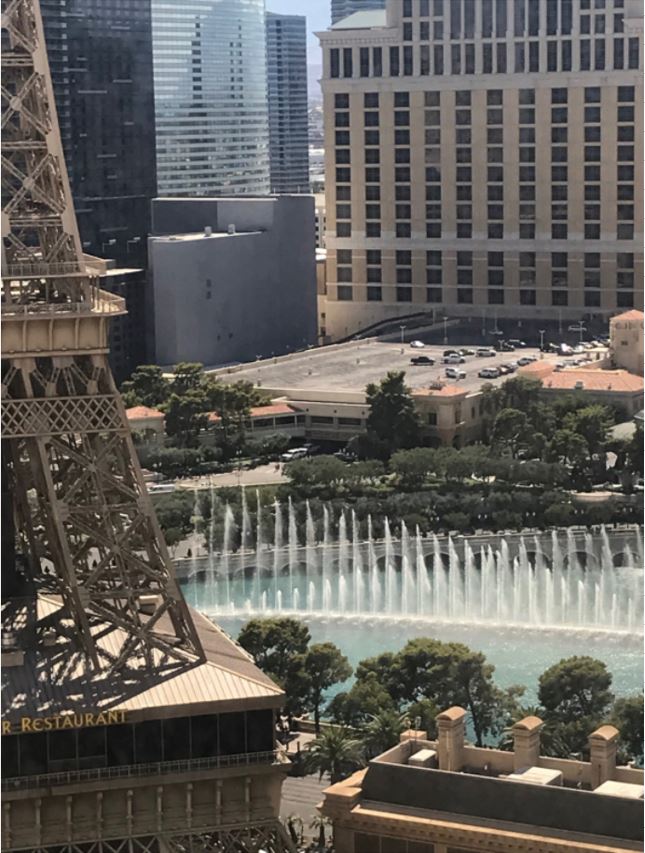 Here's the restaurant in the Miracle Mile Shops that I mentioned: 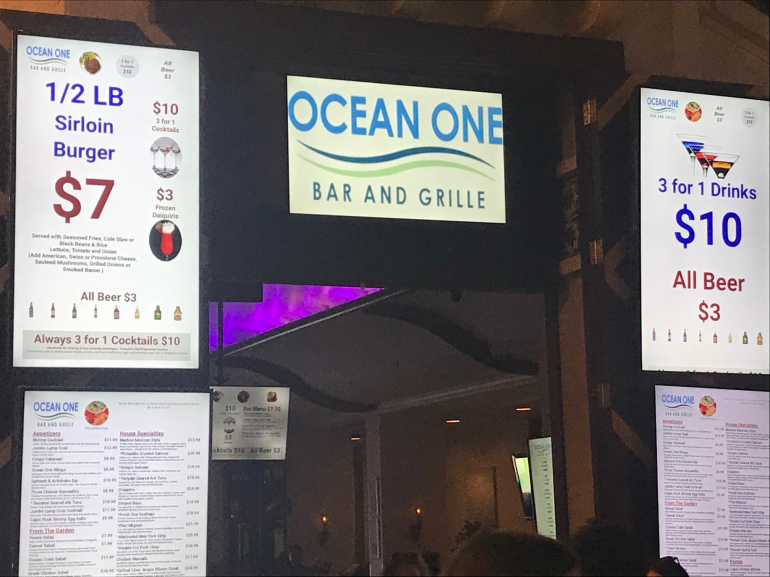 Last edited by: JohnnyQ on Jul 4, 2021
Like the castle in its corner In a medieval game; I foresee terrible trouble And I stay here just the same
JohnnyQ

JohnnyQ
Joined: Nov 3, 2009
We walked over to the Bellagio parking deck to watch the fireworks last night. We could see several of the buildings where they were launched from, and we had some "elbow room" vs being on a sidewalk on the Strip. I took some videos but didn't get any still pix. I'll see if Mrs Q did. 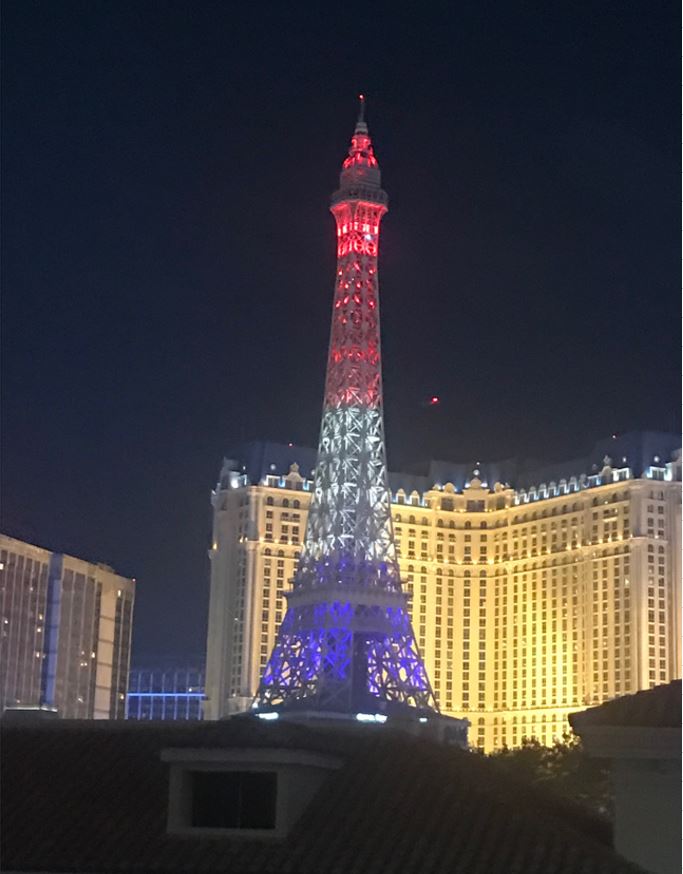 I bought this postcard, and even though it doesn't have anything to do with this trip exactly, I thought it was fun because the HARMON tower is in it: 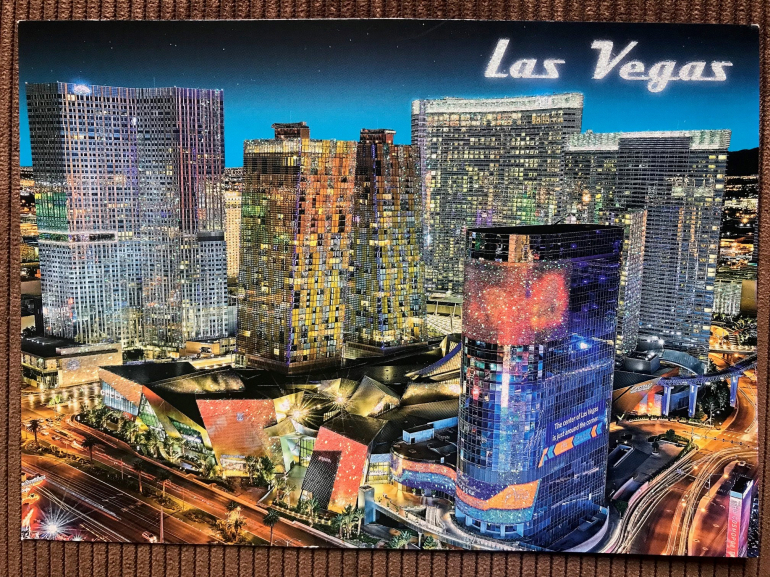 Like the castle in its corner In a medieval game; I foresee terrible trouble And I stay here just the same
JohnnyQ 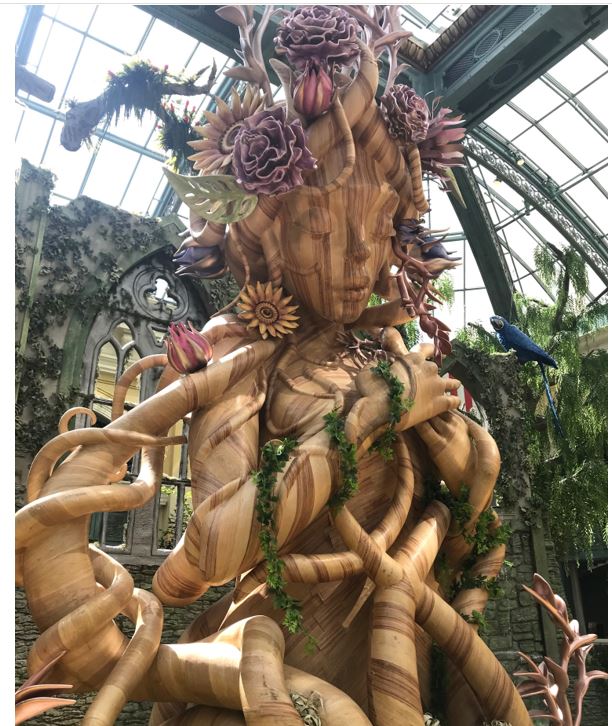 I had some time and a car for one day so I drove down I-15 to see the Seven Magic Mountains art installation. I drove back on Las Vegas Blvd to see what there was to see.

There wasn't too much to see, lots of development of new housing I guess. I stopped back at the Pinball HoF. 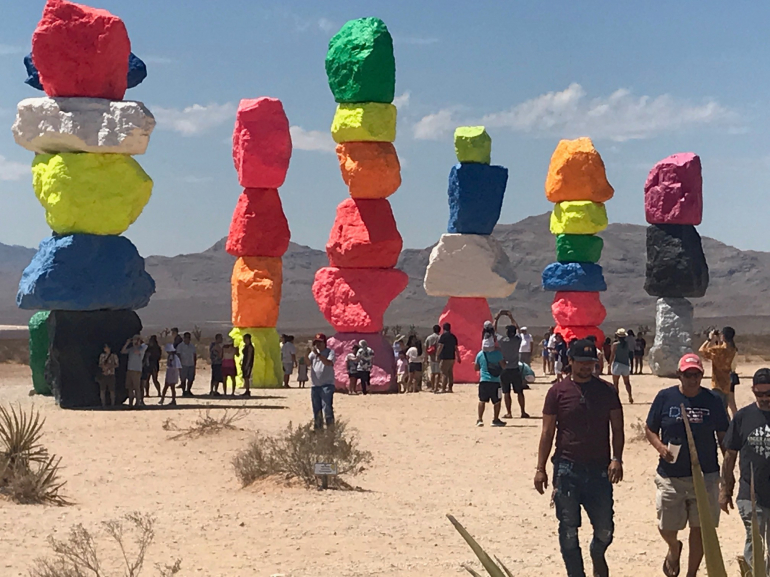 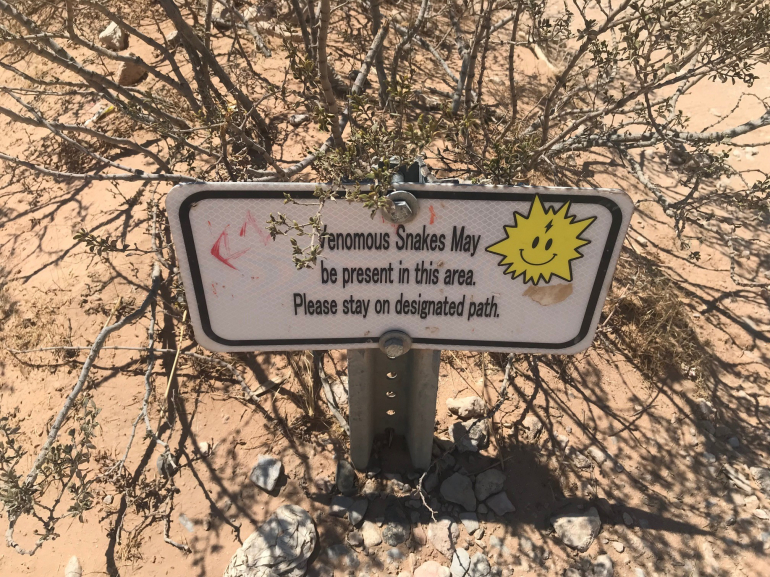 Like the castle in its corner In a medieval game; I foresee terrible trouble And I stay here just the same
RSS Feed