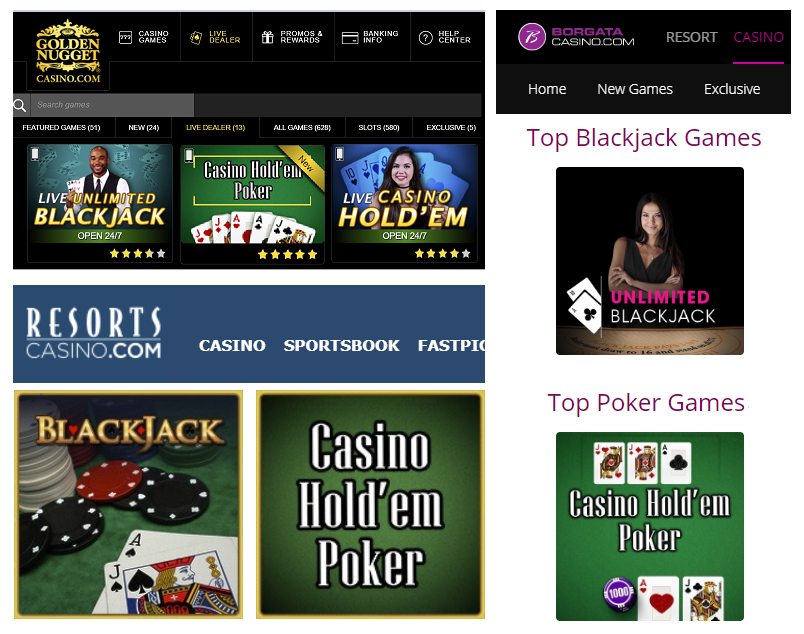 VIDEO: This Week in Gambling: PartyPoker US network coming? http://bit.ly/2FSFhcT

4. Parliament Passes Bill on State Regulation Of Gambling
Europe (Ukraine) - Ukraine Business - The Verkhovna Rada of Ukraine has passed bill No. 2285-d on state regulation of activities of gambling establishments…It is proposed in the bill to limit the number of licenses issued for gambling houses and to introduce mandatory verification of gamblers while receiving bets and registration of wins in the online monitoring system.
The government’s bill proposes to determine gambling areas at five-star hotels for casinos and at three-star hotels for slot machines. http://bit.ly/2u8XaRW

6. Harrah’s Reno to turn into Reno City Center
Nevada (Reno) - Jason Hidalgo, Reno Gazette Journal - Say goodbye to Harrah’s Reno and hello to Reno City Center. The longstanding gaming icon in the heart of downtown Reno is set to undergo a transformation as a mixed-use property after its sale to Las Vegas-based real estate group CAI Investments. The hotel-casino was sold by VICI Properties and Caesars Entertainment for $50 million. http://bit.ly/2FZQEQ9

7. Harrah's Steak House ending its 52-year run with sale of casino
Nevada (Reno) - Johnathan L. Wright, Reno Gazette Journal - Harrah’s Steak House opened on May 26, 1967, at the start of the Summer of Love, but from the beginning, the restaurant never seemed to be of its time: not the late '60s of protests and ponchos, not the 2010s of Amazon and apps. The restaurant — a profusion of thick carpets, low lighting, upholstered booths, polished service and Continental classics — always seemed to exist out of time, somehow, in a clubby place where folks lingered over conversation, where a martini in the afternoon was no bad thing. http://bit.ly/3ahHDA2

8. Harrington named vice chair of Casino Control Commission
New Jersey (regulation) - David Danzis, Press of Atlantic City - Sharon Anne Harrington was selected to serve as vice chairwoman of the Casino Control Commission for the upcoming year. Harrington, 65, of Bradley Beach, will serve as vice chairwoman of the three-member commission for the eighth time in 10 years. Following Wednesday’s appointment, Harrington said it was a “great privilege” to have been selected. http://bit.ly/375t2Wc

9. Lawmakers re-launch Congressional Gaming Caucus
National (legislation) - Deke Castleman, CDC Gaming Reports - The Congressional Gaming Caucus has been re-launched for the new session of Congress and provides a platform for discussing federal policy issues related to the U.S. casino industry. Co-chairs Rep. Bennie Thompson D-Miss., and Rep. Guy Reschenthaler, R-Penn., said the caucus, made up of more than 30 representatives, will help educate colleagues in the House of Representatives on related regulatory and legislative matters. “Relaunching the Congressional Gaming Caucus is one of the American Gaming Association’s top priorities,” said AGA CEO Bill Miller. “As gaming expands, it’s more important than ever that members of Congress from both gaming and non-gaming states appreciate the important role our industry plays in communities across the country.” http://bit.ly/2RqgSAQ

10. Why Indiana Sports Betting Grew in December While Iowa Flattened Out
Iowa/Indiana (sports)- Matthew Waters, Legal Sports Report - Indiana continued its growth trends with December’s sports betting handle up 9.9% over November to $161.8 million. More than $100 million of that, or 63.4% of the total, came from DraftKings Sportsbook‘s and FanDuel Sportsbook‘s online operations. Indiana revenue also rose 28.9% to $12 million, according to the state report. Iowa, on the other hand, posted a slight decline in a new sports betting market. The handle fell 0.1% to $59.3 million in December, while revenue dropped 19.3% to $2.9 million. Indiana looks more and more like a good candidate for a case study for states looking to legalize sports betting the right way with a competitive market and no restrictions on mobile. http://bit.ly/2TspV6Z

11. Indiana gives thumbs up to Gatorade and other Super Bowl prop bets
Indiana (sports) - Jessica Welman, Play Indiana - When it comes to the Big Game, Indiana sports bettors are going to have more to bet on than what takes place on the field. The Indiana Gaming Commission (IGC) recently approved a list of Super Bowl prop bets Indiana sportsbooks can take bets on. From the coin toss to the Gatorade celebration, there are plenty of options. http://bit.ly/2FTTbvp

13. Two Tribes Partner to Buy Historic McKay Tower in Grand Rapids
Michigan (Indian gaming) - Levi Rickert, Native News - There was a sense of history and excitement in the air Wednesday afternoon as representatives of two tribally-owned investment firms announced the purchase of a historic building in the heart of Michigan’s second-largest city….representatives of Gun Lake Investments, owned by the Match-E-Be-Nash-She-Wish Band of Pottawatomi Indians of Michigan (commonly known as the Gun Lake Tribe) and Waséyabek Development Company, owned by Nottawaseppi Huron Band of Potawatomi, announced they had partnered to buy the 18-story Greek revival-style tower for $17.5 million. http://bit.ly/2R4KkgR

15. Sports betting in Navajo casinos draws closer
Arizona (India gaming/sports) - Bill Donovan, Navajo Times - The Navajo Gaming Enterprise is getting closer to a time when it will be able to offer visitors to its casinos an opportunity to bet on their favorite sports teams…Brian Parrish, the interim CEO of the enterprise, is confident that everything will be ready for patrons to bet by March Madness, the playoff period for NCAA college basketball. http://bit.ly/373fkTM

16. Tule River Tribe continues long push to relocate casino
California (Indian gaming) - Indianz - The Tule River Tribe continues to make strides toward moving its casino to a new location in California. The tribe just entered into a memorandum of understanding and intergovernmental agreement with Tulare County. The government-to-government documents were approved by the board of supervisors on January 7. The development comes after the Trump administration gave its blessing to the tribe. Plans call for the Eagle Mountain Casino to be moved to a more accessible 40-acre site near the Porterville Airport Industrial Park. http://bit.ly/2TxbPkw

17. Comparing Oklahoma casinos to Arkansas' is 'apples to bananas'
Oklahoma (Indian gaming) - Randy Krehbiel, Tulsa World - In making his case for extracting more gaming proceeds from the state’s Indian tribes, Gov. Kevin Stitt has repeatedly made reference to Arkansas, where one Oklahoma tribe has opened a casino, two others are competing for the rights to another and the top tax rate for casino gambling is 20%... Quapaw Chief John Berrey, whose tribe opened a casino in Pine Bluff, Arkansas, at the end of 2019, said Arkansas and Oklahoma are “like comparing apples to bananas” when it comes to gaming. http://bit.ly/2TxIGWG

21. Uncle Mo Colt Commands $400,000 at January Sale
Kentucky (racing) - Blood-Horse News - The adage that public auction buyers will find yearlings perceived to have the best chance at future success regardless of catalog placement played to perfection during the Jan. 15 third session of the Keeneland January Horses of All Ages Sale when an Uncle Mo colt sold for $400,000. http://bit.ly/3agh9yM

24. Embattled Phoenix Thoroughbreds re-affirms commitment to racing
Global (racing) - Horse Racing Nation - In late November, reports surfaced that Phoenix Thoroughbreds founder Amer Abdulaziz had emerged in U.S. federal court testimony as a “key figure” in an international money-laundering scheme involving a fake cryptocurrency called OneCoin. Abdulaziz was alleged to have stolen more than 100 million Euros as part of the scam and then used the illicit funds to build a worldwide racing and breeding operation. Phoenix Thoroughbreds again denied the allegations while doubling-down on their commitment to the thoroughbred industry. http://bit.ly/2swuu50

MrCasinoGames
Joined: Sep 13, 2010
Golden Nugget Online launches FIRST Branded Video-slot game in the US. http://bit.ly/2NAjn2q
With this launch, the GoldenNuggetCasino.com continues to feature a large selection of online slots, video poker, table games, and Live-Dealer, with more than 700 online games on desktop (and over 600 accessible on mobile phones and tablets).

Thomas Winter, SVP & General Manager, Golden Nugget Online Gaming said, "By bringing our iconic brand into the new Golden Nugget Video Slot, the first of its kind in New Jersey, we continue to demonstrate the never-ending commitment of GoldenNuggetCasino.com to providing New Jersey’s online casino patrons with the best and most diverse online gaming experience. http://bit.ly/2NAjn2q 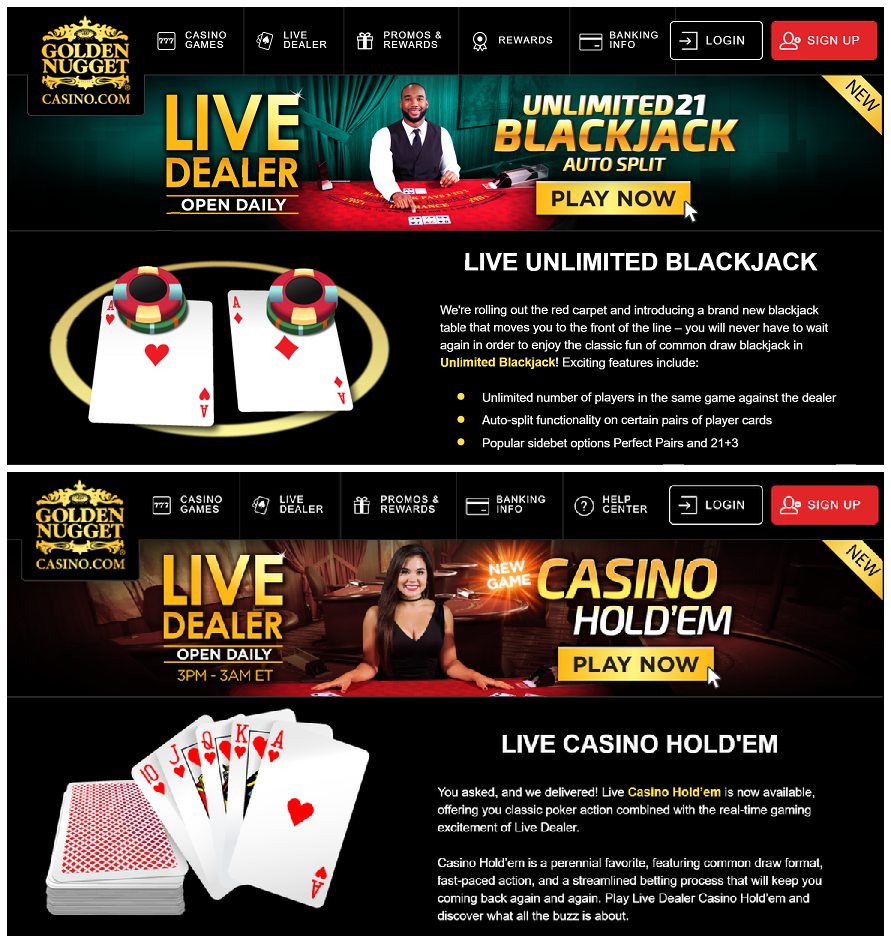 MrCasinoGames
Joined: Sep 13, 2010
1xBet and NAVI eSports sign a cooperation agreement. http://bit.ly/2tr9JIs
Yevhen Zolotarov, CEO of NATUS VINCERE:
“If I had been told recently that NAVI would work with 1xBet, one of the largest betting companies in the world, and a partner of such an iconic club as FC Barcelona, I would not have believed it.
Now it has become a reality and the partnership between... http://bit.ly/34vOKkZ

6. Casino Hold'em® by NETENT.
* FREE-Play on Mobile or PC: CasinoHoldemNETENT.com 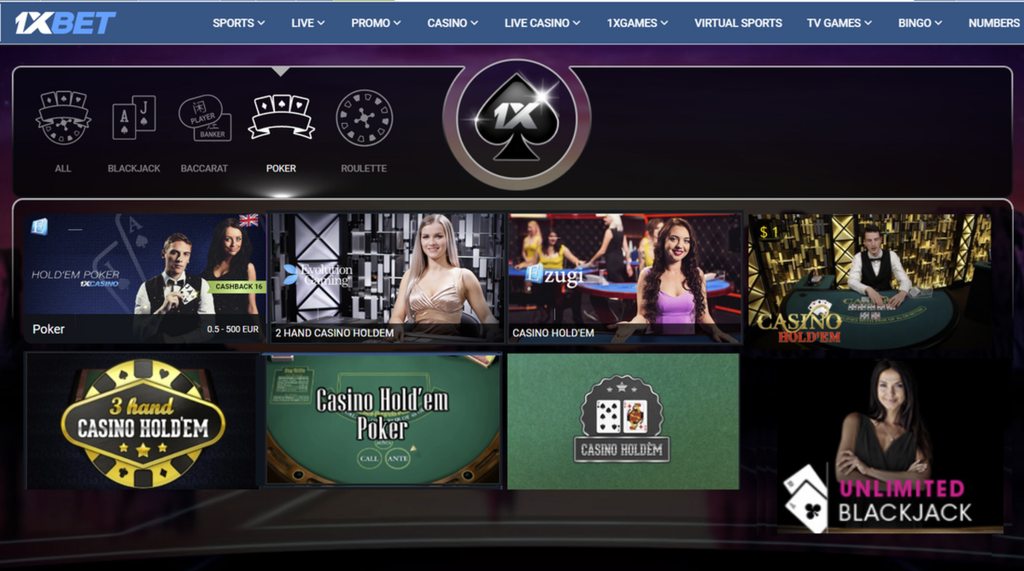 1. Gambling revenue in Pennsylvania hits record in 2019
Pennsylvania (results) - Associated Press - Wind Creek Bethlehem finished second statewide among the state’s 12 casinos with revenues of $522 million. Wind Creek ranked first in table games with $237 million, and third in slot machines with $285 million…revenue statewide rose in 2019 by $ 4.5% 2018 to above $3.4 billion… http://bit.ly/2Rv3gEa

4. Crown inquiry over license suitability to start Jan 21
Oceania (Australia) - GGRAsia - The gaming regulator in New South Wales says the first hearing of an investigation on whether casino firm Crown Resorts Ltd breached its gaming license for its Barangaroo project in that Australian state is to take place on Tuesday, January 21. http://bit.ly/2trrjMk

5. Atlantic City ‘going in wrong direction’
New Jersey (Atlantic City) - Wayne Parry, Associated Press - The CEO of Hard Rock International says Atlantic City “is going in the wrong direction” and is in worse shape than when the global entertainment company bought its casino there nearly three years ago. Jim Allen said the company is willing to be part of the solution in Atlantic City, http://bit.ly/30u1Yxo

10. MGM Resort’s ‘asset-light’ strategy is good for the company
National (finance) - Howard Stutz, CDC Gaming Reports - Before the year is out, it’s possible MGM Resorts International won’t own any of the casinos the company operates in the U.S…As a casino operator, http://bit.ly/374bs5b

12. Lottery sales sink as other gambling options take off
Illinois (lottery) - Chris Tye, WBBM - As sports wagering emerges in Indiana and online gambling expands in Illinois, the outfit that gets us to scratch and win may be scratching their heads. In the last six months of 2018, http://bit.ly/38df5pi

13. Powerball: Nobody won the jackpot, pushing it to $321 million
National (lottery) - Andrew Sharp, Delaware News Journal - Feeling bad about not winning the Powerball on Wednesday? It might comfort you to know that nobody else did either. http://bit.ly/2R3oWs3

21. Recommendations from report on Mongolian Groom can be widely applied
California (racing) - Matt Hegarty, Daily Racing Form - Recommendations contained in a report released Wednesday examining the fatal injury suffered by Mongolian Groom in last year’s Breeders’ Cup Classic can be implemented at racetracks with far less prestige and personnel than those that host the year-end event, http://bit.ly/2u8Ab9S

22. Been Studying Her gets turf test in Santa Anita
California (racing) - Mike Willman, Horse Racing Nation - KMN Racing’s homebred Been Studying Her, a two-time stakes winner on dirt, will try turf for the first time on Saturday as she heads a field of 12 sophomore fillies in the $200,000 California Cup Oaks, http://bit.ly/38hRPGM

23. Anna's Bandit to Open 2020 Season in Geisha Stakes
Maryland (racing) - Frank Angst, Blood-Horse News - After closing 2019 with six consecutive wins, Anna's Bandit will look to extend that streak when she makes her 6-year-old debut in the $75,000 Geisha Stakes Jan. http://bit.ly/38lCaGn

(Part-1)
ThePOGG Interviews – Stephen Au-Yeung: http://bit.ly/2Zo2Gvs
Stephen Au-Yeung started out his career in gambling as a successful advantage player and poker player, making his living at the card tables and winning several titles along the way...

ThePOGG: Your website states that you started out playing Blackjack and Backgammon.
How did you originally come to be interested in gambling?

Stephen: My family, like so many Chinese, came to Europe from Hong Kong and began working in the catering industry.
The irregular and unsocial hours helped to direct my leisure time towards the local Casinos (in the UK) which at the time stayed open till 4 a.m. during the week... http://bit.ly/2Zo2Gvs 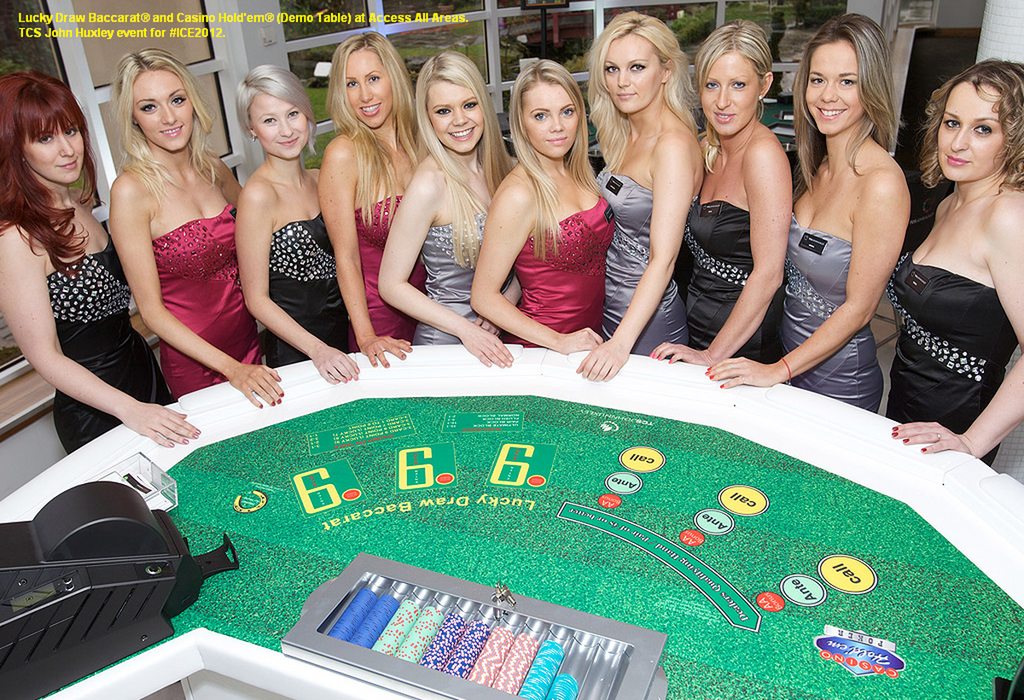 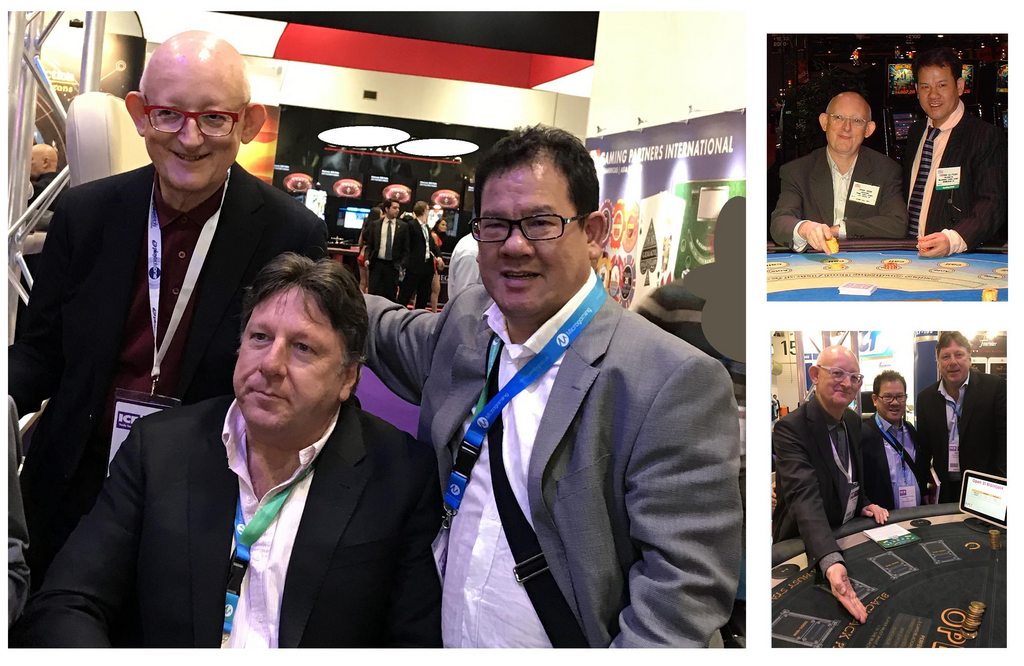 RULES: Raiseem3CardDraw.com
Raise'em® 3-Card Draw-Poker™ is a Three Card Poker game where the Player has the option to either stand with his dealt hand, or exchange one card and bet a 1x or 2x Raise on his draw.
Player does not compete against the Dealer.

1. Each Player makes an Ante-bet, and two Optional Side-bets.

3. Each Player must either stand pat with his hand (no additional bet), or exchange one of his cards by wagering a Draw-bet equal to 1x or 2x the Ante-bet.

4. Player’s final hand determines the payouts, as specified in the Pay-tables. 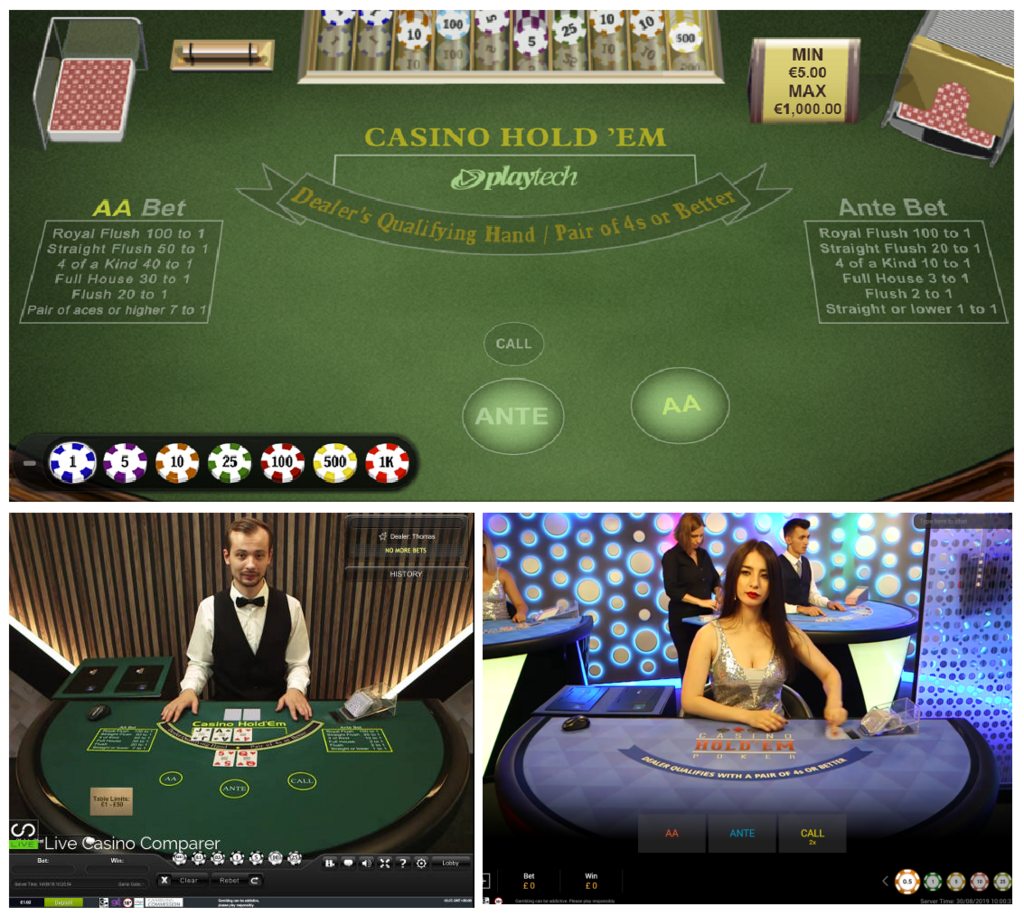