1. Basically, this website strips out other websites. In my earlier post, I wrote AP’s from bj21(dot)com were upset when the VBJ machines got removed & it was several respected hard core VBJ players from bj21(dot)com that verify the 99.7% number. So in the future, I will be more careful about websites.

In summary, we all play differently. As I get older, I use less composition dependent plays. But the truth is it’s all muscle memory for me ... my body play on autopilot since I played this game for so many years.

PS This is my opinion about the full pay version: the biggest question was how the game treated split aces. I was so happy when I finally got the hand: split aces and catch face on each hand against dealer’s ace upcard. Dealer ends up with a BJ so my two hands pushed and I shared this information with my contacts. That meant when IGT gave us a rule not listed on the screen, they also changed the check for dealer blackjack on split aces. For example, if you split aces and if either don’t catch face, both hands will lose to a dealer’s BJ. I don’t think M Crimm was that anal-retentive to pick this up. The big players on bj21(dot)com will pick it up since they usually play $100 a hand. It’s a big distinction. My point is IGT gave us something but it also took something away at the same time.

On the S17 version, it will not let you split aces if dealer has a BJ with ace showing.
bobbartop

And I don't even hesitate, I don't slow down at all. Automatic hit.

Obviously EVBandit has given me a lot to chew on. So has Hugo. I will thank both of you for your input as I try to isolate the mistakes I have been making and make some adjustments.

Also, searching this forum has led me to other helpful advice from FiveSpot and others.
'Emergencies' have always been the pretext on which the safeguards of individual liberty have been eroded.
bobbartop

I'm not arguing or disagreeing, but I don't see why 8-deck or single would differ on 6-card Charlie.


Hugo, as I said in a previous post, I am forced to reconsider and correct mistakes I have been making. Thanks to you, and now EVBandit, your two heads were better than my one.
'Emergencies' have always been the pretext on which the safeguards of individual liberty have been eroded.
HugoSlavia

Obviously EVBandit has given me a lot to chew on.

Me too, but I can't resist talking while I chew.

it was several respected hard core VBJ players from bj21(dot)com that verify the 99.7% number.

For decades, Northern Nevada tables have dealt 1D H17 D10 with an EV of 99.56% according to CBJN. The video (full pay) version adds DAS, LS & 6-card win; but removes resplitting beyond 2 hands. I would have guessed 99.75% EV because DAS & 6-card are each worth ~0.1% while LS cancels out the resplitting penalty. But you also mentioned another factor which reduced EV a little: the loss of split aces when dealer has BJ.

What's the best available even-money game? Some machines allow DAS and you can draw to split aces with 21s beating a dealer 21. But LS is not available. Now the EV should be >97.7% imo.

I'm not a BJ21 Green Chip subscriber. Am I missing anything there? I had membership several years back, but it seemed all the best information was communicated offline if at all.
bobbartop

I've never seen an old game like that that uses two decks. Interesting. However, lately, there are brand new games where you have a choice, single deck or double deck. Rules the same on both options, and I assume a fresh shuffle each hand. I'll grab a photo next time I'm in front of one. 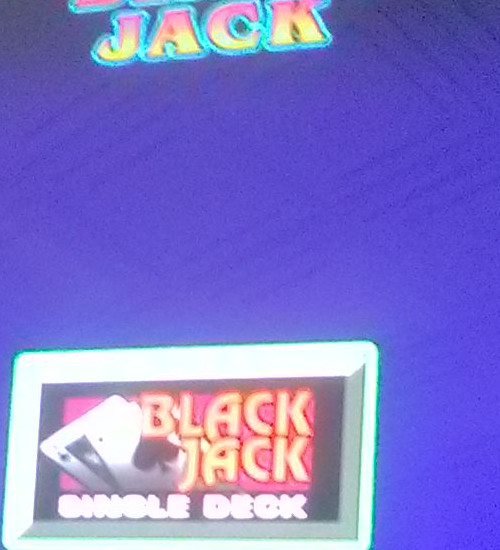 'Emergencies' have always been the pretext on which the safeguards of individual liberty have been eroded.
tringlomane
tringlomane
Joined: Aug 25, 2012
Thanks for this post from:

I stay away from those heads up poker machines. Beat me pretty good when I tried them. Congrats to the wife getting a royal!

I think even money BJ and no splits or doubles is 95.7%. Sad that IGT has apparently had the numbers wrong for years...
smoothgrh

Huh. Interesting that they're highlighting the "single deck" aspect. Of course, the deck is shuffled every hand, so you don't get the traditional advantage with single deck—including 5 for 2 payouts presumably!
smoothgrh

I stay away from those heads up poker machines. Beat me pretty good when I tried them. Congrats to the wife getting a royal!

Thanks! Too bad there was no bonus for the royal!

I played the heads up poker game "against" Johnny Chan at the Venetian way back when (maybe 2012?) and was excited to have taken a few bucks from him. So the wife and I are undefeated against that game! (How does the casino keep it on the floor???)
RSS Feed